Because of reasons, I need a sword that needs to be on fire and still be effective. I've found nitinol, a shape memory alloy that when hot reverts to a preconfigured shape. If it reverts, would it actually STAY in shape when it's thrusting or slicing an opponent? According to this other forum it should work as good or better than steel as a standalone blade when at room temperature.

As for being on fire, I need it to burn for at least 10 minutes, but 30-60 minutes would be very convenient. I figured it could have a small tungsten shell hollow built into the spine of the blade (single-edge blade) that has a store of oil inside. This would communicate heat to the blade but still take the brunt of the heating effect. Otherwise the character could carry an urn of oil and just lather the blade with it, but how long would you conjecture that would last?

Character is 1.5x stronger than a warrior-joe, so there's some leeway in terms of weight though not a whole lot.

As an extension to the initial I thought I could take some magical liberty and say that's a blade that never loses its edge because it uses the thermal energy running through it to maintain edge alignment and structural integrity.

Could all of this work? Or at least is it a small stretch? Thanks!

Nitinol, by what I can find about its properties, could in theory be usable for a blade. It is harder than typical sword steels but doesn't seem to be particularly brittle and its density is slightly lower than steel's. There are two concerns I have: the material might not be stiff enough to work as a weapon, its elastic modulus is considerably lower than steel's. Furthermore, if I understand the mechanics of its memory shape properties correctly there are temperature ranges to be observed. If the blade is on fire for prolonged amounts of time, this might not be a positive change.

As to the method of creating the flame: fire needs oxygen to burn, so you can hardly have it happen on the inside of the blade in a closed tungsten tube. My first question here is what you need the fire for: is it enough for the blade to be hot, or do you need flames on the outside? And how hot and how fiercely burning do you need it to be?

Following Will's research on GoT's flaming sword, a few channels seems to be enough to produce a visually satisfying effect. Assuming we can preserve the blade's structural integrity while milling a low amount of narrow channels into it which are filled with a non-flammable but absorbent material, storing fuel inside the weapon could be feasible. I would caution that as soon as the fuel store isn't full, the liquid will swap around, making the sword much less agile to wield. I'd also assume that using the hilt and/or pommel would make for a better fuel store than the blade, as blades need to be rather thin in order to be able to cut.

For fuel itself, Kerosene should be the best compromise between long burning and practical flame. Diesel produces a lot of soot and isn't that easy to ignite, although it burns for longer, and alcohol burns out very quickly. There are longer burning solid fuels - Hexamine is quite popular these days - but a solid fuel would require a much more complex construction that frankly I can't think of a way to make work. Ten minutes at a minimum is a long time to burn for liquid fuel though and your storage space is massively limited.

Maybe a special scabbard construction that also contains fuel and coats the blade in it while it's inside could add to the burning time? In any case I don't see this working without modern technology. 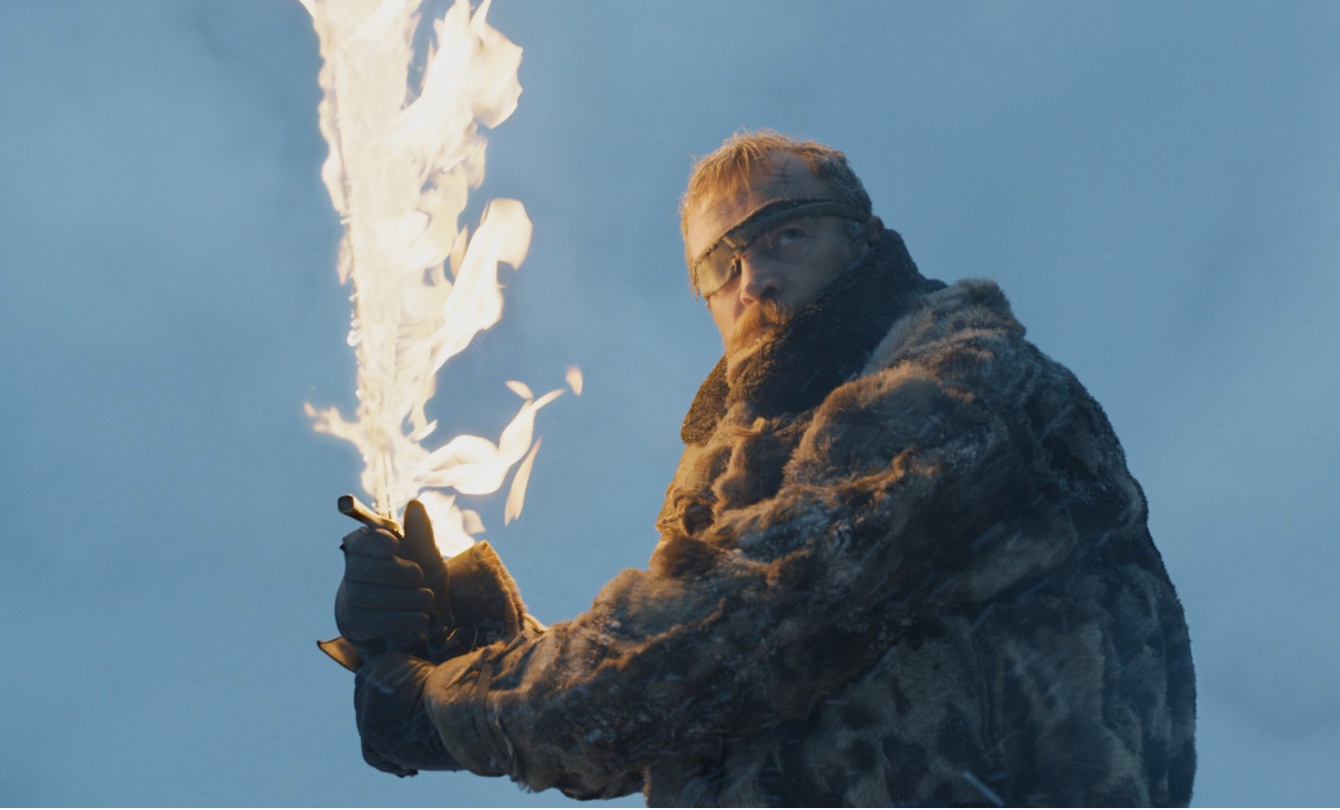 I have been curious how they did the burning sword on Game of Thrones. A chance to read up! I found this.

The fight-sequence sword is a real sword that the workshop team milled with a number of channels, each one stuffed with a dura-blanket material. The flame retardant fiber is then soaked in IPA (isopropyl alcohol). This was then covered in another layer of material to make the blade look uniform and sword-like again. Because of the length of the sequence, the flame has to last (and burn strong) for at least 3 minutes, which was something of a challenge, as the fuel burned off so quickly.

In the prop sword they had mineral wool fabric reservoirs in the sword that hold the alcohol. Which is pretty similar to what you propose with the store of oil inside the sword coming out. I was surprised (and skeptical) to read that they used isopropyl alcohol. Those flames are strong - I thought probably turpentine or kerosene. The higher the molecular weight of the fuel, the longer the burn time.

One could have higher molecular weight fuels which would burn longer but the problem is they will go out without the ample gas phase fuel. I think it is the lack of a big surface area / oxygen interface. You can make that work with pitch or tar but it is because the structure of the torch distributes the fuel over a bristly rope or straw surface; that would not work with a sword. Watching videos of burning magnesium or white phosphorus - they either burn like mad for a second or two or go out.

Maybe a mix of tar and kerosene - kerosene to provide the gas phase / surface area and the tar for extra flame and heat? A problem with that as a prop is that bits of flaming hot tar might fly off and stick to things.

Or the best: marshmallow creme!

4
Critique this Plasma Weapon Design
4
How feasible would this weapon design be in the medieval era?
8
Weapon design: a conceivable superheated sword capable of cutting through most things
23
A steel-cutting sword?
15
Best Ergonomic Design for a handheld ranged weapon
7
Is my plasma weapon design any good?
6
Design for an Extendable Melee Weapon?