How long would it take for the planet to recover from an apocalyptic event? [closed]

The best example for what I am trying to describe would be the worlds of Adventure Time, and The Dark Tower series.

These worlds both developed following a cataclysmic war that destroyed a relatively modern/advanced civilization, after which the by-products of the war (basically radiation, but it's technically not radiation so not bound by those rules) mutated the surviving flora & fauna as the world recovered.

I'm currently working on a world similar to these, with the apocalypse occuring in the late 1980's/early 1990's. In this world, the planet has more or less fully recovered. Although there are sure signs of the apocalypse, ecosystems like forests and other lush environments once again exist.

My question is how long would it take for the world to recover following an apocalyptic event that wiped out 90% of the worlds plant/animal life?

I will define "recovering" as the reappearance of robust and diverse eco-systems regardless of whether or not those ecosystems are even remotely similar to the pre-apocalypse. As far as human habitability goes, just assume that in these recovered/mutated worlds there are edible flora/fauna.

To address the comment concerning what the remaining 10% of life consists of/ if it is concentrated in one location or not:

I would say that the remaining 10% of life consists of random populations of certain random species scattered all over that just happened to be lucky enough to survive the main cataclysmic event of this apocalypse because of geographic protection, as well as species that are simply resilient enough to survive (No getting rid of those tardigrades)

EDIT: I specified that the "radiation" was not technically radiation because my world isn't constrained by the mutagenic effects of real life radiation, however I'm realizing that doesn't help anybody answer my question.

When it comes to contamination just consider it normal radiation/nuclear waste.

Let's start with the ugly stuff.

Nuclear fission produces the really ugly radition, but it goes away quickly. Fusion doesn't produce anywhere near the same fallout radiation, but what's left over takes forever to go away. My source suggests the fission problems follow the "rule of 7." Every 7 days the radiation drops 90%. From this perspective, the surface is "radiation free" (or, basically the way we live today) in less than 100 years.

But that's not the problem.

Fusion produces (listen to me sound like I know what I'm talking about. My thanks to that source!) ...produces tritium and C-14 carbon. These can be absorbed into DNA and therefore cause mutations (usually death-dealing cancer, but who knows, there might be a spider-man out there!). Tritium's half-life is about 12 years, but C-14's half-life if almost 6,000 years. That means the plants are mutating... and anything eating the plants are mutating... for six millenia. Ugh.

But that's not the problem.

The problem is the consequence of being forced to adapt to those circumstances. 6,000 years isn't enough time to evolve, only to adapt. No new species, but maybe improved species. At least, "improved" in terms of radioactive tolerance. The problem is that once DNA is affected, it can take forever and a day to weed out the genetic (and potentially hereditary) anomolies. The radioactive carbon is gone in 6,000 years (no new mutations! Yay!) but the genetic defects will take who knows how long to go away.

That's the problem, the time it takes real and honest evolution to work out the genetically weak and leave only the genetically strong. That could be a long honkin' time. 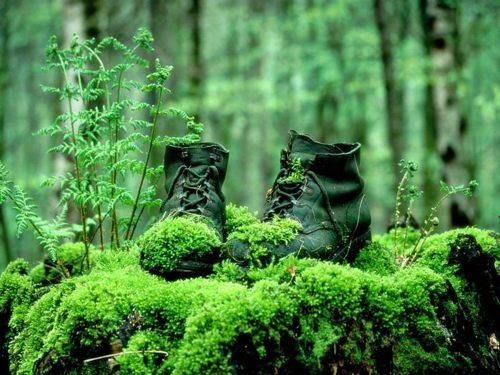 As another person mentioned, what in your mind constitutes recovery?

Using Chernobyl as an example, nature is taking back the area around the damaged power plant rather quickly. In the decades since the accident, forests have sprung up regardless of former human activity. Even as it takes back, it doesn't completely heal itself. The buildings and traces of man are still there, but every season nature takes back more and more. But how long is long?

Using an old growth conifer forest as an example, if you log an area within the forest, it will take at least 600 years for the forest to make that clearing indistiguishable from the other parts of that ecosystem.

Damage done to areas with permafrost take even longer to heal. Roads and paths abandoned for over 100 years will still be easily identifiable.

During the last big extinction event at the end of the Permian–Triassic period, 90% of life on earth was wiped out. This included insects, plants, marine animals, amphibians, and reptiles. Life that was on the earth bounced back in a few years. Anything that could capitalize on the event did very well. However, for full recovery of species and biodiversity took 30 million years.

So in a major apocalyptic event where 90% of all human and animal life is snuffed out, we might lose large animals like elephants or manatees, but in a few years you'd see trees springing up, rats running around and a limited amount of animals capitalizing on the environment. For new species to appear and all traces of the apocalypse to recover, it would take millions of years.

Here are the issues you need to navigate:

What is the extent of "Recover"?

What is the event?

Answering these drastically changes any answer

If recover means plants and animals exist then it can be anywhere from a few months to a few millenia depending on the disaster. If recover means human habitable the answer could be never. As a specie we depend on certain food sources to survive. If there are no edible plants or animals we cant survive. If the cataclysm wipes out all of them and no new ones evolve to replace them or we dont save any then we are toast.

As for the cataclysm itself: if its a simple meteor that blots out the sun for a year then you could see recovery within a year. If its a big enough meteor to cause a whole plate to flood with lava like what they think is what caused the permian mass extinction, then it could be thousands of years. There are also plenty of man made disasters that could be a killer each with different variables.

--UPDATE-- If the scenario is a nuclear war:

What usually is considered the planet killer is the immense amount of debris and fallout blotting out the sun. Some projections believe this would last for about a year but could be longer depending on how much of the surface is blasted. (if 10% of species survived then it wasn't a total firestorm)

After this period of time you would begin to see recovery as photosynthetic organisms can again begin to live. The radiation is a definite prolonger of this recovery however not an inhibitor. Plenty of plants can survive high levels of radiation. Even chernobyl is covered in plant life now. Animalian life is tricky, some organisms are more resilient than others. This would definitely affect evolution as more resilient creatures would thrive.

Not the answer you're looking for? Browse other questions tagged environment post-apocalypse or ask your own question.

33
How realistic is a dirty bomb for area-denial?

28
How would societies be if created and populated only by young people?
5
How long would a planet take to recover from a large asteroid impact?
5
What kind of Apocalypse might make a planet unrecognizable within a few centuries?
14
Why would post-apocalyptic men be twice as large as women?
15
Mass extinction because of too low CO2-levels