I am developing a small (semi fantasy) medieval town and sketched out the basic topography. I sketched layers free-hand on acetates to separate terrain, roads, etc. The areas in boxes are where I see farmland, town and fishing areas ... figures in approximate meters.

It is based on more or less a single valley entrance with sea access. I want to know whether I have anything wrong with the topography. 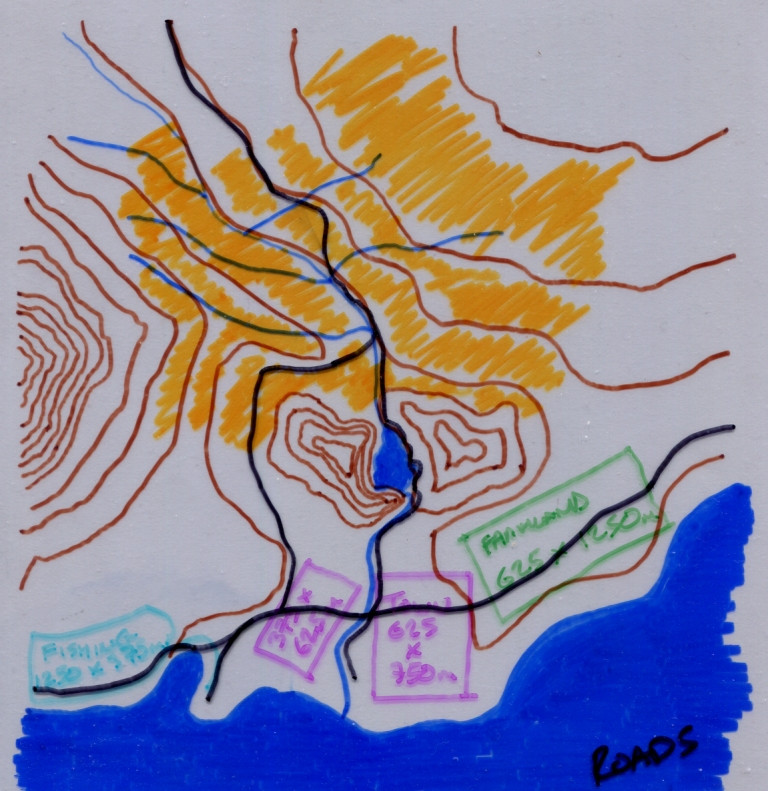 EDIT - The brown shading is a forest

EDIT - Further to queries on what the question is:

Basically, all I am asking is whether or not the topography in the draft map actually makes sense or if I am making any fundamental errors. I intend to build the town(s) around the geography so I just want to get the basics right.

Thanks for the comments so far.

This is kind of an unanswerable question but wth,

1) in a medieval town why would fishing be zoned? Usually people fish wherever they feel like. Commercial fishing would lead to ports which is where towns would crop up. In this map I like the placement of your town however fishing would be going on in the stream and coastline which would also make for a nice harbor.

2) You have what looks like a mountain followed by a quick transition into flatland for farming and then coastline. Normally, that terrain is to uneven for farming and better suited for animal husbandry. The area you zoned for fishing, being between 2 mountains would more reasonably be level enough for farming.

3) I'd like to add, instead of the fishing industrial zone, what you would more likely see is a logging industrial zone. As the town grows from the fishing and farming, the need for building material would increase. There would probably be a satellite wood harvesting community north of the lake and hills but on the stream so they could float supplies into town.

Not the answer you're looking for? Browse other questions tagged reality-check medieval map-making or ask your own question.

10
How do I design a map that looks old?
39
How to go about creating an “inaccurate” map?
3
Graphically represent (map) multiple spatial dimentions
6
Default map projection
22
How to create accurate map with white spaces?
11
Map generator for big world
7
Designing a map by morphing an existing island
16
Is this map realistic/believeable?
2
Does my climate map work?
6
Is my biome/climate map realistic?