How to explain electricity discovery and usage in 12th century?

I am thinking about an alternative - history scenario, where humans were able to discover and use electricity, in a 12th-13th century. I don't need any complex devices, I want to make society study focus on electricity usage.

What would be the most reasonable explanation for it and where this discovery could have been made?

EDIT: OR what would be first possible time for humanity to start studying electricity if it was impossible during 12th-13 century?

Something related to the Baghdad Battery.

It is a set of three artifacts which were found together: a ceramic pot, a tube of one metal, and another rod. Early hypothesis suggests that the pot was filled with wine, vinegar, or other acidic juice, to build some sort of what we know now as galvanic cell (some sort of battery).

For example in a manuscript rediscovered in the sack of Constantinople in 1204.

I don't know why they would use electricity when mining was a big problem, but it could be a plausible start.

Amber polarization by rubbing with wool cloths and electrostatics where the first phenomena to be noticed. From there to starting playing around with capacitors (Leyda bottle and similar) was a short step.

It looks like you might get to notice electricity and some related phenomena, but you will lack the mathematical ability to understand it. This is not a problem, at the end ships kept floating without understanding of the buoyancy principles. You won't get any divergence theorem or any Maxwell laws, but still you can get some empirical knowledge.

Which environment would be the more likely to trigger the discovery of electricity? Well considering that amber, wool, gold, silver, copper and glass where available to a well established merchant, it could have happened that a curious member of a wealthy merchant family started playing with electrostatic and found how to build a bottle to store it (and play funny tricks to other family members during dinners...).

From that the jump to playing with saline solutions the step is doable, and some alchemist can start adding on the table also acid and solutions with gold/silver. Whops, you have found how to gold/silver plate vile metals!

Not exactly a full answer, but half an answer at least:

I think it would be somewhat plausible that someone could accidentally invent the Leyden Jar 500 years early if they were experimenting with tangentally related things, like a means of keeping food (particularly pickled food) fresh or using foil for reflecting the sun for heating things. 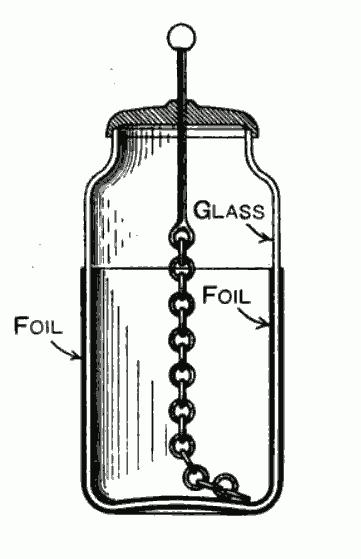 I'm fairly certain the effects of glass and mirrors in conjunction with light to generate heat were well known, so I can see how someone might think "a glass jar wrapped in foil will help heat things". The metal rod in the top might simply be intended as a makeshift handle.

Electricity is a complicated concept that really wasn't discovered, investigated, and formalized as a concept by any one person. Instead there was an entire western scientific community that was exploring it over a period of centuries. Going from Gilbert's experiments isolating electrical attraction to Edison and Tesla was about 300 years.

I honestly don't think all this was doable in even that kind of time-frame without the printing-press. You need some kind of mass communications infrastructure that would allow that amount of educated people to collaborate and hear about each other's work. The Renaissance period (whether people realize it or not) is essentially synonymous with "after the printing press".

If I were to try to do it before then, I'd go with something like the following:

In the early medieval period, when Christianity was competing with German Heathenisim in Europe, there was a bit of a setback. Perhaps the son of Harald Bluetooth was electrocuted ringing a church bell in attempt to scare off the "air demons" in a lightning storm. It was pointed out to the king that this was clearly Thor's displeasure, and that He obviously makes a special target of all those pointy-steepled Christian churches. Non-Christians all over Europe make a habit of erecting giant crosses in open fields near storms, just to celebrate when Thor strikes them down.

Ensuing events set back Christianization of German areas by centuries. This caused the Catholic church to see lightning strikes on churches as an existential threat to the church, and to devote their top minds to the effort of studying lightning. The effort would also have the full support of the entire international communications infrastructure of the church. The greatest minds of Christendom were sought out and educated specifically for this purpose. Everyone down to the local parish priests was trained to consider identifying smart kids to their bishops as part of their duties.

With this system in place, this one topic had the finest minds in Europe working on it. Perhaps three generations of Newton-level thinkers were devoted to the task (where without this effort they would have wasted their lives as serfs).

The part I'm kind of fudging here is somebody (perhaps a Pope?) having the insight that lightning was a natural phenomena that can be studied, rather than an "act of God". I'm not entirely sure the Medieval mind was capable of that jump.

When you clean your amber with wool you electrify the amber. This was noted even by the ancient Greeks. Then by accident someone who was doing this in rather dim circumstances could notice the spark he creates when holding "cleaned" amber and touching someone else.

Then after many many years (because all observations would be done by naked eye so that would take time) they would experiment with machines that would hold the amber while the wool cloth is moved around it.

You know, the ancient machine when you have amber in the core and wool brushes are moved in a circular motion by hand. Kinda like our modern hand phone chargers.

If you have someone who really made it their life's work to dig into electricity, static charge was noted by the Greeks after all, so it wasn't unknown in the 12th century, it just wasn't understood.

Provided they could study to the exclusion of all else they could potentially make a couple of breakthroughs that would get others interested in continuing the work. The math for unifying magnetism and electricity or even for properly quantifying electrical phenomena isn't there, but you can use things you don't understand.

We lacked the math to explain radio for a long time while we were using it for Morse.

Not the answer you're looking for? Browse other questions tagged alternate-history .

6
Feasibility of electricity and interior lighting through early medieval technology, in my Medieval Fantasy universe?

8
Impact of a modern man with a graphing calculator being dropped into WW2?
12
Present time travelers in bronze age - how much could they boost technological development?
13
How could a time-traveler change a medieval society if he can prepare and bring something from our time?
47
Is this alternate history plausible? (Hard Sci-Fi, Realistic History)
8
What if the Trinity test had ignited the atmosphere? Could we survive?
4
Could a society attain 1800s technology if limited to using copper and bronze?
6
Alternate History: A European Empire in the Middle Ages - Feasibility
6
Cost and efficiency of naval vs railway transport in mid-19th century
14
Moving the US capital to the Midwest before 1900?
11
What are the most important factors in determining how fast technology progresses?