Can a planet's axial tilt turn to always be facing its star? 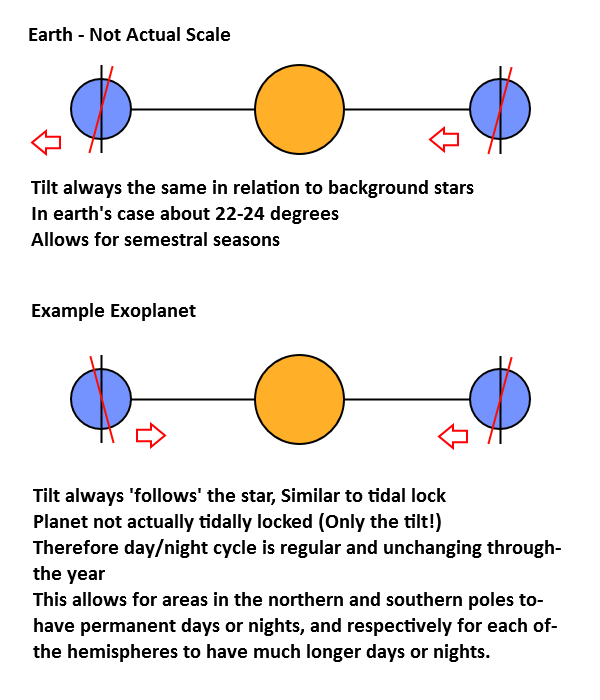 In my particular scenario, There is an habitable exoplanet in which the axial tilt turns to always face the system's star, and the planet is not in tidal lock, this allows for a certain range of scenarios which i would like to explore, such as the perpetual days and nights in the poles, and the much shorter (or longer) daytime periods in any point above or below the equator, and how any native lifeforms would have adapted to survive such a peculiar system.

In short, i'd like to know if it is possible for the tilt to always be the same relative to the stars center of mass (instead of the position of background stars which are relatively unmoving) and if the planet would need or can absolutely not have any other orbiting bodies? would the planet have to orbit the star, or would the star have to orbit the planet? what would be the planet's required mass? what would be the stars required mass? would for that particular system the star and the planet have to be orbiting each other in a pseudo-binary system?

For any other clarification, this particular scenario is a rough mash of light sci-fi and magic fantasy, so if theoretically this planet could exist with some changes to the basic rules of the universe without completely tearing the universe apart, please do tell me! even if this planet is completely impossible, any information that i could obtain will come useful in any future worldbuilding scenarios.

Let's take the Earth as an example.

The simple, first-order calculation of precession -- ignoring for the moment the effect of the Moon -- shows that the precession rate depends on the mass of the star and on the orbital semi-major axis $a$ to the minus third power ($a^{-3}$). The precession period the Earth would have if only the Sun mattered would be about 40,000 years. The only feasible way to increase the precession rate is to reduce $a$ by moving the Earth closer to the Sun. ("But won't this make the Earth hotter?" I hear you ask. Yes, it will.) Reducing the Earth's orbit by a factor of 34 should do it ($34^{3} \approx 39,000$) -- except that now the orbit is so small that the Earth's year is only 2.2 days long! So we have to move the Earth closer still....

There is, in principle, a magic point where precession rate = orbital period, because precession rate goes up with $a^{-3}$, while orbital period goes down with $a^{-1.5}$. Using the simple formula, they equalize if you reduce the Earth's orbit to about 1/1200 of its original size. However, at this point, the Earth's "year" is only about 12 and a half minutes. Also, the Earth is deep inside the Sun -- only about 20% of the way out from the center to the Sun's surface -- so the simple approximations we've been using are no longer valid. (And it's very, very hot.)

In reality, the Moon also contributes to precession, and its contribution can be amplified by moving the Moon closer to the Earth, which doesn't have the problem of simultaneously reducing the length of the Earth's year. So if you move the Moon about 34 times closer, you could in principle boost the precession rate due to the Moon to about once/year. This would put the Moon just barely outside its Roche lobe, so it probably wouldn't break up (unless its interior was molten, and then maybe it would). Of course, having something like the Moon that close would mean enormous tides, which would brake the Earth's rotation (and cause the Moon to move outward); a more stable situation would have the Earth's rotation tidally locked to the Moon's orbit, so the Moon would never move in the sky as seen from the Earth, and the day would be about 3 and half hours long. But having the Earth rotate faster would reduce the precession rate (which is proportional to $1/\omega$, where $\omega$ is the Earth's rotation rate), so you'd have to move the Moon even closer.... In the end, I don't think you can avoid having the Moon so close that it be torn apart by tidal forces. Which would be a shame, unless you like rings.

Sure it can but you'd quickly (geologically speaking) evaporate the planet, you'd need about 1.4*10^27Nm of torque annually to get the axis of rotation to precess 360 degrees per year which is what you're asking for, that's going to produce 1.4*10^27j of waste heat. To put that in perspective one megaton is 4.18*10^15j so you get the equivalent of 291,666,666,666 million tons of TNT worth of waste heat annually (it's almost exactly 0.1% of the sun's total constant output). Earth weighs 5.97*10^24kg so that's 234.5j per kilogram per annum for the entire planet from core to exosphere, that will heat the whole planet by roughly 0.25K a year every year, you'll melt the whole planet inside of 6800 years and evaporate it en masse after only 11800 years. That assumes you start from a completely solid lump of pure silica which the Earth is not, it will take far less time to vapourise an Earthlike world.

It seems to be clear from the other answers that if the planet's axial tilt were non-zero, then it would be pretty difficult to achieve what you're looking for.

Well you could make the planet have an axial tilt of zero degrees. In that case, the "tilt" would always be the same with respect to the star. Of course, this wouldn't create some of the possibilities that you wanted to explore:

such as the perpetual days and nights in the poles

However, the absence of axial tilt (and consequently, seasons) would result in other peculiar phenomena that you might be interested in. What if an Earth-like planet had no axial tilt?

It would mean to change in the course of a single year the rotational momentum of the whole planet having it spin around a whole turn.

To say it in another way: it would be to have a complete Axial precession in one year (instead of the standard 25,765 years).

Axial precession is due to "flattened" Earth shape due to rotation and would be faster for planets spinning more quickly; it wouldn't be possible to have it as short as a single year because planet would disintegrate first.

Yes you can. While precession of earth's axial tilt is 26,000 years, the sun's SOI is nearly a light year in radius. Even using only the moon's component of precession it would be easily possible to place an earth-sized planet and moon far enough out to pull this off.

Of course you end up with a dark ice-ball of a world this way.

Are you willing to have a circumbinary system where the orbital period of the planet is similar to that of Saturn (30 years)? Then, observably, yes.

Kepler-413b is in a binary star system, in circumbinary orbit. The tilt of its axis changes by up to 30 degrees per 11 years. It receives between 1.7 and 3.8-times the stellar flux as we do on Earth, so it's a bit hot. If you could move it 1.4-times further out, the flux would be 0.85 - 1.9-times here, so maybe survivable substantially away from the equator. The axial tilt, orbital precession, and orbital tilt all seem to be changing in a currently unpredicted way. This may be due to additional gravitational actors in the stellar neighbourhood (planets or stars). But, if useful, allows the rapid axial precession to be

21
What would it take for an island to sink and rise yearly and naturally
16
What if an Earth-like planet had no axial tilt? (climate and technology)

6
A Binary Sun, A Hot Jupiter and a Binary Mars...All Within View of Earth
11
Earth-like planet orbiting neutron star?
0
ELEVEN Inner Planets?! What Will the Ice Ages Be Like?
1
Is it possible for a planet to orbit a binary system at the same speed as the stars themselves?
6
Could life develop in this ternary sytem?
5
How would a colliding binary affect its planetary system?
1
Can an Unstable Ternary Star System Last Several Hundred Years?
3
Could a planet form from the remnants of a star and its solar system?