What material could be used for walls on giant futuristic cities?

In the dystopic/post-apocalyptic world I'm building, civilization has been split into two different societies. One is the rich who live in very large, protected cities that have giant walls surrounding them to keep out the other society, the poor.

I haven't been able to figure out a material that would be plausible in this situation, as it would have to be strong but not top heavy and light but not fragile. Cost, time, and availability doesn't matter as it is fiction, however for the plot I am looking for a material which has a major weakness. The poor society expose said weakness in later chapters and bring the walls down in one fell swoop using something such as fire. They do not have access to extremely modern weapons or anything of the sort such as nuclear weapons.

Would it be possible, under these circumstances, to have the walls be made of an already existing material? If so, what material could be used?

Plastic bricks with an aluminum foil or tin cover, or "plastic concrete". 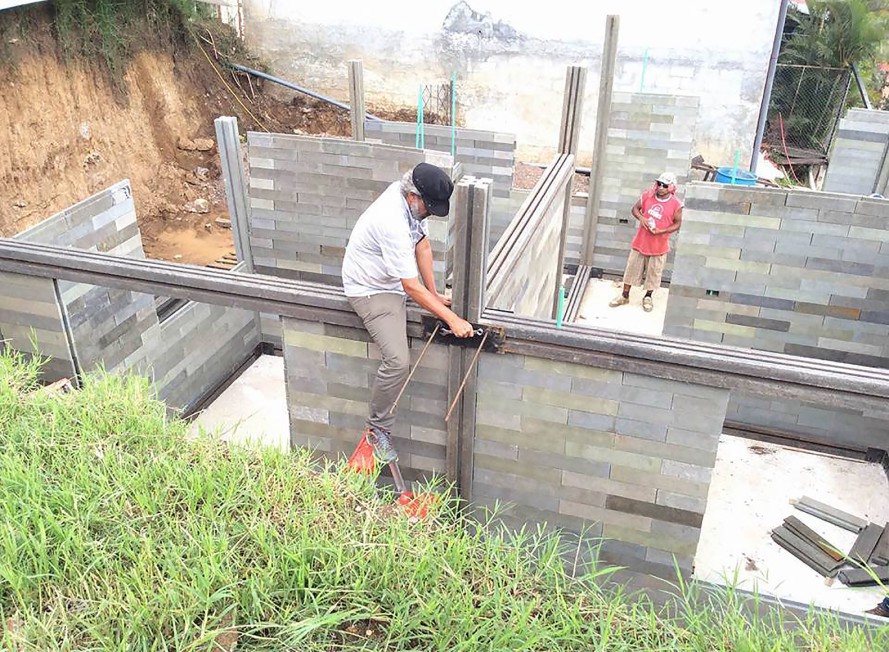 A plastic brick building in Columbia from here.

This example is small scale, but there is no good reason that bigger blocks perhaps as big as those in the pyramids or medieval castles, but much lighter to place, couldn't be used. For example, a version of this technology developed in New Zealand can be designed to use much larger, less finely polished bricks. Imagine cubic yard sized bales of plastic turned into smooth bricks.

The world is full of plastic crap that would be readily available in a post-apocalyptic world (it could be mined from landfills or gathered from floating plastic in the sea, if necessary), can often be compressed, melted and reformed into convenient shapes. This technique is used to make plastic bricks in some developed countries. Landfills are more ubiquitous than quality quarries or old growth forests which would be good in a time period when long distance transportation of low value building materials might be a problem.

Also, once placed, the plastic bricks can be welded into a single solid surface with heat. And, plastic is forever. Most kinds don't biodegrade over time. Animals don't eat it. It isn't friendly to plants that could root in it. If it's thick enough it can handle rough weather. It isn't as brittle as glass or ceramic or brick which would be good in places with earthquakes (perhaps fracking induced as people chase scare hydrocarbon supplies) or major storms.

Also, plastic is water proof which would be attractive in coastal areas put at risk of periodic storm surges in a world where sea levels had risen due to global warming.

While the bricks in the image above are bland and gray, plastic can come in many colors and random mix of pre-apocalypse marketing driven colors could provide an ugly/beautiful aesthetic that characters could muse upon adding "local color" to the story.

The (optional) aluminum or tin cover foil would prevent it from melting in the sun or from minimal stray fire exposure, but with sufficient ignition and intentionally poked holes in the metal cover it could burn.

A wall made of "plastic concrete": 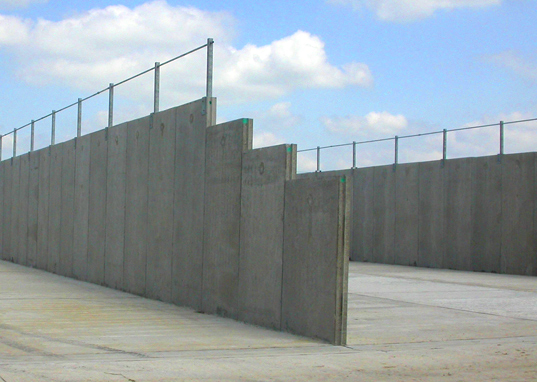 Recent RPI Masters of Architecture graduate Henry Miller has devised a way to reuse waste plastic as an aggregate in cement, circumventing the energy-intensive process of plastic recycling. By grinding up landfill-bound plastic and mixing it with portland cement, Miller was able to create a material just as strong as traditional concrete made with mined aggregate.

The trouble with plastic concrete is that the temperature at which the aggregate melts is much lower than conventional aggregates used in concrete. You'd want to have your "poor" protagonists set up fires along the base like an old stone oven or fire pit and then assault the weakened material after it had baked for a few days.

Trinitite is the glass formed by the Trinity nuclear test. The name has been applied to glass produced from any atomic event. Like all glass it is silica colored by various impurities.

The city walls could be made of this glass. For one, it would look awesome. For two, the walls could be a natural occurrence - fused crater walls from some ancient atomic event. Some structures and things from the old city might be fused into the glass.

Glass can be very strong. The walls could be smooth and impossible to climb. But glass can be shattered by sound if the resonant frequencies can be found. There is precedent for this method of bringing down city walls. 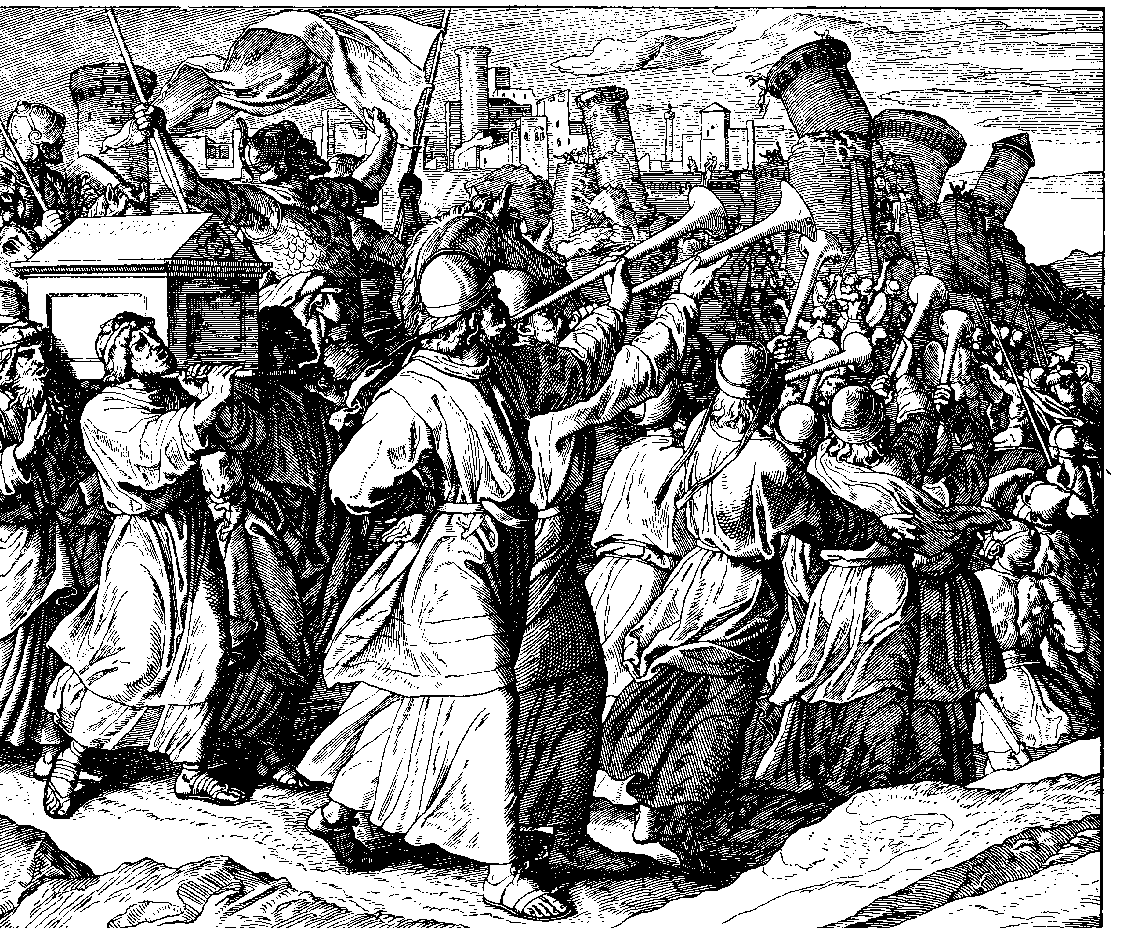 Coming to a structure near you! I am sure people have heard of reinforced concrete with rebar, but this concrete uses basalt fibers instead. It's a bit stronger (and eco-friendlier) than rebar, and makes a stronger wall.

What is the weakness? Well, basalt fibers don't do well in cement- they usually need a coating. Destruction of this coating could lead to a section of wall suddenly crumbling.

This is the carbon fiber we currently use on car hoods / bonnets. It has a high specific strength (better than steel), so a wall of equal strength would be lighter than otherwise.

It is very bad in compression, though, and all composites have a tendency to have sudden catastrophic failure. That is, this wall would be fine one minute, and then broken the next.

Maybe someone went crazy and built a diamond wall. It need not by shiny like an engagement ring, but it certainly would resist vandalism quite well! That is, unless the vandals carried hammers.

Diamonds don't do well in fatigue, so consistent, low force loads will crack and destroy it.

Not the answer you're looking for? Browse other questions tagged science-based reality-check architecture or ask your own question.

3
Diamond as a building material

8
Economic feasibility of RTGs for base power
9
How life in a neverending war zone would look like?
21
Could a futuristic world still have a medieval-like architecture?
63
What is the minimum radius of a circular corridor for the walls to appear straight?
13
How many “years without a summer” can society survive?
8
Can a giant mushroom be used as a material to build watercraft or sailing ships?
6
What could be used for orbital bombardment?
3
What would be needed to have a database that contained information on people with powers in a post-apocalypse?