So recently I was doing research on Magnetic Coil based weaponry in the Halo universe, and while reading about how the "Super Mac" worked, I noticed that the theoretical speeds at which the Tungsten Steel slugs weighing around 3,000 ton were being fired, which is about 12,000 km/s or 4% the speed of light, could be repurposed to fire spacecraft at faster speeds than many conventional forms of travel in space. Let me also clarify, I understand that within the Halo universe there are Translight space drives, but I mean this to be theorized in the present to near future, not millennia away. I would like to know the communities thoughts on this form of space travel. (Sorry if my question is confusing, I'm not a professional writer :D)

So to clarify exactly what a "Super Mac" is, it is a Magnetic Acceleration Cannon. The science behind how it works is a little more complicated than I can admit is understand, but the best way that I can describe it in my word is that it is a long metal cylinder wrapped in a coil made of magnetized metal that when given a current creates a magnetic field that when an object of the opposite magnetism is placed in the field, it suspends the object in an almost Zero Gravity environment which creates a frictionless environment opposite to how a gun works by firing a bullet through a cylinder that has friction.

What is being described in the OP and various answers is a variation of a mass driver. Since many of the salient points have been mentioned, here are a few which should be taken into account: 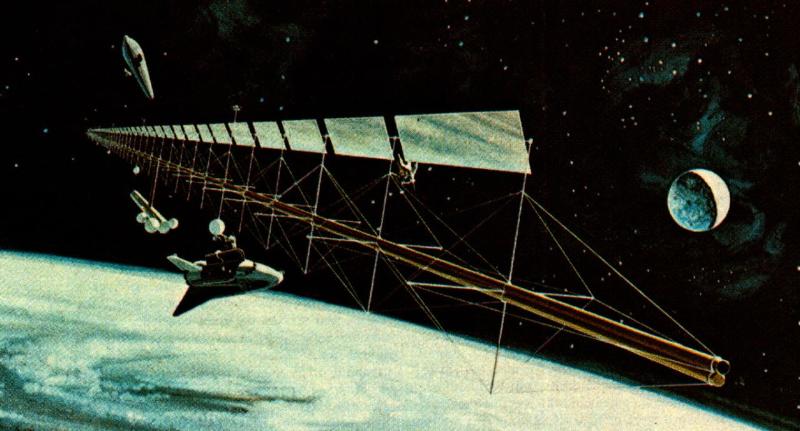 Artist's concept of a mass driver in orbit

There is no reason this should not work, assuming that the resources are available to build the infrastructure and there is enough traffic to amortize the cost of building the units. Even building the first leg will provide a large advantage to the users, you don't need any fuel to launch, so the ships's mass is reduced which means the amount of fuel needed to decelerate and then fly the return leg is correspondingly reduced. Turned the other way around, the mass driver can serve as the rocket motor for a spaceship, which means that almost anything can be the reaction mass. 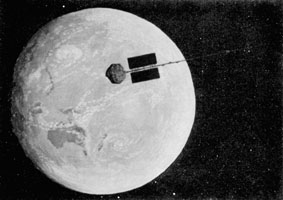 This idea is also scalable. Marshal Savage's book "The Millennial Project" had a portion near the end where he postulated some far future civilization would use mass drivers the length of the Solar System to fire manned pods to distant stars, where they could be received by corresponding mass catchers. The size of such a mass driver is staggering: 3000 AU in length, and taking a month of acceleration at 10"g" to bring the pod to .99 c. The mass catcher at the other end will be equally large, and need an equal amount of time to decelerate the pod (but can recover a large fraction of the kinetic energy while doing so).

So using mass drivers to launch or power spacecraft is quite possible, you need to be aware of the large sizes and energy requirements for launching humans out of them, however.

What you're talking about is shooting people out of a gun. The problem with this is that guns get their projectiles moving at very high speeds very quickly. Far too quickly for people to handle.

You will run into similar problems on the end of the journey. When the 3,000 ton slug collides with it's target both it and the target are going to be destroyed. Unless there is a system to slowly decelerate the projectile any occupants are going to be dead on arrival.

@sphennings is right. One gun is too much. But I want to salvage your idea BattleDoge! It can work, but you just need to ease into it.

You repeat with additional accelerator coils in sequence until you get your ship to the desired acceleration.

It's quite reasonable. You need to make it longer and weaker. See Heinlein's "The Moon is a Harsh Mistress" for some of the details.

Catching at the other end is a bit trickier. You will need some kind of larger structures to funnel them in. I can't see hitting a space capsule sized target from interplanetary distances. Midcourse adjustment thrusters?

The mass of your launch/catch systems has to be very large compared to the mass of the capsule. An airless moon works well. A hefty asteroid. E.g. Luna to Phobos

As a transport system, you need ultra reliability. If the catcher isn't operating when a capsule arrives, you end up with a capsule hitting the base of the mass launcher at umpteen km/s. Serious fender bending will result.

You don't get much by increasing acceleration. It takes 4 times the acceleration to half the length of the launcher. I'll take an hour and a half at 2 G over 20 minutes at 8 G's if I have a choice.

Not the answer you're looking for? Browse other questions tagged space-travel space-colonization faster-than-light magnetism electromagnetism or ask your own question.

49
What would be the most effective way of keeping a psychopath with a spaceship from wreaking severe havoc in a suicide crash?
7
What are dangers of long space travel?
5
Can this ship exist within our current laws of physics?
65
How to prevent superluminal traveling idiots from wrecking half of the universe?
19
Would an alien lifeform be able to achieve space travel if lacking in vision?
4
Would it be possible to build numerous spaceships that could transport 10 million people in the late 2100's?