The place of cannons and ballistae in a world without metal

I've mentioned before that I'm working on a fantasy world where most of the metals we rely on in our world are fairly uncommon outside of a single, inhospitable region of the world. The vast reserves that constitute practically all the world's metal reside in this northern realm and are being hoarded by a technologically advanced isolationist state that uses their monopoly on metal to compensate for their lack of magical aptitude. Ergo, they got to develop useful stuff like metallurgy that lets them make stuff out of steel and bronze while the rest of the world is living in stone buildings and wood huts crafted with magic.

So if every other nation in the world is forced to obtain their metal exclusively through trade with this one technocratic superpower, what does that mean for the prevalence of ballistae and crossbows over cannons and muskets in military conflicts between the other metal-deprived countries? If metal was made artificially scarce enough that most nations had to be very careful when considering the number and distribution of their metal weapons, could that mean you might see wars where cannons and ballistae are being used side-by-side simply because both armies don't have enough metal to completely phase out their wooden ballistae in favor of cannons?

To clarify, these other societies have found ways to adapt to a lack of metal by making armor and weapons out of things like dragon bone and magically crafted glass/obsidian.

On a straight technology level, torsion powered weapons can be made entirely from wood and sinew or rope. While complex devices, they were reputed to be able to hurl javelin sized bolts or large stones several hundred metres, and quite dangerous to any enemy who did not have corresponding devices to suppress incoming artillery. 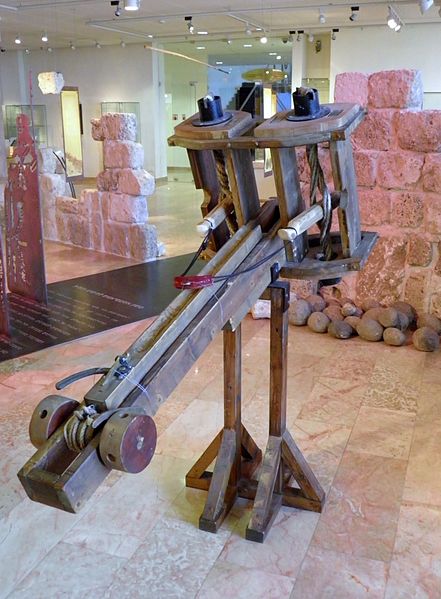 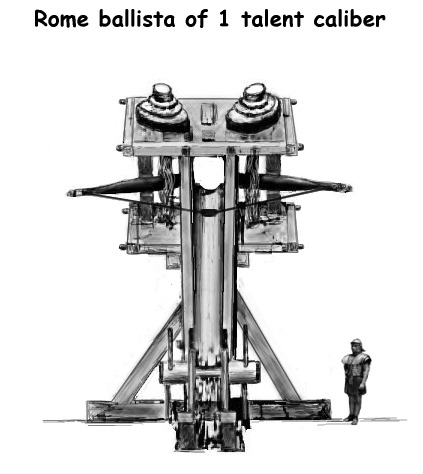 One armed versions of these torsion weapons (known as "Onagers") were simpler to construct and could throw stones, pots of burning pitch or other things in ballistic trajectories which cleared walls.

If building a torsion powered ballista is too difficult, a "counterpoise" weapon like a trebuchet can be employed instead. Trebuchets can also be made exclusively from wood and stone or soil (to fill the counterweight box), and can be scaled enormously. Weapons like the "War Wolf" could hurl huge stones with enough force to break down curtain walls of medieval castles, and modern reproductions using telephone pole sized throwing arms have been used to throw small cars. 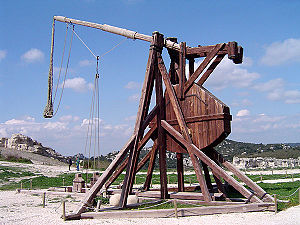 In addition to the traditional trebuchets (which were actually quite sophisticated), modern trebuchets used for such things as "pumpkin chucking" have been designed to enhance the power through use of moving pivot points or attaching the counterweight to a rope describing a spiral path. Without gunpowder to supplement and replace these engines, it seems clear that there would be prolonged quests to increase the power and efficiency of war engines: 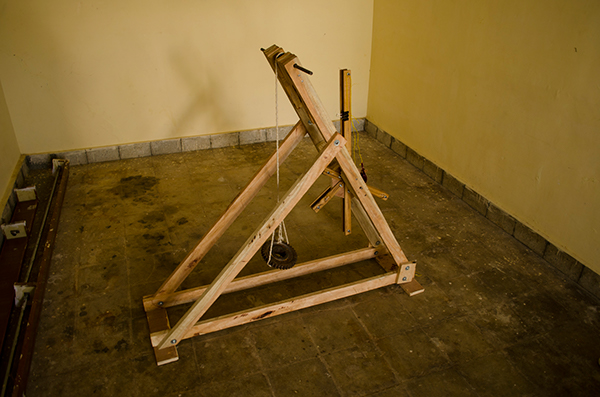 Murlin trebuchet. The rope passing over the five projections on the throwing arm provide a progressive increase in power transfer from the counterweight.

So the short answer is it is entirely possible to build very powerful war engines without the use of metal at all.

You could mimic the armor and weapons that the Incas and Greeks used during their time.

Depends in how much scarcity are we refering too, for example:

Utility of the magic in your world

I wouldn't need a cannon if I can manage to gather a few wizards and cast a huge fireball towards my enemies. Same with armor, since you could bend stone and wood to make a building, doing the same for armor and weapons looks easier than buying metal armor from those wierd magicless dudes.

Even buying the the metal bars would be more practical, since you could end up bending the metal with magic at points that metal workers couldn't even dream.

In an army that uses magic as a primary offense technological weapons are kind of misplaced but to answer the question about mismatched equipment, generally speaking you use what you can get to the battlefield, you can't afford to retire wooden weapons so you don't, you bring a mixed bag of whatever you can get ammunition and crews for. Probably you prioritise the newer more powerful weapons though. You certainly prioritise the use of your scarce metal resources towards maximum damage for minimal inputs.

Cannons are probably out. While you can make them out of wood, they tend to blow up pretty spectacularly (wood splinter shrapnel). They also made cannons or, more technically accurate, mortars by digging pits in stone (very limited field of fire). So, you are restricted to trebuchets or catapults.

Those heavy weapons are only really useful if they far outrange the ability to throw magic or are used in areas that lack magic for some reason (genetics, lack of free magical energy, blackish green rocks that suppress magic, etc.). Otherwise, one mage that gets close enough will ruin all of your hard work.

Not the answer you're looking for? Browse other questions tagged magic military-defense .

16
Warfare without Metal
54
How do I defend an island nation from attackers with 15th century technology?
12
Why did the "Orks" never develop better firearms than Firelances and Handcannons?
4
Internment camp for magical beings
6
Cannonless ship of the line - could I have ship of line with magic catapults/balistae?