What is the minimum distance needed between physically distinct races?

If there are several races with very distinct appearances (e.g. Nordic-pale vs. Arabic-tan skin, red vs. black hair, etc.), how much space / natural barriers do I need between their homelands to justify these distinctions?

Also, some of the races may have cultural taboos against interbreeding, but most do not.

(In this case, there is a desert in the center of the known world, with several oasis cities scattered in it, and other cultures are more or less evenly spaced around it.)

The answer isn't simple because you need more than physical distance and barriers to accomplish variation. It requires said distances and barriers to hold over long periods of time and allow for long periods of little contact as well. A good rule of thumb would be to take real distances as a starting template and then work through your constructed history to arrive at mixtures or backwards from a set of differences you want to achieve.

That said, we should be able to work backwards through our own history and at least get some numbers to work with. 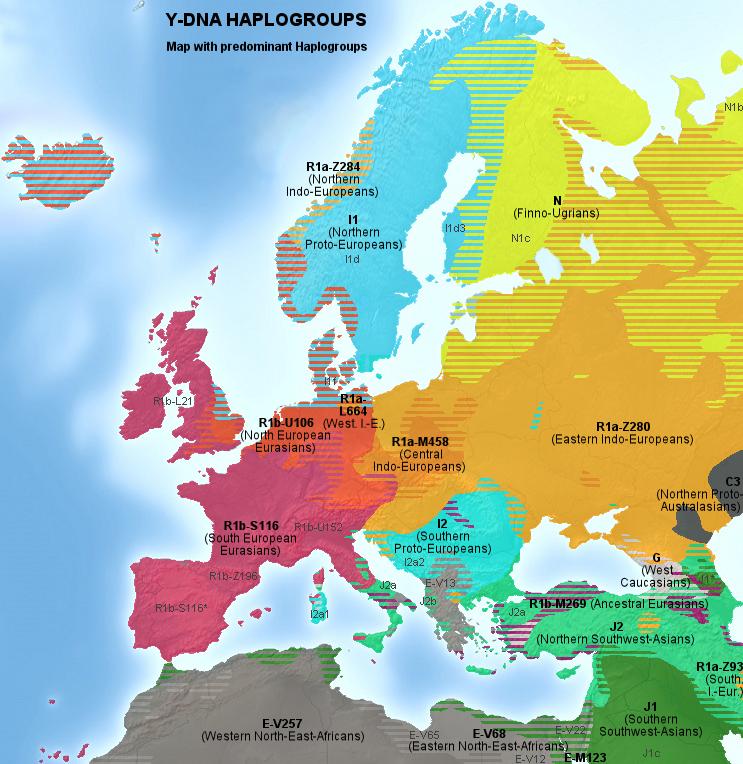 That's a map taken from Wikipedia showing the distribution of Y-DNA haplogroups in European populations. Now, I don't really know what a haplogroup is, but as you can see, there is a clear racial and phenotypical distinction there. edit - Wesley Obenshein explains this more in the comments

Here's a link to a world map of the same: big picture

The issue here is, there doesn't seem to be a timelined map giving us how these distributions have changed over a few millenia (which is the smallest time scale necessary to make any conclusions - and that's still very generous).

What we do know is that even with relatively low tabooing of interbreeding, as has applied to our world for a few centuries and less as populations have grown, we still have pretty distinct racial appearances. You can still tell people apart and assume a genetic ancestry even when the differences are subtle. This means we can assume that barriers and distances don't need to be that large to maintain differences. How convenient :P

The question on minimum distance remains. Is there really a minimum distance however? Depending on whether you've got non-human races in there, many factors could contribute. According to this forum post for instance, sunshine is a determining factor in the levels of skin pigment. If the desert is in the middle and the world rotates around its star like ours does, it wouldn't matter if you're in the desert or not, but if you're around the equator or not, to get darker skin. That doesn't have to do with distance. Many such factors can be included, but this is overt enough to be easy to use.

So the minimum distance probably has to do more with population concentration and how much these populations operate as a whole or separately. A good way to work up to distances would be to distribute the land according to the success of each civilization. If they're more successful, give them more space and have all those inside that space be of the same race. Larger spaces will have higher tendency to include variations and individuals or communities from other races.

The last distribution implies that the minimum distance would depend on the total available space. But obviously, if there's too little space there might be little to no variation at all. If there's too little climate variation, there's less racial variation as well. So now the question becomes, how large can communities grow? Obviously this has a relation to technological level and resources/food.

Wikipedia gives us some numbers: http://en.wikipedia.org/wiki/Historical_urban_community_sizes

They range from a few thousand in Neolithic times to 50-100 thousand in the Iron Age. We could take population densities and the size of countries at those times as a reference, but those depend much more heavily on how much space and resources are available while the settlement sizes are a better indication of how many people are willing and capable of living together in stable populations. Lets take the areas covered by those settlements though, as it would be an indication of how close together people are willing to live.

Wikipedia states that one of the largest Neolithic settlements spanned 15 hectares, which is .15 square kilometers. That's a square about 400 meters on each side, which is not much. To compare, Babylon was about 9 square kilometers in size and had at one time up to 200 thousand people in it.

To get what you want, work backwards from these.

If by this time you get a lot of overlap or a very low population size, especially if it's low compared to technological level, you have too little space. But at least you can work backwards from how large your world is and how many different habitats are available (don't forget planetary tilt and rotation) using some real numbers to help.

This answer doesn't handle how to separate the population, but discusses how much separation is required.

I decided to do a small simulation of two such populations to give you an idea of the amount of interbreeding that is possible to retain the two populations. I assumed there were two populations, both of which were city sized (they mixed together within their city perfectly, everyone may end up having children with anyone else). Then I assumed that a small percentage (alpha) from city A moved to city B each generation, and the same percentage of B moved to A. Then each generation produced a new generation with the ethnicity distribution that the new generation which had an ethnicity ratio was proportional to the number of individual pairs that could lead to them.

For example, assume cross-over was 1 percent and we are simulating the first generation. The original generation from city A has 1% individuals that are purely from B, and 99% that are purely from A. Therefore generation 2 would have 0.01% from B, 0.99% that are 50/50, and 99% that are from A. Then 1% of this distribution would swap with 1% of the opposite from the group at B and it would be repeated. I ran this for 1000 generations, with 1025 different ratios available (i.e. a person could be 1/1025 from A and 1024/1025 from B). Here are the results (I apologize for the small font):

The top left is when there is no mixing. You can't see anything because the populations stay pure.

At >3% cross over though, the populations become unstable and converge to both being about 50/50 for all individuals. Therefore while you may have many ways to seperate the populations, you want to make certain that the population transfer per generation is only on the order of a percent or two.

Any barrier that prevents mixed families in significant enough degree (need not be absolute) would suffice. For a lower level of technology, a chain of high mountains, an ocean and other similar obstacles would work.

Race separation may also happen without geographical isolation, if mixing is prevented by other reasons like social barriers.

Divergence into different races should be much faster if there is an evolutional pressure for the different appearance. Dark skin protects from sun efficiently, but if there is not enough sun, white skin allows to synthesize enough vitamin D. With sun creme and vitamins both available in the shop, does not actually matter in these days.

Not the answer you're looking for? Browse other questions tagged geography demographics genetics races or ask your own question.

8
What is the difference of population density between the population of a nomadic and a sendentary territory?
6
I want a big city in the desert, what conditions make it possible?
13
The shortest possible distance between a boreal area and a hot desert?
7
What would the social implications of the creation of humanoid races be?
8
How much genetic variation between a human and an alien would allow the human and alien to have, even infertile, offspring?
11
Effects on the Earth if the moon was at 1/10th current distance?
2
What Would Be Needed To Produce Human Hermaphrodites?
4
distance between climate/geographical changes