Could a Tidally Locked Moon Ever be “Unlocked” via Artificial Means?

The motivation as to why one would want to give a tidal locked moon a spin is out of the scope of this question. I only want to focus on the feasibility. Suffice to say there could be a few hypothetical reasons such as a night/day cycle for prospective inhabitants.

If there is a moon that is tidally locked, could humans with present or near-future technology create spin on that moon such that the mass of the planet it orbits and the distance the moon is to the planet remain unchanged. That is to say, the only variable we can change is the equipment/technology on the moon to generate spin.

There are two contradictory conditions. With current and near future technology, spinning up a moon within 100 years simply isn't possible. We cannot command enough energy to bring in enough asteroids or comets to either strike the body and impart momentum, or arrange flypasts in an attempt to use gravitational torque to spin the body.

To so so in under 100 years requires massive amounts of energy, which can be provided by far future technology. Researcher Paul Birch wrote several papers on "How to spin a planet" (including changing the orbits) using a stream of ultra high speed pellets to impart momentum. these were powered by "light sail windmills" near the Sun, and using a small percentage of the Sun's total luminosity allowed the system to spin up Venus and move it to a different orbit in a period of decades. 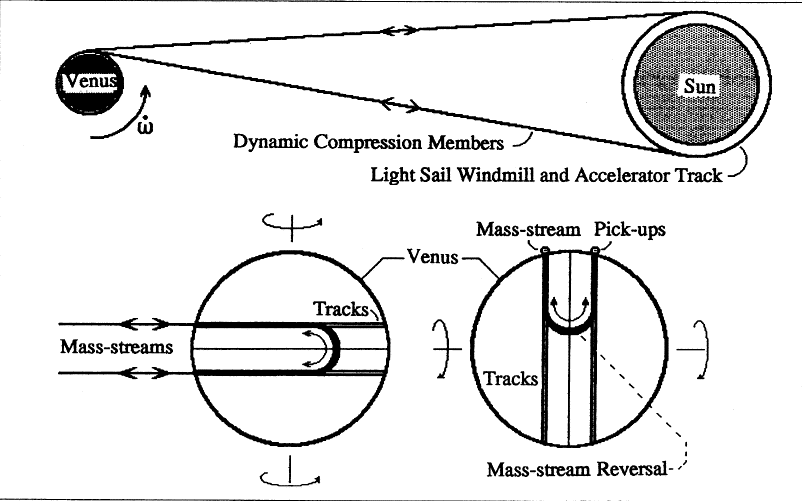 Scematic of how to spin a planet

The major difficulty in using this system to spin a tidally locked moon like the Galilean moons of Jupiter is the stream of pellets will be carrying an ungodly amount of momentum and kinetic energy, and cannot ever intersect the path of any planets, moons, asteroids, spacecraft etc. between the windmills around the Sun and the target. As you get farther away from the sun, this obviously becomes much more difficult, and will require a massive amount of computational power to work out how to launch the stream and take into account intervening bodies, gravitational deflection, transit time and the effects of an irregular series of "pushes" to spin the moon.

So if you are willing to wait a century or two for technology and the space infrastructure to mature enough to build these devices, then it will be quite possible to spin or move moons and planets around to your heart's content.

The only thing I can think of, for large moons, is asteroid bombing on a very low, almost tangential orbit.

That would change mass of the satellite, possibly in a noticeable way.

That would surely produce seismic activity, but that could be concentrated in areas far from settlements (if any) and reduced using many smaller impacts.

Not the answer you're looking for? Browse other questions tagged science-based technology space or ask your own question.

46
Can a planet be tidally unlocked?

11
A world with a moon orbiting much closer than ours
9
How to protect human colonists from Red Dwarf flares?
9
How would this tidally locked planet be affected by its moon and would the moon have a deaccelerated orbit?
10
How Effective Could we Expect a Subliminal Programming Facility to Brainwash People be in the Near-future?
6
Plausible way to send a moon crashing into the planet it's orbiting?
7
Could Non-Baryonic Matter Ever Support Computer Architecture?
1
Can a Planet's Magnetosphere be Strengthened Artificially?