The Angelic Host is going to war. It's a long journey, requiring flight over the highest mountain ranges and long trudges through the fiercest blizzards.

As with all large scale military marches the Host will be carrying equipment, tents and provisions for the journey and the eventual battle, averaging 30kg of gear per angel. Each angel is the same physically as a well built human, but with a pair of large birdlike wings based just behind the shoulder blades that enable them to fly by pushing off Plot particles floating in the aether (you can assume these wings are strong enough to deal with the extra weight).

Naturally hands need to be kept free for wielding flaming swords and throwing thunderous spears and playing mighty trumpets etc, so how might an angel keep all their equipment about themselves without interfering with their wings (or ruining their backs)?

EDIT FOR CLARITY: I don't care about the equipment in the knapsack, I care about the manner of attachment/storage. The question can be most succinctly written as: 'How could my winged humanoids attach items/goods to their bodies in such a manner that they can keep their hands free, fly and walk'.

A military host needs food, clothes, first aid and a whole lot more to be combat effective once it is time to get bloody. No military host moves faster or farther than their logistics, the so called Train.

So unless your host's train is flying and carrying everything with them in the air, this means that your host has a sizable portion on the ground, carried by land vehicles of some sort, trucks or wagons or whatnot. This in turn means that your angels do not need to be carrying anything in the air for the most part. Their knapsacks will ride as cargo on the ground.

If some smaller groups go off as a detachment however (think rangers or some other units that operate independently from a host), then the question becomes relevant, and a matter of rather simple aerodynamics.

For anything carried on their person, they want that to be carried low (i.e. below them when flying) and conformal against their body to reduce drag. So their packs would be large, flat chest packs most likely.

However if they are the least bit clever they would not carry it on their person, because for an avian creature lifting is a very heavy affair. Instead they would probably bring some sort of cargo glider with them — like a hang glider or paraglider — stuff their knapsacks under that, and tug it behind them. This is because the energy you need to spend to make a given mass glide is a lot less than if you need to provide direct lift to that same mass.

The angels are strong enough to fly while carrying their body weight plus 30 kg. That's a lot of extra strength, so I don't think you need to worry about their backs.

And a question you didn't raise: How are you feeding this army? Each soldier probably needs about a kg of food per day, maybe more (basing this off of the diets of British navy sailors, since there's reliable data on what they ate). So if your armor, weapons and shelter take half the pack, you've got about 15 days provisions max. A large human army would travel with a supply of food and extra supplies hauled by beasts of burden, or a small force might try to rely on raiding farms and towns as they pass.

Think of a basic military harness - the kind with a single back strap and two in the front. The cargo would be split between a few waist packs, a bigger front bag (aka baby carrier) and maybe a fanny pack. Down low. A pair of thigh packs might work as well. Assume the front and fanny pack would not be worn in combat.

The solution that immediately comes to mind is a hotshot (wildfire firefighter) style backpack. It's basically a standard rucksack, but the pack is slung a little lower and supported by a center piece that runs down the center of the back (between the wings in this case). 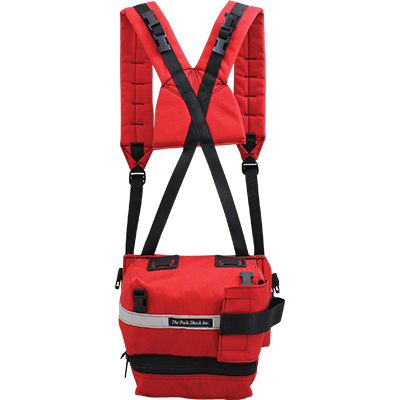 or a larger pack, center strap can be adjusted 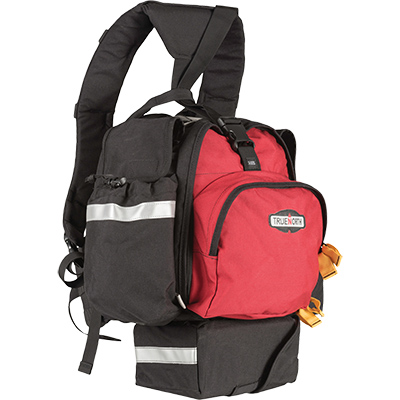 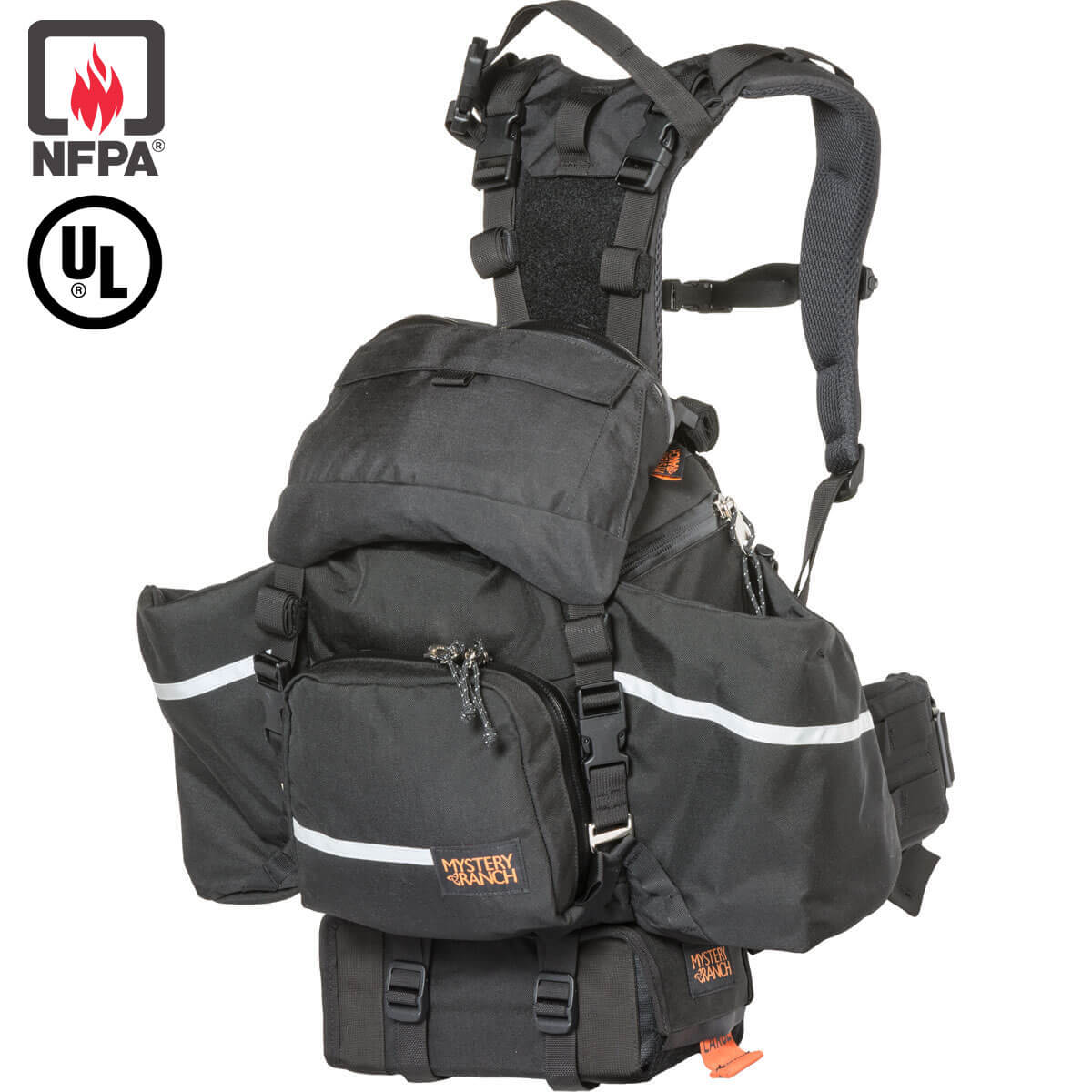 You want it to not interfere with the wings, so dead in the middle of the back is pretty well out.

You also want the weight of the pack to be settled on the shoulders while upright. I mean, that's what a backpack does.

Take a military harness as a start point. One central, dorsal strap and two shoulder straps. These are connected at the waist by a complete belt that goes all the way around the abdomen and over the hips. The actual pack is attached to the belt and central dorsal strap. It should hang over the but, maybe as far down as the middle of the thigh. you may want to consider bifurcation at the butt and thigh straps to keep the load as firmly attached to the body as possible. You can hang all kinds of weapon and gear attachment points to the harness.

The point of a backpack is to carry gear in a way that you can still move and manipulate things with your hands. It tends to be easier if the pack moves with you rather than some semi independent mass. This would be even more important in flight. That is why you need to strap it to just about every point away from a joint as possible. you bend at he waist and it's an independent bend for each leg, so you have thigh straps. The belt is situated above the waist. the trunk doesn't move a great deal, comparatively speaking.

A note after re-reading the question and some answers.The position of the load on the body is important for flight, it it also important for fighting. I flight, the load being directly under where the wings join to provide balance makes the most sense for just flight. By contrast, having a bulky object between your arms is impractical for combat.

You might split the difference by making the whole thing modular. Anchor the mass in front for long flights up the mountain pass, when enemy action is near, shift it around back. Make sure you train to fight and fly in both scenarios, just to be prepared.

I hope I described it well enough. Not a great artist, but I can see it in my head.

Are there any (flying) pack animals that the angels could use? Thinking in terms of infantry/cavalry - if you've got flying horses that can match pace with the angels, they could also be useful beasts of burden? Potentially a land train could go on as well, but if aerial travel is a necessity, then maybe some extra wingpower could come in handy.

Also, are there military ranks within the angelic host? If you've got a section of lowly footsoldiers (wingsoldiers?), perhaps part of their duty would be to carry some of the extra weight (superfluous weaponry, culinary equipment, camping gear, etc.). Then the higher-ranking or more experienced angels would have greater freedom to fly without being overencumbered.

Scouts and rangers would probably want to pack light as well, given that their job is to travel greater distances and keep the rest informed of what's happening ahead - so someone else may have to take care of the heavy possessions they need.

Not the answer you're looking for? Browse other questions tagged mythical-creatures anatomy clothing or ask your own question.

-3
What is in an Angel's knapsack?