How to get down Valles Marineris

In my World, a perfect storm of catastrophic size strikes earth and black-death levels of mortality ensue, cutting short the Great Space Race. The only problem is that there are over 10,000 people stuck on Mars, but with mortality in the billions, Earth nations (or whatever is left of them) can hardly concern themselves with a few thousand wayward souls.

Fortunately for the far-flung Martian colonies, a man by the name of Diego OfeAde unifies them with the generous support of ClF3, and is named Arbiter of Mars.

Now with the Martians only lacking a common residence, Diego decides that the future of Human Mars is at the Bottom of Valles Marineris. It has a few benefits; thicker atmosphere, aquifers, warmth during the day and night, protection from sand storms, etc. There is one little problem: a four-mile deep cliff between them and the valley floor.

Diego, however, has good faith in his friend Guoliang Guan to get their 250,000 tons of material down the chasm with their circa 2100~ technology and the industrial capacity of Atlanta.

How can the martians achieve the Herculean task of moving all quarter-of-a-million tons of (presumably fragile) material safely to the bottom of Valles Marineris?

Cut a road into the canyon walls.

In order to build stuff on Mars, they are going to need a lot of heavy earth moving equipment. Simply start digging/mining along the edge of the canyon, and make a very long ramp that the equipment can be hauled down. Then it's just a matter of driving down.

Marian soil is called regolith. It's basically a lot of rock, broken stones, and super fine dust, some of which is as small as 0.15 microns.
As others have noted the walls of the canyon are somewhat weathered, and a lot of the length would be considered very steep, versus sheer.

In other places you'll find basalt and other volcanic rock.

Valles Marineris is believed to be a tectonic fault where two plates separated while the planet was still cooling. If this is correct, then the bedrock would be very hard, but there is likely to be a lot of regolith piled up where the bedrock has weathered.

There may be places along the canyon where you could get away with a switchback road bulldozed through the surface. Other places may need to have the road cut into the rock more.

In regards to the regolith, you'd want a bulldozer or other large equipment to push boulders out of the way, and smooth/level the ground for the road.
You also would want something like a steamroller to compress the soil and keep it from crumbling away under the heavy loads.
You wouldn't want to go strait down hill with several ton load if the grade is too steep, and switchbacks might not be practical in all areas because the lower road can undercut the stability of the upper road, which would be bad, especially if the soil is loose.
Also, you wouldn't want a gradient of much more than 20%.
Gradient is calculated by dividing the vertical rise by the length of the run.
Working backward we get 20% = 7km(4mi) / 35km(21mi). So that means we need a road that is at least 35km long, which can either run parallel to the rim or switch back as the terrain allows.

Drive up from the northern end of the valley, where there isn't a drop off; shown in the topographical map below: 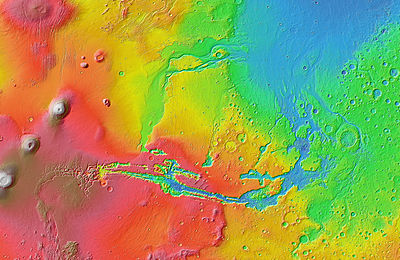 Depending on where you start from this could be relatively easy or may involve constructing a ~4000 km road (the length of the valley). Assuming they have the infrastructure in place to travel long distance across the surface they could use existing land transports.

Just drive down it. Although the valley is large, it's not terribly steep. And like all valleys, some places are steeper than others.

Here's a cross-section from https://productforums.google.com/forum/#!topic/gec-mars/9kR0zzUGuRc:

Note the vertical scale is exaggerated 4 times, making the actual cross section more like this:

Moreover, as with any steep terrain, there are local features that are not as steep. Here's one approach that gets you into the valley without going down any of the steep slopes: 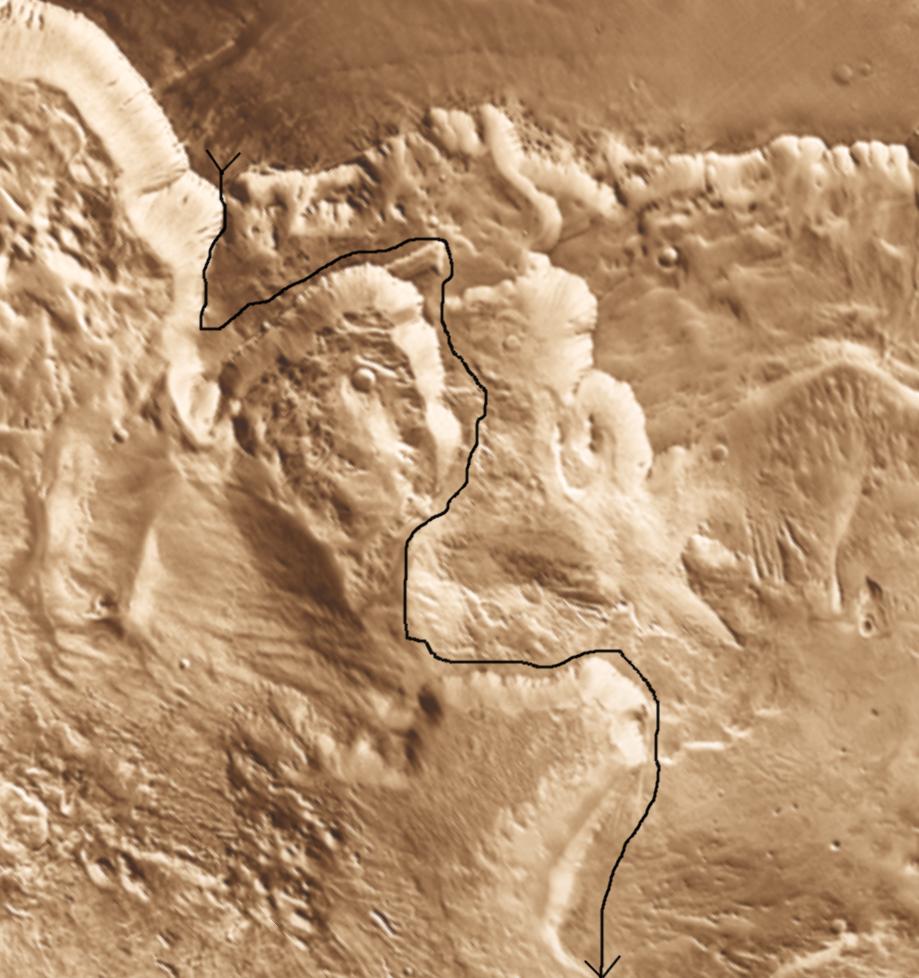 This is taken from a section near the middle: 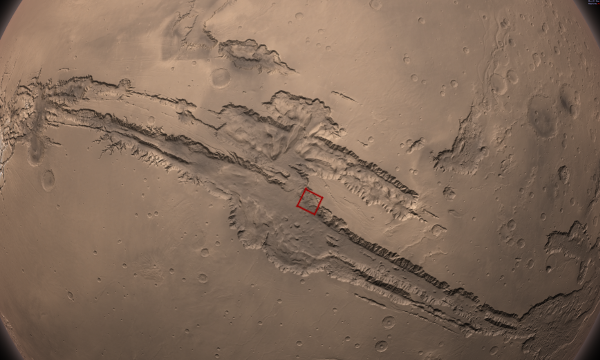 With a detailed topographical map, some reconnaissance, planning, and care, getting to the bottom of the valley shouldn't be especially difficult. This is just one example. People do this sort of thing all the time on Earth, on much steeper terrain. The Grand Canyon is steeper but it's not difficult to drive down it.

We can assume since there are no roads on Mars, if the colony is mobile at all it has decent off-road capability. Even taking no effort to avoid the steep parts, and going straight down the canyon walls, the grade is only about 25%. While this would be a challenge to a typical Earth semi-trailer (Veil pass on I-70 is 6% grade), potential Mars vehicles would necessarily be more rugged.

The awe of Valles Marineris isn't the steepness: it's just the huge size of it. It's about as long as the United States are wide, and it's about as deep as Mt. Everest is tall.

Although, this does raise questions of why the valley would be any better. Indeed the atmosphere is thicker, but it's still very thin. According to this Mars atmospheric model by NASA, the pressure at altitudes below 7 km are

The valley is too wide to provide appreciable protection from wind storms. And wind storms on Mars are not all that bad. Peak winds are around 60 mph, while Earth storms can double that. And the atmosphere on Mars is so thin, the force imparted by a 60 mph wind is very much less. The problem with dust storms is really the deposition of dust on solar panels, but we can assume a colony has solved this problem with something as simple as a feather duster.

I can't find anything to indicate aquifers are more likely to be found in Valles Marineris. It's not known how the valley was formed, with erosion by water being only one possible explanation. And regardless, that there was water there in the past does not mean it's there now.

It is the case that only at the lowest elevations on Mars can liquid water exist (it would sublimate into vapor at higher altitudes due to the lower pressure), but if you just wanted to get to a lower elevation there are more easily reached places than Valles Marineris, such as Vastitas Borealis. Or you could aim for Hellas Planitia, which has lower elevations. While you're there, you can visit the crash site of the Mars 2 lander, the first man-made object on Mars.

If you're able to make use of subsurface water, they may be all over the planet. In fact if a colony were on Mars in the first place, it would probably already be situated over such an aquifer, with missions between now and 2100 having already surveyed the aquifers. 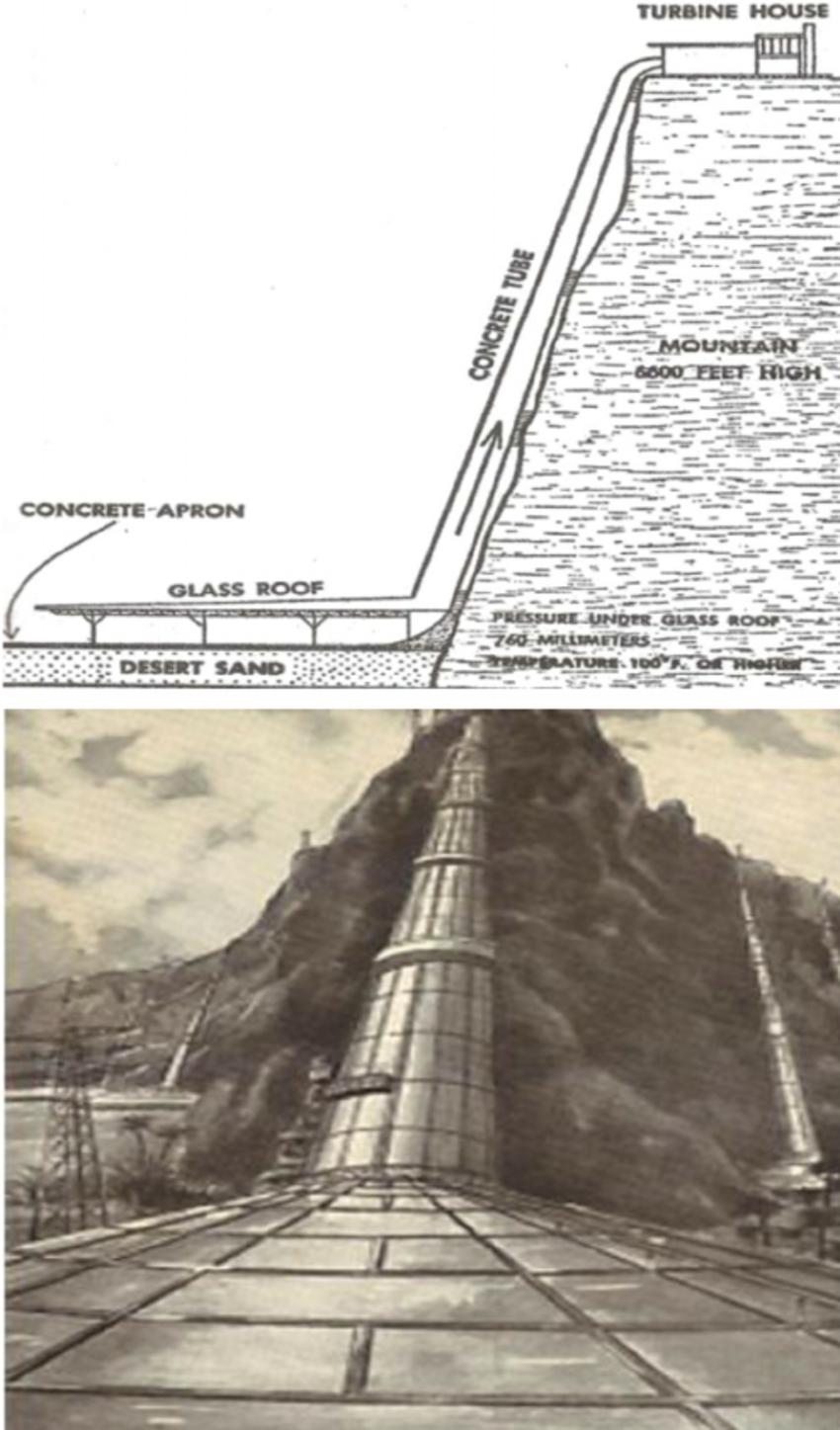 In 1926 Prof Engineer Bernard Dubos proposed to the FrenchAcademy of Sciences the construction of a SCPP to be located inNorth Africa with its solar chimney on the slope of a sufﬁciently high mountain as shown in Fig. 5 [53,,54]. from https://www.researchgate.net/publication/290788607_Historic_and_recent_progress_in_solar_chimney_power_plant_enhancing_technologies

I think that sweet painting looks exactly like the Martian version would.

Not sure exactly why everyone would have to leave their already perfectly good and functional shelters to live in the Valles Marineris (if 10,000 people are already living on Mars, they are not living in the equivalents of tents or temporary shelters), but since the objective is to move a lot of people and equipment a long distance (both vertically and horizontally), then the most sensible thing to do is move them by air.

Using airships sized for the Martian atmosphere (Martian atmosphere is roughly equivalent to the atmosphere on Earth at an altitude of @30km) provides a relatively quick way of reaching scattered settlements, picking up passengers or cargo, sling loading outsized loads and then simply flying directly to the new site and descending. The huge time and expense of building roads or tracks is eliminated, and transit time is reduced, limiting the time spent in the Martian environment.

To give you an idea of the scale and scope of this airships, here is the statistics of a propose scientific "superpressure" balloon for a scientific expedition to Mars:

The 1997 JPL Mars Geoscience AeroBot project, was aiming to launch a superpressure balloon on Mars. 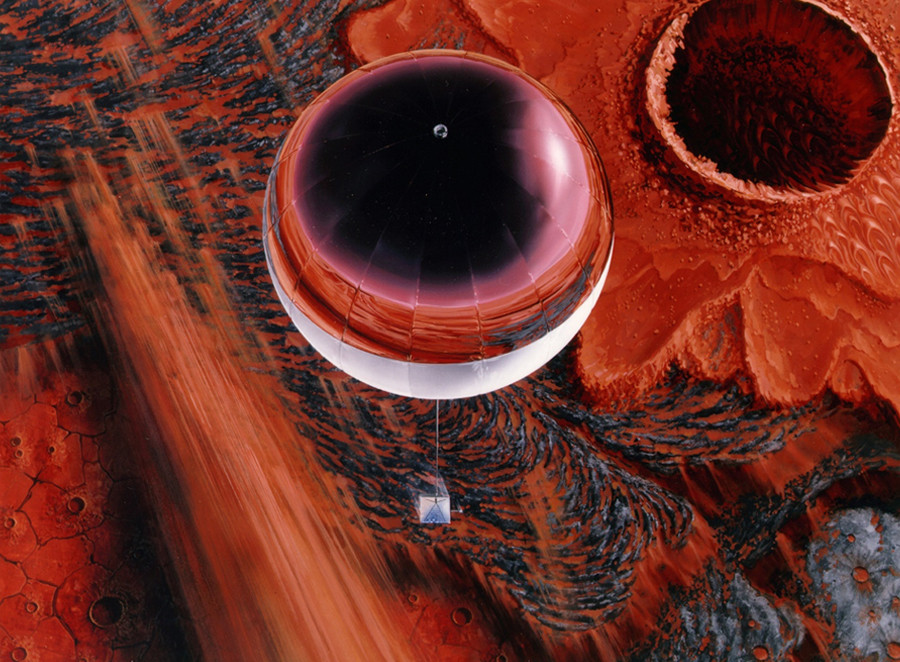 Another comparison might be to look at the Hindenburg airship on Mars:

The Hindenburg had a lifting volume of 200 000 m3 of hydrogen, which ideally would lift 237 tonnes at STP, and a structural mass of 118 tonnes. The atmospheric density on Mars is about 20 g/m3 (maximum I guess) and the density of hydrogen at 1 kPa and somewhat arbitrarily chosen 240 K is about 1 g/m3, giving 19 g/m3 of lift for a grand total of 3.8 tonnes.

So the airships will be huge compared to Earthly ones, but the advantages of using airlift are fairly obvious. As well, once the evacuation has finished, the airships can be useful in prospecting across the planet, going to the Martian poles to mine for water and frozen CO2 or retrieving items left behind in the initial evacuation (or heading back to the previous shelters, if people choose not to live in the Valles Mariners).

If you are looking for funny and strange-looking answers you could come up wit really funny stuff.

Everything (as always) strongly depends on what is available, but:

Nobody has mentioned the gondola lift yet (the bonus of being alliterative with Guoliang Guan).

Realistically, though, mass migrations don't happen because one person decides - they happen because of crisis. I have a hard time imagining crisis conditions outside the valley that weren't there when the settlers first emigrated.

I have a much easier time imagining an economic migration - because the temperatures and pressures outside the domes are greater in the valley (or the access to more layers of sedimentary deposit, or whatever), production rates in the valley far outstrip those above, and there are jobs that pay much higher than those on the upper surface. Such a migration would happen more slowly, and it's likely that outer settlements would continue to struggle along (much as rural America keeps on even though their economic output is dwarfed by that of America's cities).

A forced migration is also more believable, but Diego OfeAde would be more of a warlord in this case (Is that why you mentioned CIF3 - because of it's properties as a weapon rather than as rocket fuel?). Forced migration would quickly empty the upper surface of its inhabitants, and could ostensibly make Mars "more governable". It would, however, upset everybody who didn't really want to leave their homes and could cause a rebellion.

A forced migration for the purposes of military defense could be more popular, but it sounds like there are no enemies...

7
How can I get soil for my Martians?
4
How to maintain artificial gravity in an upside-down city
3
How to fly around the Martian thin layer of sky without burning holes in our pockets?
1
Designing a Mars-Class Zeppelin
4
Sandalphon: A Machine that Copied Gametes
21
How would a Mars colony living in a giant dome protect against rapid decompression?
1
how to get around a centrifugal force gravity ship
5
How viable would it be to dig down on Mars to build an underground colony?