How would forex works between medieval humans and the forest elves?

Forest elves (being a subgroup of elf species) spend most of their lives in the woods, where they welcome human visitors and don't hesitate to prosecute anyone violating the peace there.

They embrace non polluting technologies and they have the unique ability to manipulate trees and plants to a certain extent that cannot be replicated even by modern science.

I'm working what kinds of currency can human use to trade with them in the medieval times and how can they tell if the price is unjustly inflated?

This really goes without saying since the period doesn't yet have fiat currencies, it's either silver or gold. Gold is basically useless in this period apart from decoration or currency, and perhaps elves have different taste in decoration. Maybe the elves value good steel above gold because it's hard to get without destructive industry, just as Aluminium was once highly valued.

However you approach this problem, to have two way trade you have to find something that both parties value. If you don't want two way trade then the glass beads used to trade with some primitive tribes could be the way to go. Decorative and rare to the tribes in question, but largely worthless to the explorers.

In terms of price, it isn't unjustly inflated. Either it's a price you're willing to pay or it isn't. That's true of any product from any vendor. If you're not willing to pay that price, walk away.

Consider the iPhone. It's well known that it retails at around 900% of cost yet people still pay it. Why? They consider it to be a price worth paying for that product.

"Unjust" inflation of prices can only apply to products essential to survival, e.g. food, water, etc.

For actual forex you need a middle man, someone who has a personal understanding of the value of the currencies.

Given that direct trade between ordinary people of either faction is unlikely as normal people don't move around, trade will primarily be through merchants whose livelihood is based on dealings with both, and who will have stores of both currencies. The rate you're going to get is more likely based on how valuable they are to him, not any absolute factor or practical value in the field. You'll probably get ripped off. Better to stick to shiny beads you can sell directly.

Something that perhaps should be specified: values and morals?

Take, for instance, the Silvan Elves of Mirkwood Forest in JRR Tolkien's Middle Earth. Though there is much animosity between dwarves and elves, Men sort of acted as the middlemen for trade. To the elves, whom had immortality, food, land, a kingdom to protect and were safe, there wasn't much else they desired aside from Wealth and Drink.

Elves very much enjoyed the ores that the dwarves had mined, as did men, and none were immune to the greed that things like gold and other rarities provoked. Elves were fine craftsmen, creating elegant pieces of art, weapons, and furniture from what was traded. Therefore, while elves may not necessarily have monetary value for gold, they may still desire it for artistic, magical, or other needs.

Additionally, the Men of Lake-Town perfected the art of brewing to a degree that these wood elves coveted, which is a feat to bring out the reclusive kingdom.

Elves are lovers of wine. As stated, the Elves of Mirkwood get all of their wine from the lake city of Lake-town, and there is never a decrease in demand for it. Likewise, all other Elves of Middle-earth are not easily parted from their various types of local wine. Travelers that come upon their feasts will see that after the wine has been passed around for a while, a dramatic change in the general merry making occurs. When offered other types of alcoholic beverages, such as beer, Elves are not known to decline, for they seem to accept all forms of alcohol. It is even said that an Elf could best a Dwarf in a drinking contest, regardless of the type of drink.

So I'd say this question more comes down to what your wood-elves value.

I would like to point out that it is much more interesting to give any being the depth of weaknesses, as having something as two-dimensional as doesn't like pollutants and are self-sustaining gives you effectively nothing. They would be either be reclusive and value nothing from the outside world, or would desire to conquer it to achieve endless growth in nature. You may want to flesh out the activities they generally enjoy, innate skills, mental acuity, so on and so forth, before asking what they would want in trade, as those plainly lay out and describe what your wood elves would desire in trade, whether they don't like to produce something because of pollutants, but are fine with trading for it, or they don't have the resources available.

Trade starts with barter. You exchange goods against goods. Some of the goods that are valuable to elves will become the currency of humans and the opposite is also true. Good currencies have some properties: they do not lose value to elves with time. Pigs were a currency in some societies before. But pigs die, you need to feed them, and you need to see if noone steals your pigs, so they were an inconvenient currency. Gold is actually heavier than modern currencies and also easy to steal.

Concerning the fair price. Every person has an internal value till that he is willing to pay or sell (mainstream theory in microeconomics). The trade occurs if two people meet with different internal values. The price can be anything between the two points and depends on the bargaining power of both sides (Game Theory). When the number of buyers and the number of sellers is big, they are on the same market, and they have different internal values than there is an equilibrium price, but this is not the case of individual traders. The bargaining power of buyers is less if the the number of buyers is bigger. The same is true for sellers. If there are two buyers and one seller than the seller can always go to the other buyer if the first one does not want to make a deal.

A currency is just a store of value. It needs to fit the following criteria:

A currency doesn't need to have an intrinsic value.

Any precious metal/stone like Gold/Silver/Diamond/Ruby/... fits all of those criteria.

US Dollar also fits all of those criteria, because it's illegal to do 2) and 3) is actually harder than you think (special ink, etc...).

BitCoin also fits all those criterias. Point 1) is up to debate, but you can buy stuff at electronics store in Japan with BTC for example. BTC excels at point 5), which is the main reason for its success.

All of the above currencies are things which do not have any intrinsic value, yet they are widely used.

In a mediaval world, precious metal/stone would be a good candidate. 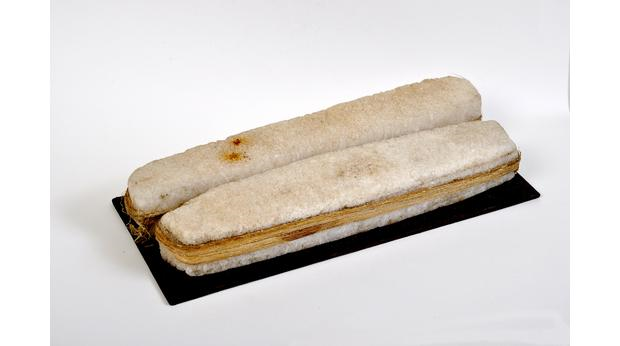 We moderns are spoiled by loads of cheap salt but in old days salt was a scarce and very desirable commodity, especially in areas far from the ocean. It can be hard to find salt in inland woods, like the places were these elves live. Humans and animals crave and need salt, so presumably elves too. It makes food taste good. You can preserve food with it. Salt blocks are compact, durable and will not spoil. Salt is fungible and frangible. Unlike gold or silver, salt gets used up.

Salt has been used as currency in many societies. The Romans famously paid soldiers their "salary" in salt. I read that the US paid soldiers in the War of 1812 with salt.

Your medieval traders could carry blocks of salt, and reckon the worth of other items like spices or wine in terms of salt.

It is not clear to me if the elves are environmentally correct only in their own environs, or globally. Either way salt is OK: it can be made by sun-drying brine, which is easy on mother earth.

I bet those elves are crazy for salty fish sauce. Now I want some.

I'll make a few assumptions, please correct if they're wrong...

So, for trading with humans ...

You don't need some kind of clearing-house currency. As bartering gets more intense, elves and humans alike could start accumulating one another's currency. This could start innocuously ... humans start trading for elf-coins as jewelry or collector items, because they're beautiful wooden tokens. Eventually merchants realize that they can buy more elf-stuff with these tokens. Likewise, elves are attracted to the heft and clink of human coins, and the clever bas-relief, and later realize that humans will accept them as payment in general.

Eventually you might get a situation like with the US and Canada. Many Canadian merchants will accept US dollars (though they might give change in Canadian). I imagine that merchants will come to a consensus the relative values of the different currencies on the fly.

Since elves "embrace non polluting technologies" they probably won't ever be able to mine and craft metal like humans do. On the other hand, humans cannot play with trees and plants like elves do.

A gathering of elven and human governors (or any middle-ages counterparts of them) could meet and introduce a currency which would represent the value for both sides.

Each metal coin would be enhanced by some "plant ritual" which would take the amount of work equal to the coins standard value or simply represent the coins value in "plant-magic way" - something we couldn't change . That way both humans and elves would be able to recognize what the new item is worth - twice the usual value. For ease of use they could change the number on the coin - 10 on a magic coin made of metal coin worth 5 and so on.

What's more, because of the double information, both parties would have hard time counterfeiting the coins and massive production would be much harder.

Not the answer you're looking for? Browse other questions tagged humans medieval fantasy-races trade .

19
What event could leave an ancient forest so burned it's impassable to humans and cause Centaurs and Humans to work together?
9
What would medieval battles look like if humans had fully prehensile tails?
7
What would be the main import and export of an advanced medieval jungle society?
4
How to differentiate between elves and men
3
How to compensate for the non-magic wielding humans, when others, such as elves, can?
1
War between human/animal shapeshifters and humans
33
How Would the Square-Cube Law change Medieval/Ancient Warfare Between Tiny Humanoids