How could a civilization trigger star formation?

I have a race that's about a Type II civilization (as per the Kardashev scale). The important thing here is that they're capable of building megastructures, such as a Death Star. They could build a Dyson Sphere or something on that scale, but it would be extremely hard.

For some reason, this civilization wants to make a star in the middle of a giant molecular cloud, which is a large interstellar cloud composed of gas (molecular $H_2$) and dust where young stars are born. For a star to be born, a section of this cloud has to undergo gravitational collapse.$^1$

Scientists (in our world) don't know for sure what triggers this collapse, but there are some ideas. One is that a supernova shockwave hits the cloud. Another is that two clouds collide and collapse.

How can this civilization trigger any of these events and form a star? Is it even possible?

Note: A food page to look at is the Wikipedia page on Jeans instability. That might help you come up with an idea, if you can figure out what quantities need to change.

Ok, I'll bite. If all you got in the area is a big cloud, mostly Hydrogen, with teensy amounts of heavies scattered about, and you're getting chilly, or wanna cook s'mores, and you need a New Star there toot sweet, as Granny Ogg would say, what can you do? 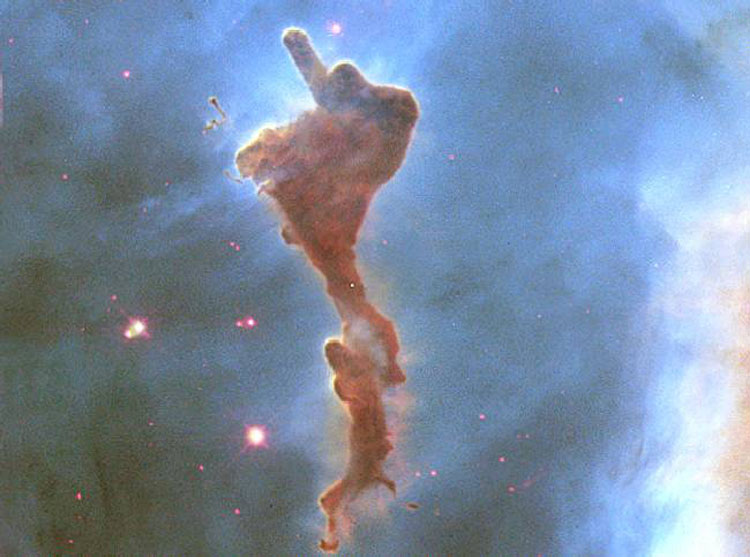 Above: Very Rude Nebula. Basically asking to be subjected to some serious fusion.

If you've got a death star, why not park it for a few centuries/millenia in the middle of the gas cloud?

Better yet, store all of your death stars in the middle of the gas cloud when they're not in use. Their gravity will help compress the gas cloud which will in turn increase the internal gravitational force it exerts on itself. Once the gas cloud is proceeding nicely towards stellar formation, and the center of the cloud is generating enough gravity to get it the rest of the way on its own, fly the death stars off to the next cloud of gas to create the next star.

Set up a large number of large thermonuclear bombs in a sphere around the correct mass for the star you wish to create and explode them simultaneously. This will create two roughly spherical shock waves one travelling toward the center of the sphere, another away from it. If the explosion was powerful enough to overcome the pressure of the gas cloud, the shock wave travelling towards the center will not stop until it has compressed the gas enough for it to collapse on its own gravity and form a star.

Build a really big ramscoop (a set of magnetic fields that funnel material toward a central point):

But reduce constriction so you don't actually achieve fusion. For propulsion use whatever it is that you're already doing as a type II civilization. Now the end result of running your ship through the GMC will be compressed "strings" of material, but it's still the H2 that you want to build your star out of.

By running the ship in several tight loops (think a spring or slinkie) you should be able to create enough of a clump that it will start pulling together under it's own gravity. Over time it will pull in more of the cloud and eventually turn into a star.

I am not well versed enough in the physics to be sure, but you might have to do several clumps to get your target stellar mass (assuming they'll eventually fall into eachother).

Physics: If there's a black hole nearby which is spewing out a powerful jet, the civilization could "just" redirect that jet to compress the cloud. By flipping the black hole sideways or setting up a ramscoop as proposed by Dan Smolinske.

Chemistry: The cloud is not collapsing because its pressure counteracts gravity. A "death star size" machine produces a cloud of particles which reacts endothermically with elements in the cloud (possibly as a catalyst, to reduce the amount of material produced). This cools the cloud, reducing the pressure. Alternatively, the new molecules have new degrees of freedom so that radiation can be absorbed as say rotation of the molecule, or they are able to radiate heat more efficiently in the infrared frequencies in which the cloud is transparent. All this reduces the kinetic energy of the cloud particles, reducing pressure and allowing it to contract.

Pulse X-Ray, Gamma and other high energy laser beams at precisely calculated areas of the cloud, ionizing the gas molecules that the beam passes through - ion attraction will condense those areas and eventually lead to stellar formation. (Ironically) Solar sail equipped magnetic field generators sailing through the cloud would also accelerate the condensation process in a largely automated process.

If we assume you have access to some kind of anti-gravity and artificial gravity technology, then just stick a gravity generator in the cloud, turned on to its maximum setting, and wait a few thousand years.

Not the answer you're looking for? Browse other questions tagged science-based space-constructs stars kardashev-scale .

21
Would a Type 2 Kardashev Civilization really build a Dyson Sphere around their own sun?
13
How can a Type II civilization influence accretion rates from a debris disk to a passing star?
15
Entry requirements for a Type n civilization
15
How can I make a black dwarf star?
6
Can my advanced civilization halt the expansion of the universe?
0
Is this scenario possible? How can it be done?-Dyson sphere replaced by gas giant star