How could two species (human and halfling) live side by side in the same society, without conscious integration of the two?

I'm cooking up a city populated more or less half and half by humans and halflings (with a scattering of other races).

My first thought was that halflings would generally have more or less human-sized houses (to allow their human friends and neighbors easy access), while humans would have a bunch of stepping stools around the house (to allow the halflings to use the human-sized furniture).

My second thought was that that might be a bit too humanocentric.

What are other ways that the two species might live side by side? Note that I'm not thinking that there are any conscious integration. This is simple two species that have lived side by side for a few hundred years, and learned the best way to do so.

If there's no conscious integration I would expect that many halflings will have accommodations unsuitable for humans and vice-versa. I say this because I observe in real life that most buildings that aren't consciously intended or adapted to be wheelchair-accessible, aren't accessible. Same goes for very short people: they aren't all that comfortable in a typical kitchen. Of course nothing like 50% of the population is in wheelchairs (or under 4 foot high), and if they were then house-builders would take more efforts to build for both. But they'd still have to do this consciously. It won't happen by accident because a human can always save some space by shelving to the ceiling and not having any step, whereas a halfling can always save loads of space by building small.

Publicly-used buildings (including shops, theatres and so on) would be designed for both unless you want to lose half your potential visitors. Buildings for governmental purposes might be required to accommodate both, assuming there's no particular discrimination against one or the other. Therefore techniques will be known, how to design for both without offending the dignity of either.

I would expect some human-bias just because (other than shelves) it's somewhat easier for a halfling to make do with human-sized stuff than it is for a human to make do with halfling-sized stuff. However there are plenty of things that could be designed for both in interesting ways:

Being cynical, one might expect that halflings can live more cheaply than humans (less square footage and less height), eat more cheaply (less food), but can do less manual labour (smaller and weaker). Therefore they might well not be economically equal to humans, no matter how friendly everyone is. They could afford to work for lower wages, and in some jobs are less valuable to employers since they chop less wood per day or whatnot. Do what you like with the economics and politics of this! But if there is a difference in subsistence earnings, then the species wouldn't be fully interchangeable as employees. There would be some jobs that it's too expensive to feed a human to do, whereas a halfling is cheap enough. There would likely be some jobs where a human does more work per unit pay than a halfling, so the situation is reversed and only a human is cheap enough. It might turn out that the species start to separate by profession/industry, but I think that by tuning the parameters you've got some freedom to decide which species is best in which industries. The reason I talk about subsistence earnings, is that once you can demand more than that for your labour/services, it no longer matters so much how many calories you need or how tall your house needs to be, you meet those basic requirements with a smaller and smaller proportion of your expenditure. 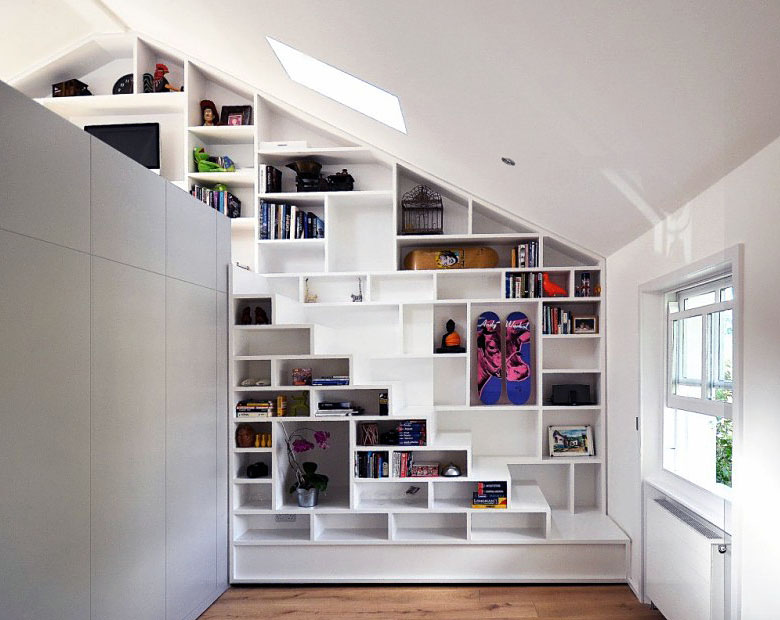 I would expect that for the most part there would be communities where like stays with like. Most halfling homes would be in the same neighborhood, most humans would be together as well. Humans do that all the time and we don't have such differences. How many cities in the US still have a 'Chinatown'? France's Muslim community seems to be mostly separate. How many Jewish quarters have there been?

Now that doesn't mean that there won't be conveniences and traditions for mixed race gatherings. As pointed out in the comments, Japanese style tables might be one way, or just lounging couches like the ancient Greeks had.

People who host others would more likely own some furniture more suited to them.

Sitting rooms would likely be designed for the comfort all. Maybe a halfling couch but up on a dais so that it is level with someone sitting on a full sized couch. A halfling sitting room would likely have a vaulted ceiling, etc.

But in general I think it would be extremely cost prohibitive to design homes that could cater to everything for both races even if it took setup time in between. To begin with a halfling home could be quite a bit smaller over all and still have the same relative space. Half as tall could use 1/4 the space to get the same amenities.

The biggest consideration here has little to do with the population but what level of development is your community? A city developmentally similar to 13th century Paris or somewhere in central Africa today might not change much regardless of the height of the individuals. It hardly matters when sleeping on rush mats on the floor and cooking over an open fire while there is hardly any furniture to be concerned with.

If presuming a fairly well developed wealthy/modern community, housing which accommodates both scales of people would be highly inefficient and considerably more expensive - dwellings and private areas would be specialized to be most comfortable for one size or the other. Public areas like restaurants or government offices could be adapted with accessibility in mind, but the added expense is hardly worth it otherwise.

The difference in height between the typical halfling and typical human is considerable - there is very little functional overlap. Think of how well a 3 year old (average height at that age is around 3 feet) functions in a normal house - it simply isn't sized for their comfort. We don't care so much for kids, as they grow quickly and don't seriously do much, but adult halflings need functional furnishings to go about their typical daily lives. The idea that buildings would all be human sized and often remodeled to fit the needs of different dwellers very much depends on how wealthy your society really is (a significant added expense to the cost of housing would encourage segregation).

Halfling dwellings would be scaled down appropriately, saving massive costs in materials and labor, not to mention significant structural differences to accommodate greatly reduced needs. Building to human standards would constitute gross over-engineering of everything. Even modern levels of wealth would likely find that highly wasteful for half the population.

Cultural differences in design would likely be significant, simply due to different perspectives and functional considerations. Do halflings like a cozy atmosphere of ceilings just above their head, or a reaching distance above like we tend to (which would be rooms only 4 feet high for them compared to the typical 8 foot ceilings where I live), or would they enjoy having what is in effect very high cathedral ceilings in every room? Personally I'm only comfortable with such high ceilings in entry-halls or grand dining-rooms (had I such a thing), but not so much in my bedroom, toilet, or study. These kinds of comfort considerations will determine what kind of housing they will tend to use.

Being half the population, and families being one or the other so it isn't a matter of accommodating an individual with a disability in an otherwise normal household, facilities would be built to suit their particular comfort. I don't see much overlap between species of such great differences in scale on a daily living basis. In terms of working relationships, such diversity would likely be very useful, but probably going home at night to a home built for their own species (after a night out in the pub with their friends of all sorts).

Ramps instead of stairs for public areas, otherwise you will have problems giving access to halfling children going to school.

Take, for instance, this reference picture of a generic fantasy setting: 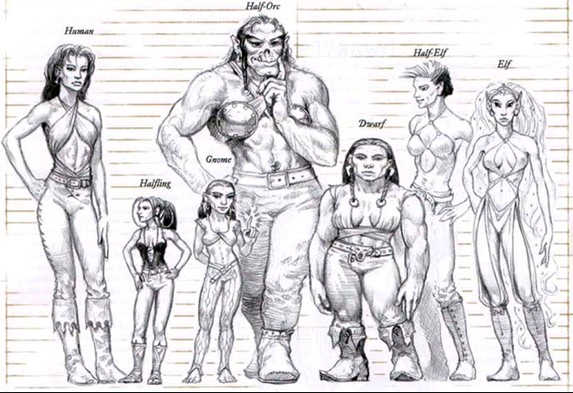 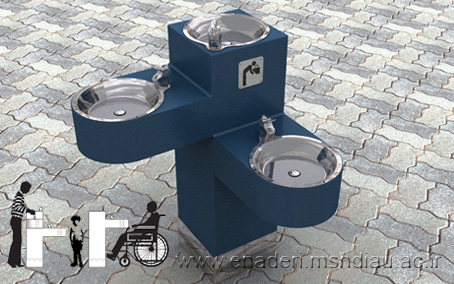 Houses that give easy access for 5 year olds is a good starting reference for design. Except when it comes to Halfling children.

Typically old cities grew from smaller villages growing up until there was no longer empty space between them. As such the city would originally have been composed of human villages, halfling villages and whatever made the area attractive enough for a city to be created. A market place, a harbour, a ford, a keep, a religious or political center... whatever. However eventually the villages would start working together for defense, handling relations with local ruler, and administering the focal resource. They'd set up a method for settling disputes. Eventually these would combine to give the city a common identity.

However to society would still be based on those original, probably almost entirely single race, villages. That would be where people would live and spend most of their time in. With their friends, relatives and family. This would be the group they'd identify with first, with the city second, and maybe their race or guild after that.

The reason these districts evolved from villages would be single race is because people did not really move that often. They'd have a family house built next to the house of their relatives by great-grandfather few hundred years ago. Or by their uncle after the last great fire. The point is people would live next to their relatives, who'd probably be of the same race.

There would probably be mixed race districts for transient workers or the destitute, who'd have no meaningful relatives to live with in the city. Even there it would be easier to have separate halfling houses and human houses.

Most businesses would also be single race because they'd be local to the district. The exception would be any businesses or services so specialized you would need relatively few of them in the city or that needs to deal with travellers. So while a halfling district might deal with common legal issues itself within the halfling traditions, anything rare or serious would be bumped up to mixed races courts of law.

I doubt this would cause significant friction between races absent some political or religious agitation. People do not feel close to their own race, they feel close to their neighbours, friends and family. A stranger is danger even if they are of the same race.

141
A Most Subtle Magic
25
Symbiotic benefits for large sentient bio-machine
52
How can I provide reasons for racism?
1
What would a society where humans coexist with a second species with the intelligence of an 8 year old look like?
1
What's a possible justification for Giants not taking over the world?