How large could a frog be?

While Prionosuchus and other large temnospondyls are definitely imposing and capable of causing mortal harm, they still adhere to a distinctly salamander-like profile. Anurans (relating to frogs or toads) seem to have not gotten any bigger than an unimpressive beachball of meager weight. Beelzebufo may have grown larger given incomplete cranial sutures but it's doubtful it grew to the size I require...

Now, how large can can a non-specified species of frog or toad be before the square cubed law makes the creature unable to actively hunt other organisms?

Emphasis on actively : The thing may be rendered unable to hop, jump, glide, climb or otherwise gallop due to physiological restraints but it must be able to chase and either swallow a man whole or rip him to pieces.

Edit: Actively was meant to be "not a crocodile mimic". Originally, I vaguely considered a creature resembling a bullfrog or cane toad but was unsure what the bodyplan would allow:

Could it bellycrawl at high speeds for short distances? Could it manage a meager hop or a full-fledged leap? Would thick toad skin help it resist injury and better carry it's physical load? Would it's tongue be rendered unable to shoot out of it's mouth due to it's mass?

1: We will make an end run around some aspects of the square cubed law by putting your frog in the water. This is a fully aquatic giant frog.

2: Let us consider an aquatic animal that is capable of eating a human. The Goliath grouper can grow to 800 pounds. 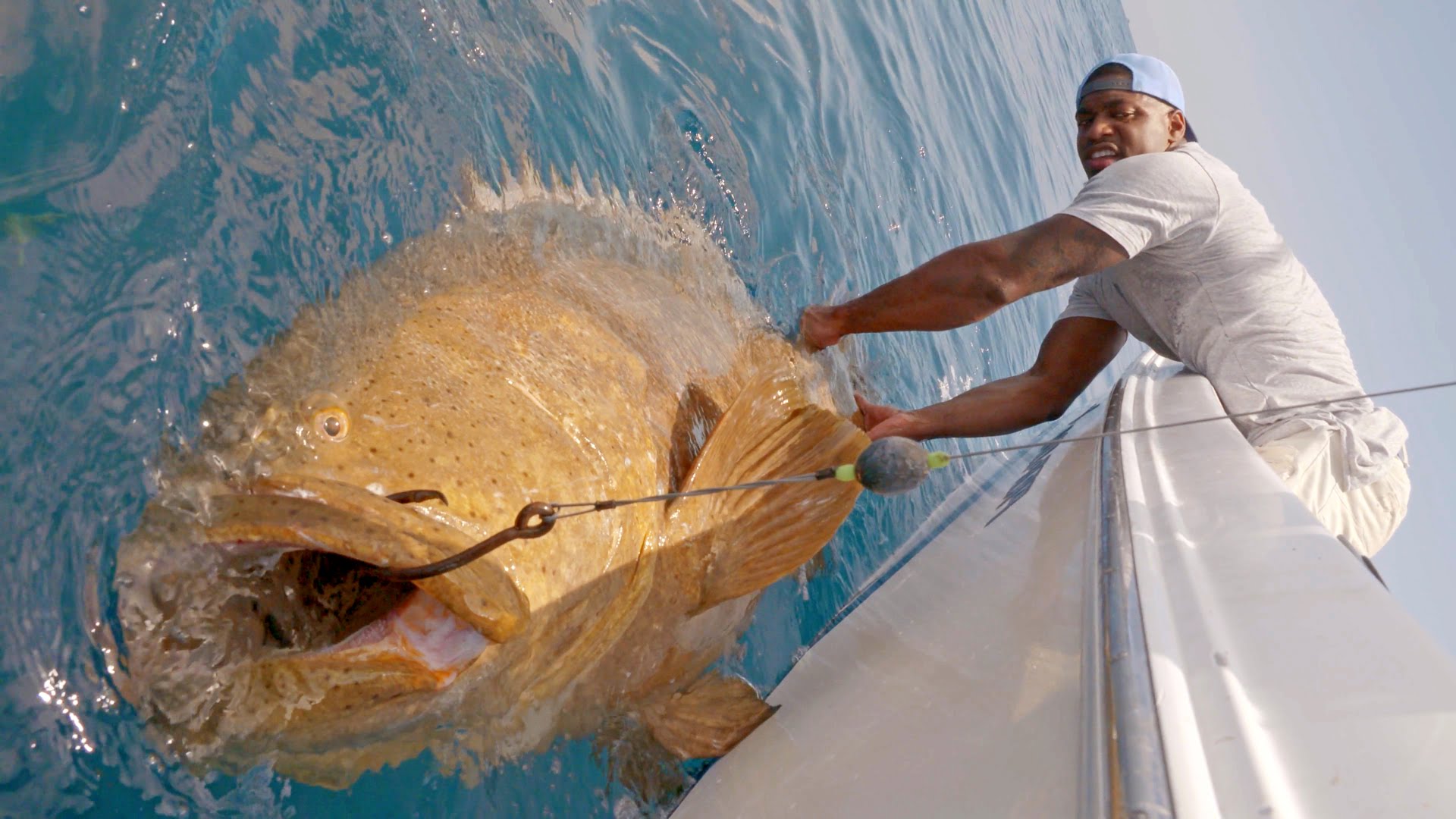 Clink the link to see a grouper come up and take a 4 foot shark off of a hook and leave.

Groupers also have a feeding strategy that would suit a giant water frog: they open their mouths and produce suction, pulling everything in. Other aquatic predators do the same; largemouth bass come to mind.

3: Our model frog will be the Lake Titicaca water frog aka "scrotum frog". It is the largest living aquatic frog. 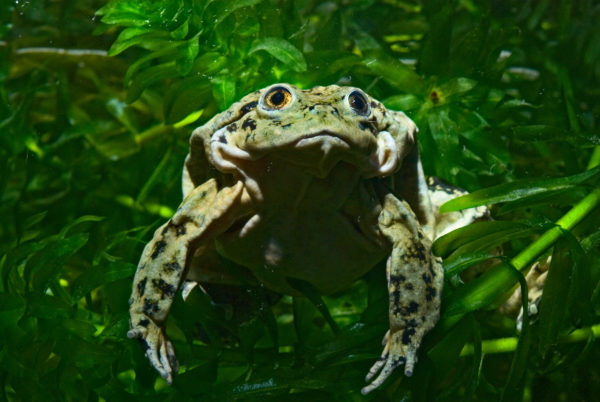 The water frog has lots of redundant skin and it uses all that skin as a respiratory organ instead of lungs or gills. On the Jacques Cousteau show, Jacque once referred to these water frogs as "swimming bags:". That redundant skin could also help increase body capacity.

The frog skeleton is actually well suited to produce a giant bag with a mouth and legs. Frogs already do not have ribs. 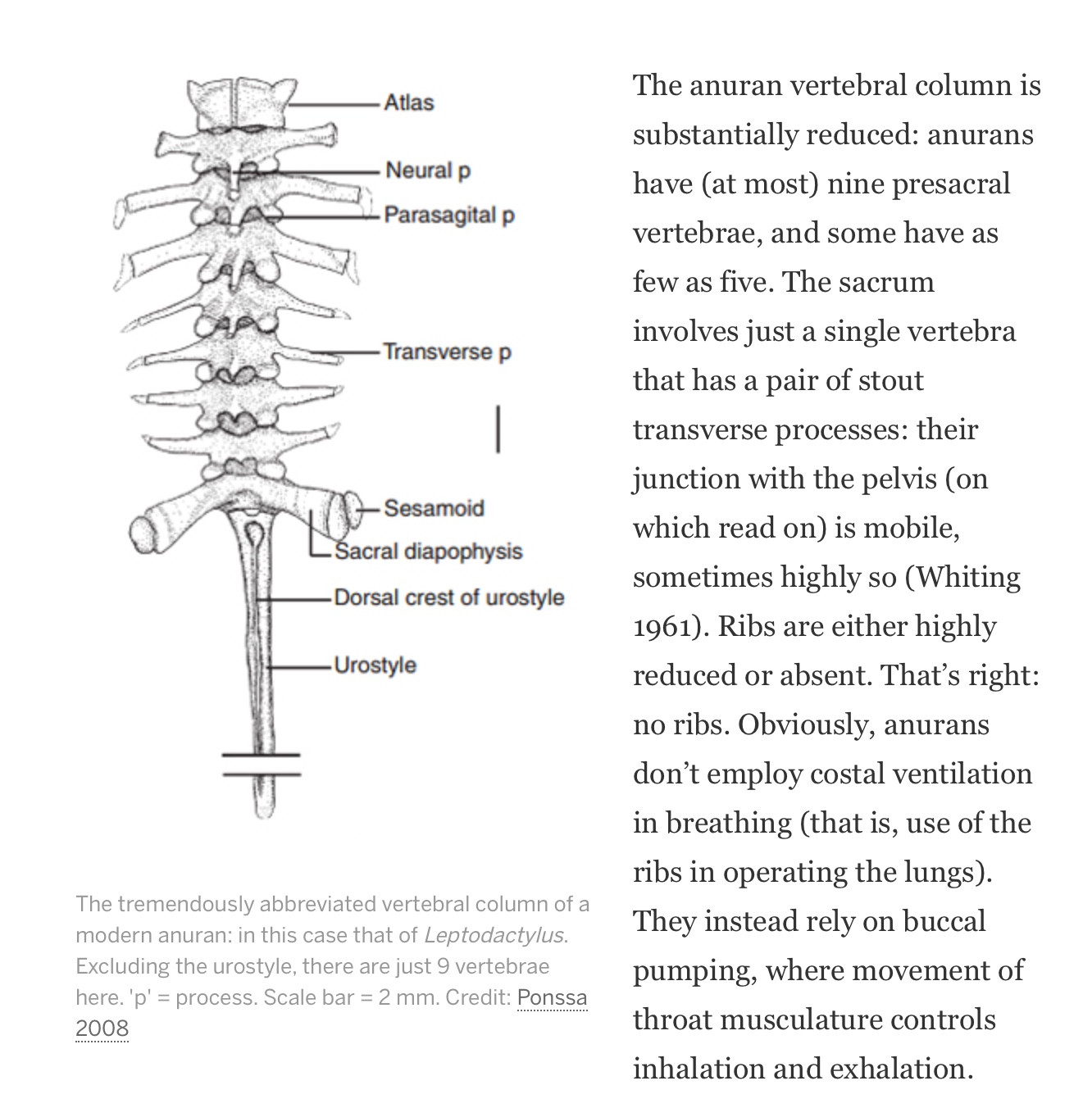 Now scale up the scrotum frog. It will become an ambush predator like a largemouth bass or grouper. Probably since it has fewer bones and fewer muscles it would be lighter. So it could be bigger: just a giant bag on a minimal frame.

The skull is scaled up to allow the "suction strike" of a bass or grouper. Once the prey is between the jaws the frog gives a powerful kick of the legs (the frog forté) and advance the bag like body over the prey.

The large prey now finds itself not especially damaged, but within the frog. For animals of this sort that swallow prey whole, this works. I suspect animals suffocate in short order. Even durable prey with sharp teeth (like the shark swallowed by that grouper) would have trouble getting a purchase with teeth to bite free. A man with a knife could cut his way out. A man with no tools would suffocate and be digested.

The high end of aquatic vertebrates is staked out by whale sharks and whales. An enormous redundant skin should be as much oxygenation apparatus as a gill and so these toads should be able to get to be whale shark size.

Maybe bigger. Maybe gills are the reason for the high end of water breathers, and using the skin for respiration would allow larger size. A thing like this would not need to swim to force water through the gills and would not need to lift the head to breathe like a reptile or mammal. These immense frogs would rarely swim, just drifting along, waiting for something to come into position in front of the mouth. The mythical island-like zaratan is usually a turtle but a huge floating frog would be even better. 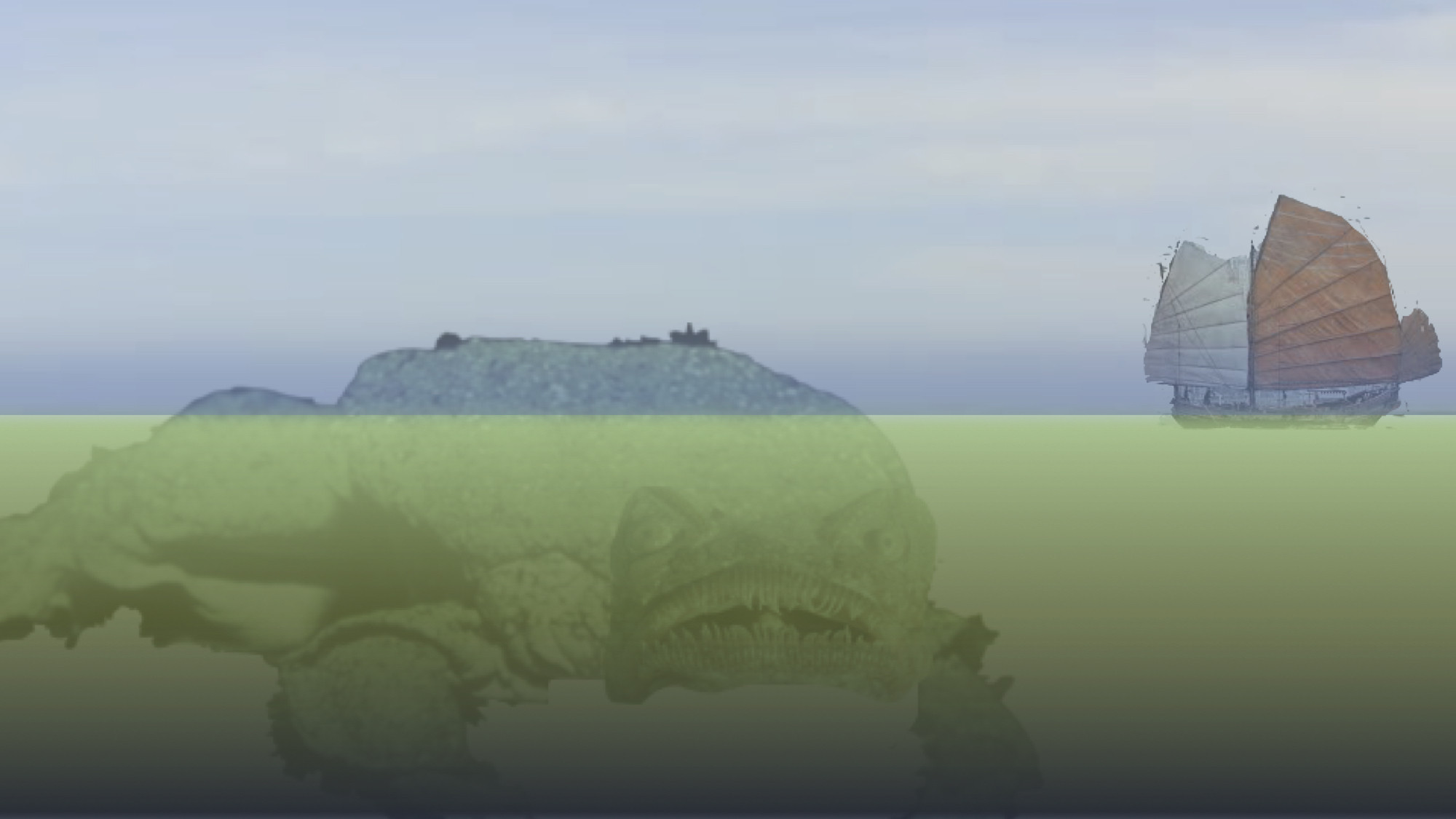 Not the answer you're looking for? Browse other questions tagged biology fauna bio-mechanics or ask your own question.

16
Cohabitation with large creatures
1
The Frog and the Jelly
36
Could a large bird be used as transportation?
7
Flying Mammal Roughly The Size of A Large Dog
10
How large could my sea serpents be?
6
How large could a giant turtle get?
4
Could an Environment Sustain Large Eusocial Animals?
5
How fast can a large animal knuckle-walk?
4
How a living creature could develop a way to create high pressures inside its body?
6
How could an efficient respiratory system evolve for giant arthropods?