How early can nuclear reactors be built?

Given ample access to uranium and a race that is naturally resistant to radiation poisoning, how soon could a civilization invent nuclear reactors?

Oklo is the only known location for this in the world and consists of 16 sites at which self-sustaining nuclear fission reactions took place approximately 1.7 billion years ago, and ran for a few hundred thousand years, averaging probably less than 100 kW of thermal power during that time

Make your race live in that time, and they can figure it out. We discovered fire looking at trees set on fire by lighting...

The important question here is "what kind of uranium?". It's not a spurious question - the type and richness of the deposit determines how readily this could be accomplished - as well as its isotope ratios.

Once upon a time, there was a natural nuclear reactor in Africa. Fission reactions (admittedly very limited) occurred in situ in the uranium ore, using water as a neutron moderator. This was facilitated by having the isotope ratio of U235 to U238 be higher billions of years ago than it is on earth today. So if by some happenstance your planet has a higher natural U235 ratio (likely because it's a young planet), that makes things easier. (Otherwise, you're going to have to wait until your people work out what isotopes are and how they work, in which case you're going to see a timeline similar to what we had on Earth).

The other issue is extraction. Natural uranium ore is not particularly radioactive - you or I could safely hold the stuff in our hands without any substantial risk, and that's not useful from a fission perspective. Extracting useful concentrations of uranium from uraninite is not as simple as smelting base metals - generally it requires non-trivial chemical processing (sulfuric acid, special resins for solvent extraction, etc.).

I don't know whether there's a reasonable science-based reason that you'd get naturally-occurring uranium ore rich enough to not require processing, but that's basically what you'd need, radiation-resistant or not, to get nuclear reactors any earlier than they were created here on earth. (It's not our lack of resistance to radiation that made it take a while here.)

If you had naturally-occurring super-rich uranium ore that had a high U235 ratio, all you'd need is for someone to notice that putting enough of the stuff in water, or sticking carbon into it, caused the whole mess to heat up. At that point, you have heat generation, and mankind (or hypothetical alien-kind) is good at using heat. We've (they've) been doing it for a long time. Getting to that point in a science-based fashion is difficult, though.

Being radiation-resistant doesn't cut it for speeding reactor development, unless the "ample" access to uranium is already-refined uranium from a more scientifically-advanced species.

Assuming that you have access to naturally enriched U-235 ore, it is actually possible to create a very simple nuclear reactor with very primitive materials.

In Stephen Baxter's novel "Manifold: Space", the hero is sent back in time (or to an alternate universe) where a primitive tribe actually has a small nuclear reactor generating heat energy to boil water for heating. The description of the reactor is essentially an underground cave with a stream running through it. The enriched uranium rocks are piled together to reach criticality, and the reaction is moderated via slaves pushing the rocks around with charred wooden poles (the charcoal is the analogue of the graphite moderators in some types of reactors). While not mentioned, it can be assumed there are more charred pieces of wood in the pile to moderate the reactors, and no surprise, the slaves who work in the reactor core tend to die very quickly....

The efficiency of such a reactor can be assumed to be very low indeed, and even if you had enough slaves to do things like pile rocks between layers of charred wood there still would not be a tremendous amount of thermal energy to heat the water flowing through the cave. If the cave is immersed in water and the rock "pile" is underneath, there can be assumed to be a somewhat great level of efficiency in the reactor core, since large amounts of water can serve as a neutron moderator, but the large mass of water will also be correspondingly more difficult to heat up.

One would have to handwave like crazy to progress from there, since a proper nuclear reactor would require a very great understanding of physics, chemistry, heat transfer and many other sciences and technologies in order to create something even as primitive as the "pile" under the University of Chicago which demonstrated nuclear energy for the first time. 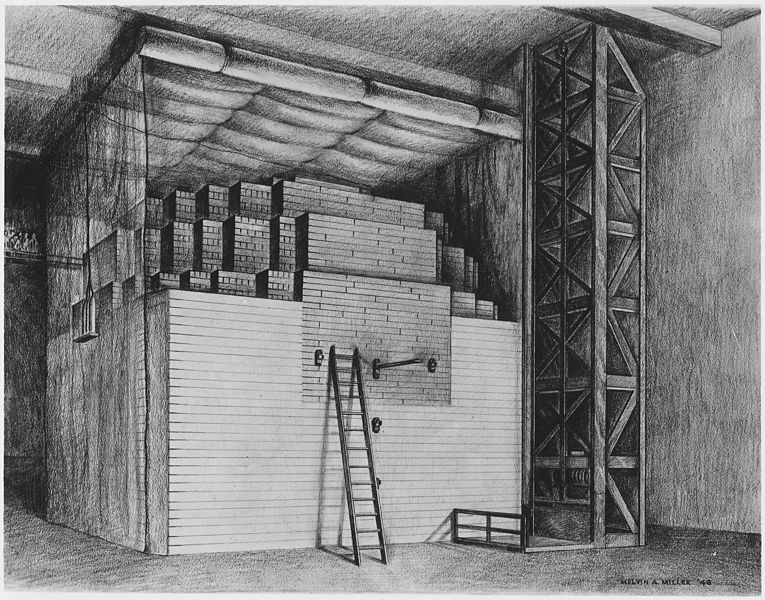 If you will accept something of a handwave, I would say roughly 1850.

The absolute hard limit is about 1800 as you're not building a reactor without uranium and thus you need to know what uranium is.

New uranium is about 60% U235. This is high enough that you can have a criticality accident if you pile up too much of it, even if it's in it's natural form of pitchblende. Now, there have been survivors of criticality accidents--somebody on the other side of the lab might witness it without being killed in the process.

At this point the scientific community understands that something very strange indeed happens when you pile up too much pitchblende. Since the researchers don't want to die the obvious answer is remote control. You don't need modern robotics for that--put your pile behind thick blast walls and use mirrors to look inside. Use ropes to manipulate containers of pitchblende.

Now they'll learn that there's a realm in which they get hot without going boom. Now you have nuclear reactors.

It's going to be some time before they figure out the cancer problem, though.

The handwave: There's no way you'll have a race living on a planet that has new uranium on it. It takes time to go from a supernova to a new planet and it takes time for that planet to evolve life.

I can't see the accidental discovery of a pile based on terrestrial uranium.

You need some advanced metallurgy to purify the uranium. The base chemicals for that are not very difficult to make, if you know how.

Enriching the U-235 is out of the question, that's really high tech.

To run the reactor with present-day isotope ratios, you need heavy water. That's much easier than enriching heavy elements, albeit still very cumbersome.

Not the answer you're looking for? Browse other questions tagged science-based science-fiction aliens or ask your own question.

2
A modern or near-future civilization without nuclear technology?
3
mountain fallout glasshouse construction
4
How can nuclear power produce -electricity- in space when energy must be converted differently?
5
Could a wizard create a nuclear explosion without building a bomb?
9
Nuclear power for nomads
5
Could natural nuclear fission reactors be used to energetically sustain and catalyze the progress of an alien civilization?
6
Post nuclear apocalypse fauna
4
Unpredictable reactors which like to explode by default