The light from the sun is dissipated in a sphere, so there is a squared relationship between the distance from the sun. Would it be possible to place either a lens or solar collectors with a laser to focus energy from an area near the sun and sent it to a satellite in earth orbit which would in turn send it to the surface of the earth? I did some basic calculations and found that using a 1 sq meter of light, you could get about 1GW of energy if you were about 1000x closer to the sun than earth. If a 100m x 100m grid was used this would be 10TW which would be more that enough energy to power the earth. (All assuming 100% efficiency)

Would either the (multiple) lens or the power generation to a laser be a possible solution to transfer energy from an area close to the sun to earth?

I feel this is not a duplicate of this because this would not be used for fusion generation.

Let me make this scheme a little safer.

Lenses? You're thinking too small, my friend. A photospheric laser can provide so much energy you will be growing potatoes in the open air on the moon Triton in the orbit of Neptune

The trick is to utilize the solar photosphere as the lasing medium, allowing you to scale the laser to unimaginable power levels without all the fuss and muss of solar collectors, giant electron beams, wigglier magnets, diffraction gratings and so on. The basics of the idea can be found in an article entitled "Constructing Artificial Laser Stars by John Talbot".

The mirror method would extract laser energy by creating a resonant cavity in which the radiation would make multiple passes dramatically increasing the effective gain. The path would ideally be perpendicular to any velocity gradient in order to reduce Doppler smearing and increase coherence and thus directivity. The laser beam is emitted tangential to the surface of the star.

Sherwood (1988) described a platoon of orbital mirrors around Mars or Venus to extract a coherent and directed CO2 laser beam from the gain medium. He foresees the use as means of transmitting/propagating our entire culture to a future nano-civilisation established in various other solar systems throughout our galactic neighbourhood.

Mirrors external to the stellar atmosphere would reduce the problems of erosion and orbital deflection by the violent and corrosive stellar winds. Although pairs of mirrors would be ideal to extract directed energy from the gain medium, there are power limitations due to the finite reflectivity of the mirrors (which absorb a small but damaging fraction of the radiation). To overcome this problem larger mirrors could be constructed to distribute the heat load, and reduce the Airy diffraction pattern (beam divergence). However large mirrors are extremely vulnerable to orbital debris such as an encounter with a handful of sand from an intersecting orbit etc...

Large mirrors will act like solar sails, this side-effect could be used to maintain a stationary satellite (statite) over the desired location near the solar limb. (see papers on 'statites' by R.L. Forward) The photon pressure from the laser photons and the photosphere could be adjusted to exactly compensate for the solar gravitational force and prevent the hovering statite from falling onto the star's surface. Conservation of momentum would impart a momentum of 2p every time a photon bounced off the mirror. For a multiple pass optical cavity the photon travels back and forth many times stimulating emissions at every pass. The force on the mirrors from this photon pressure in combination from the photon pressure from the star's photosphere acts like a solar sail and can be designed to exactly balance the inward gravitational force pulling the mirror onto the star. These three counterbalancing forces could be harnessed to maintain the mirror stationary against the gravitational pull of the star. ('statites' or stationary satellites by R.L.Forward). Very near the star there may be deviation from 1 over r squared law by dilution of radiation effect of finite angular width of solar disk.

If more than two mirrors are used a ring laser could be produced, the radiation would make numerous quasi-circular trips around the sun; in other words, a photon merry-go-round spinning at the speed of light!

The mirror scheme will produce an artificial laser star, which would appear as an extremely bright spot on the limb of the parent star. The disk of the star would be difficult to discern in the glare from this 'star-like' spot. If we take photographs of the sun and are careful to mask out the bright point, we would notice a faint disk, corresponding to the light from the underlying 'natural' sun. Although most stars are too far away to resolve their disk, amateur astronomers could easily observe the unusual spectra of laser stars.

In order to send the beam to where you want it to go, a series of huge mirrors or fresnel lenses in free space will be needed to steer the beam, this is similar to Robert L Forward's plans to use super lasers to power light sails to distant stars. 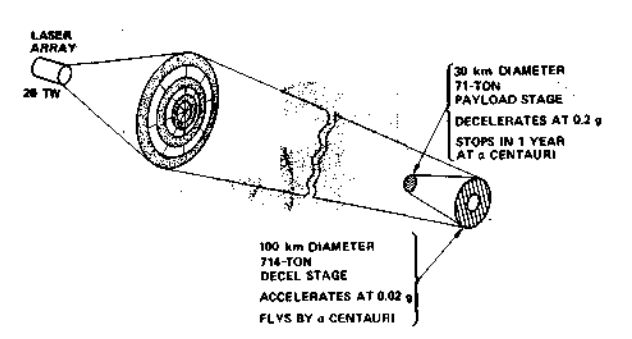 Modulating this amount of laser energy to power the Earth is a matter of calculating the amount of lasing plasma is needed for a particular power output, sizing the photosphere mirrors accordingly and if necessary, splitting the beam on its way to Earth and directing part of it to other cooperative targets. Modulating the beam to a frequency where there is an atmospheric "window" for passage to the ground is important, and then the beam is collected by high efficiency solar cells (which can work at a high level of efficiency since they will be tailored to the frequency of the laser).

Problems like heat rejection will be left as an exercise for the reader, but there will be no need for thermal, nuclear, hydro or other power plants if you are harnessing the Sun's energy on that scale.

Even if you avoid that, I suspect that the final stage - trying to get the energy down to ground level - is likely to have severely nasty effects on the world's weather system. Even tiny losses are going to dump vast ammounts of energy into the atmosphere.

BrettFromLA's comment raises another issue - never mind about accidental breakdowns, this thing would be a hugely dangerous weapon... Who do you trust to control it when whoever does can toast their enemies by tweaking the targeting? And who need nukes when all your terrorist factions need is a disposable mirror package they can steer into the beam? it only has to last a few seconds to fry a city you don't like...

And yes, you're right, putting it closer to the sun means it can focus more energy per square meter of mirror, potentially cutting costs.

Not too close to the sun though, or the cost saving is lost on cooling systems to stop it melting.

It may also make economic sense to have it orbit not too far from a human settlement, so when it needs fixing you don't have a ten light minute gap between your engineers and your repair bots or a six month journey to send replacement bots.

It seems reasonably plausible for me. the only point is that a lens device so near to the sun needs some special technology to handle the radiation otherwise it will just melts and too will need a propulsion system to keep every time on the right way to focus the energy on the earth's orbit.

There is a concept which has been around in Science Fiction for quite a long time which is similar to what you are looking for: a Dyson Sphere.

A lens would not work, but you might be able to harvest enough energy from such a superstructure to make the transmission cost worth the investment. Obviously, capturing "most or all" of the output of your own sun would be suicide, but there could be a sweet spot. Anyway this idea is relevant to your interests.

A Dyson sphere is a hypothetical megastructure that completely encompasses a star and captures most or all of its power output. The first known mention of the concept of a star enclosed by a sphere was in an early Indo-European religious creation myth which described the prenatal sun as being enclosed (imprisoned) by rock.[1] The first contemporary description of the structure was by Olaf Stapledon in his science fiction novel Star Maker (1937), in which he described "worlds constructed of a series of concentric spheres" and a similar galactic-scale natural formation of a "rocky sphere that had once been a galaxy." The concept was later popularized by Freeman Dyson in his 1960 paper "Search for Artificial Stellar Sources of Infrared Radiation".[2] Dyson speculated that such structures would be the logical consequence of the escalating energy needs of a technological civilization and would be a necessity for its long-term survival. He proposed that searching for such structures could lead to the detection of advanced, intelligent extraterrestrial life. Different types of Dyson spheres and their energy-harvesting ability would correspond to levels of technological advancement on the Kardashev scale.

Since then, other variant designs involving building an artificial structure or series of structures to encompass a star have been proposed in exploratory engineering or described in science fiction under the name "Dyson sphere". These later proposals have not been limited to solar-power stations, with many involving habitation or industrial elements. Most fictional depictions describe a solid shell of matter enclosing a star, which is considered the least plausible variant of the idea. In May 2013, at the Starship Century Symposium in San Diego, Dyson repeated his comments that he wished the concept had not been named after him.

12
Fusion: Using a lens to focus the energy of a star

16
Energy source for a generation ship
6
Desalinated water "energy density"
4
Using lasers to transmit solar energy
14
Off-planet energy production - what would be best way to supply this energy planetside?
2
Viability of animal plant? (Energy calculation)
9
Can fiber optic cables be used to pipe sunlight into an underground bunker for growing plants?
6
Stellaser Part I: Trial by stellar Fire or The best design out of three for a solar powered 5 Petawatt laser?
11
How close to the Sun would you have to be to hear it?
10
How would a Dyson Swarm transmit energy to the Earth?
5
Best way to convert solar energy through a portal