Knowledge of human anatomy - how effective (torture) is it in a medieval setting?

I'm writing a fantasy-medieval story in which one of the main characters has extensive knowledge of human anatomy. He knows all of the organs and what they do, and knows things like where muscle groups are located and where nerves are. Basically if it could be found out in medieval times, he knows it.

I want him to be able to use this knowledge to control exactly how much pain his victims feel. The problem is that I do not have much knowledge at all of human anatomy, and am not sure how far this character's knowledge could take him.

I don't know how he would do these things, or if they are even possible (thinking specifically of the painless one). So I have two questions disguised as one: using only swords, daggers, or similar weapons, can an individual both kill someone quickly and painlessly as well as slowly and painfully, as well as causing maximum pain while not killing the victim? If this is possible with medieval weaponry, how would it be accomplished? What areas of the anatomy would he target?

I apologize for the rather grisly topic. He's a rather grisly character. I tried doing a Google search to answer this question, but only got things like suicide hotlines.

Medieval knowledge of medicine was quite good concerning bones, nerves and muscles. Not so much for organs (they didn't know what the liver did, for example), but they could torture very effectively. You can look for "Wound Man" in Google Images to see the diagrams of what they knew: 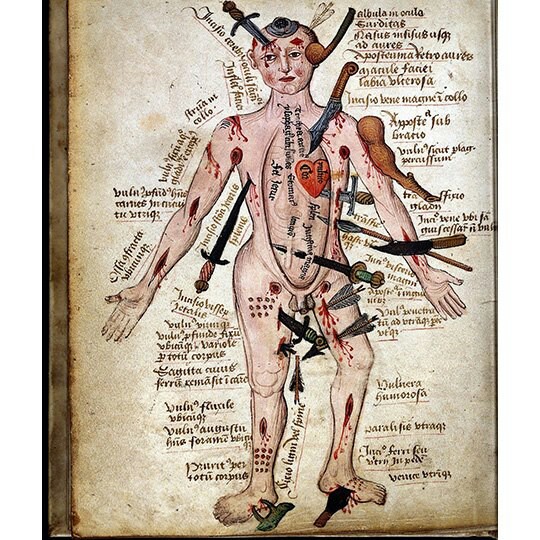 For a painless death, the easiest way is severing the spinal chord at C3 (the vertebra), which can be done by snapping the neck or by introducing a dagger under the nape upwards.

The most painful torture I can think of in Medieval Times is the maul. Using a big hammer, smash the fingers and the toes and then follow with the articulations: knees, elbows, etc. However, Medieval instruments of torture like the wheel were used because luxations are very painful and it's better than breaking articulations. Mainly because people could still walk after having their legs overstretched, for example, but if you broke the knee, the limb was forever useless.

Also, if you break too many bones, you can cause lacerations in the blood vessels (and internal bleeding), which was a danger known in the Middle Ages. Unknown to them, it also can start a toxic reaction in the body that stops the heart (this also happens with trapped limbs, for example), but I don't know the details of it.

Tearing off eyes and teeth (and cutting the tongue) was also popular and painful. Glokta, a character from The Blade Itself by Joe Abercrombie, is a torturer who was previously tortured himself. He hates stairs because his legs hurt a lot, but he has every other teeth in his mouth removed and it is very touching the problems that causes him. That trilogy has also scenes of torture which might help you. I remember that Glokta once cuts the fingers of one hand from his prisoner in the middle of his first sentence to him. That impressed me.

For a historical reference, during the Albigense Crusade, prisoners had their eyes removed, nose, ears and lips cut. They left one prisoner with lips and nose to tell what happened and another one with one (or both) eyes to guide the other prisoners.

Castrating, as made famous by Game of Thrones, has to be very painful, but you risk death by bleeding too much.

If your prisoner has to endure a long torture, your "executioner" will need to let him rest from time to time (and also rest himself), but if he is good, he will know that some tortured prisoners bit off their tongues and swallowed them to suffocate themselves and stop the pain.

To prevent it, put a piece of cloth in his mouth. And because there is a limit to the amount of pain screams a man can listen to.

Without going into too gore details, I think you don't need deep knowledge of anatomy to effectively torture.

Medieval time knowledge of anatomy was largely wrong, but still torture was pretty effective. It was pretty much an "art" transmitted along the generations.

Just give a look at Wikipedia page on torture and all the links there listed.

Not the answer you're looking for? Browse other questions tagged medieval torture .

12
How can a society deal with berserkers?
13
How much could basic sanitation and disease prevention combat illness in medieval and renaissance era?
2
What effect has would retirement have on the skills of "The Hero of Legend"?
8
Is it realistic or possible to implement the loading mechanism of a shotgun into a crossbow?
38
What could make a remote village also have reasonably high traffic?
31
Creating a medieval dropforge
6
Feasibility of mute Soldiers on a medieval battlefield
3
How to found a new independent city-state in a medieval setting?
31
How long will it take for a medieval human to adapt to our current world?