What could cause the desert?

I am wondering about this map, from the game Albion (not Albion Online): 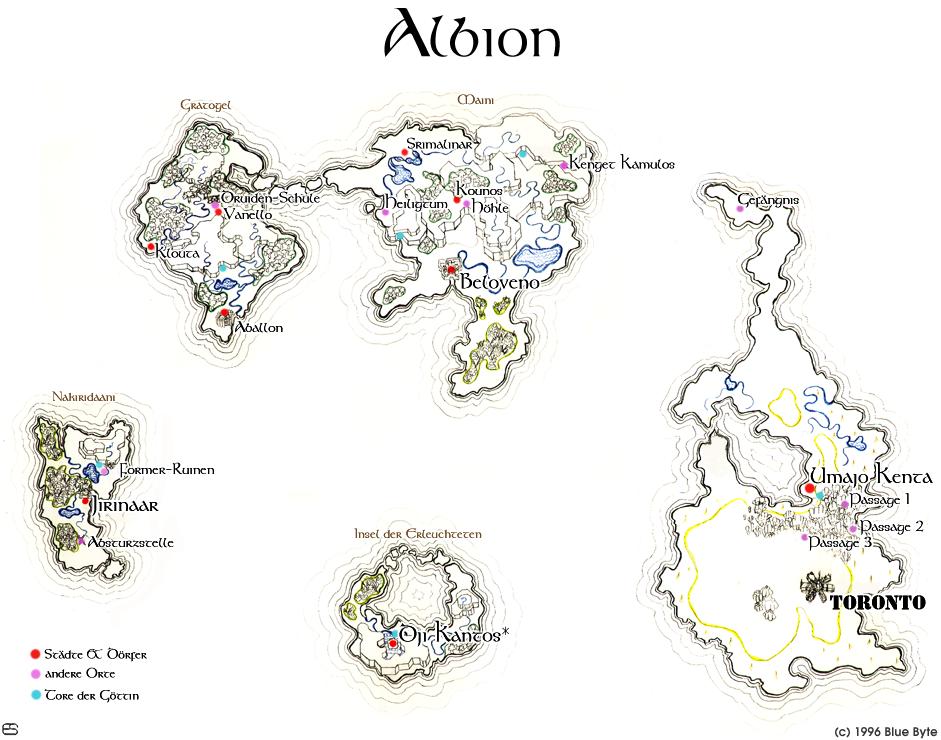 The island on the right (Umajo) is an arid one, mostly covered by sandy deserts, except for an area of savannahs at the very south (not pictured in this map). The other islands are either completely covered by tropical forests (i.e. the ones on the bottom and left-bottom). The rest is temperate climate/forests type, except for the peninsula in the middle of the image, under Beloveno, where jungles start to prevail. It mostly matches the northern hemisphere of Earth, except for the arctic and subarctic areas.

Now it seems weird to me that deserts formed on that island, though it's larger than the other islands (but the deserts span from coast to coast). I assume that the map uses the usual directions (right is east, top is north), thus the island lies in both the temperate and tropical zone, so it should be more akin to the other islands lying there. So my question is - what natural process could cause the formation of deserts on the island (and also the hot climate present there).

From what I know about this world, it is located in the same universe as the Earth, so same physics should apply. However, magic is also possible on Albion, but I'd rather look for a natural cause.

We also know that the planet has gravity about 0.8 G, and no axial tilt, leading to the complete absence of seasons on the planet. The revolution time is the same as Earth's, so it has the same length of the day and year. The atmosphere is also quite cloudy, but from from I observe from other artworks, the sky above Umajo is clear and cloudless. That may be the cause (or the effect?).

Edit: As human activity can be a factor in this, I have to clarify more about the population. The humans that live in this world are the descendants of the Celts originally having come from Earth ca 2000 years ago, and therefore I suspect that it's unlikely that deforestation created the desert. The other (and original) inhabitants of the world live in great harmony with the nature, and wouldn't willingly cause any deforestation in that area.

The age of the game also makes it a bit harder to express the exact relief of the island, but aside from a mountain/boulder ridge in the central area, the island is mostly flat.

To illustrate the nature of the island, here are some images: 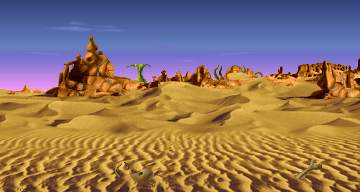 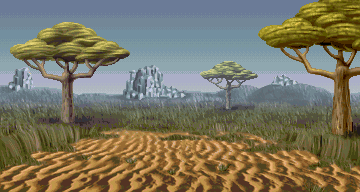 Draw the jetstream in this world around that island such that it does not experience substantial rain.

If the side of the island that faces the incoming jet stream or "prevailing westerlies" type of winds has high mountains or cliff faces, the weater will drop rain right there or it will slide around the island.

If the island is principally volcanic in nature, the soil is rocky sand rather than smooth sediment and will both absorb heat more and fail to capture any but the hardiest of plants.

At the end of the day, admit to its creation

You need to realize that the creators of the game most likely created the map with no intent of being geologically or meteorologically correct. It's fun to speculate as to how it might be, but imposing rules and governance on a creation that's 100% fiction is almost always unsatisfying. Consider my answer about plate tectonics in Tolkien's Middle Earth where someone wanted to know what the in-universe explanation was. Most of the time, the answer is, "well, I made it that way."

Just model it after Socotra in Yemen minus Socotra's mountains. It is a world heritage site. http://whc.unesco.org/en/list/1263

The converse must also be true. Vapor pressure increases with increasing temperature, lowering the relative humidity in the process.

As an added bonus, Socotra comes with unique species like the Dragon's blood tree to help you populate the landscape. https://earthobservatory.nasa.gov/IOTD/view.php?id=78411

The combo of hot air (boosting the amount of water needed to reach 100% humidity) and cold water (lowers the rate of evaporation) leads to air that is very dry even though it is above the ocean. Monsoons do not like dry air. You end up with wind but no moisture. Finally, make the island entirely flat, and you are good to go.

Take a look at earth deserts, e.g. the Sahara, some of them border oceans and other bodies of water and still are mostly sand/deserty-stuff.

As long as there's an absence of any precipitation there won't be much growing. Clouds need a motivator to make it rain. Most often this motivator is either mountains or too much water in the air. If you get rid of both you don't get much rain.

As a reference (less extreme, but...) you can look at two largish and very similar islands in Mediterranean: Sardinia and Corse.

Sardinia is not desert, but very arid, while corse had large and high forests.

Both climate and geology is similar. What happened?

Man happened. Both islands were covered by forests but, while Corse was not meddled too much, Sardinia forest were burned down to make pasture for sheep and goats.

This changed completely climate because while in Corse land is colder then sea (due to forests) in Sardinia land is much hotter than surrounding sea.

This fact inverts prevalent air circulation and while in Corse sea humidity rises and is sucked down over land, raining on it, in Sardinia you have the reverse: normal circulation is hot air rising on land taking with it the scant humidity present and then going to discharge rain on sea.

To have an island with desert climate is enough to cut all (or good part) of forests on it; if there is enough sunshine it will do the rest of transformation.

I believe the most common cause of dessert on earth is humans. The process is actually called desertification. It usually involved deforestation, poor farming practices, poisoning the ground, and a natural tendancy to low precipitation.

However you state that this is a land that is "one" with nature.

Perhaps the people are one with nature because of what they did to this island.

An earthquake, meteor, tsunami, volcanic eruption, or magical beast could have caused this.

Option #3 End of the world.

I think the sun is actually supposed to get colder as it gets older but a decaying orbit might draw the planet closer to the sun. This would result in storms, heat waves, unpredictable weather and general chaos. Wouldn't likely spare the other islands though.

Not the answer you're looking for? Browse other questions tagged climate deserts or ask your own question.

9
Are my deserts accurately positioned?
8
Rocky desert or Sand desert - Which would appear in this scenario?
2
Would a temperate “land of the midnight sun” be habitable?
5
Antarctic Climate on Greenhouse Earth
5
Where should I place mountains and deserts in this generated map?
1
How can I keep an area next to a mountain range from being a desert?
5
What would the climate of a planetwide city be like?
2
Does my climate map work?
3
Could an island on Earth with these climate types exist?
3
Could a population lemurs evolve to suite colder climates and fill the niche or similar niche of squirrels?