Is it realistic to assume that globalization and technology could cause a united earth government in the far future? [closed]

I was creating a description/backstory for my custom human empire in the 4x game Stellaris. I wanted it to be as believable and realistic as possible. However, every time I started to write it, I would end up using tons of scifi cliches and it just didn't sound great, I was also worried the custom empire I was making for my friends and I just wasn't very realistic, so I decided to post here and get some varied opinions.

I also plan to use this info for a forum RP game.

Could Globalization and Improving technology result in an eventual United Earth Government? Or is national sovereignty considered too important?

Thanks in advance for any answers. I hope there are some ways this could realisticly happen. I need it for my story to work but I just dont see it happening plausibly, which is important to me.

Please also keep in mind the wishlist is optional. 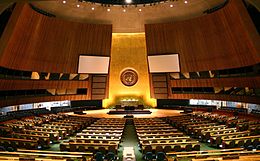 Utopian way: humans mature and realize that wars and fighting are creating more bad than good outcomes and decide do unite to liquidate health, food and standards of living differences.

Dystopia: Due to daunting resources countries fight war with each other while one that have access to space travel have no problem in surviving and dominating other by weapon or economic means.

Middle way: countries unite into different unions. American one, European, African, Asian. On the discovery and development of star explorations they unite (in different alliances) to build and use ships together. As people realize that politics between humans are pointless the government is made of corporations elected by people. Between them they decide to hire or train people acting as politicians in dealings with other species.

A popular one in a lot of military sci-fi:

The Discovery of a Hostile Alien Race

I don't necessarily know how realistic it is (we're a fractious bunch) but generally in science fiction (and some fantasy works), the thing that unites us all is someone else threatening us.

If nothing else, it makes diplomacy more expedient. Small nations threatening to ignite regional conflicts would likely have their bluffs called by superpowers as part of the knitting-together of global military forces to oppose the enemy. Any nation not doing its part doesn't get its interstellar convoys protected by the United Earth fleet. And a variety of other carrots and sticks.

This one's popular too - something happens that threatens the entire Earth. Maybe it's a zombie outbreak, maybe it's an incoming meteor, maybe someone blew up the moon - the Earth is threatened, but not by aliens.

The whole world's resources are needed to fight the threat, and so the foundation for a world government is forged out of necessity. When it successfully saves the planet, momentum keeps it around.

Alternately, the bad thing can already have happened. Major nuclear war, plague outbreak, warring genetic supermen - cities lie in ruins, and only one major world power emerges in any sort of good condition. Hegemony, in the name of rebuilding the planet, quickly follows. This is generally not a utopian one-world-government, but a world under a dictator is still a one-world government. Some time after its founding, a genuinely benevolent dictator sets the stage for a transition to elected officials replacing the hereditary positions established by his predecessors.

An AI will control all of us under one rule - whoever disobeys will be killed by AI robots.

This AI can track every human on earth, wherever there they are... everybody is under one rule and follows the rules laid by the AI.

The simple rules of the AI are for our own benefits of the human society, for example rules like:

I think it's highly improbable that one event, or even several ones, are enough to bring all the countries in the world to unite. This kind of things are more the result of forces (economical, social, political, probably all of them at once) applied for a very long time. In any case, there's only to ways to do it:

I think the second approach is both more probable and more stable in the long term, even if it looks more complicated. Think of an ever-expanding European Union until every country in the world joins the community.

Not the answer you're looking for? Browse other questions tagged reality-check warfare space earth geopolitics .

3
What future technology could make it realistic for humans live most of their lives in space?
22
How realistic/unrealistic is the trope of "The Earth that Was"?
4
What are some examples of minerals that Earth might require in the future from space?
24
What are some plausible factors and societal changes that could result in a modern civil war in the United States?
29
How could humans reach distant stars and still stay as a united government if you can't use faster than light travel