What would the Total Eclipse look like on a planet with rings?

The recent total eclipse, got me thinking about how it would look in my world.

I have a earth-sized planet with a ring system, a couple of small moons and 1 or 2 bigger moons.

How would a planetary ring system affect the viewing of the total eclipse of any one of these moons:

I'm thinking there must be some interference of some sort:

I'm not looking for an artistist depiction (although if you have any handy graphics, please feel free to share) but a basic written description of the sort of differences one would see.

Since the availability of real photos are limited, I have taken a few screenshots from SpaceEngine, whose rendering and visualization I find to be pretty good.

Here is a shot of Titans shadow falling onto Saturn. Titan (just like the majority of Saturns moons) orbits within Saturns ring plane. The eclipse zone on the 'surface' of Saturn will most commonly lie along the intersection of Saturns orbital plane, and the ring plane, so the shadow will commonly lie across the rings as shown. The shadow from highly eccentric and/or remoter moons may miss the ring plane, as shown in the photo in the other answer.

From the surface of saturn, in the center of the shadow, it looks like this: 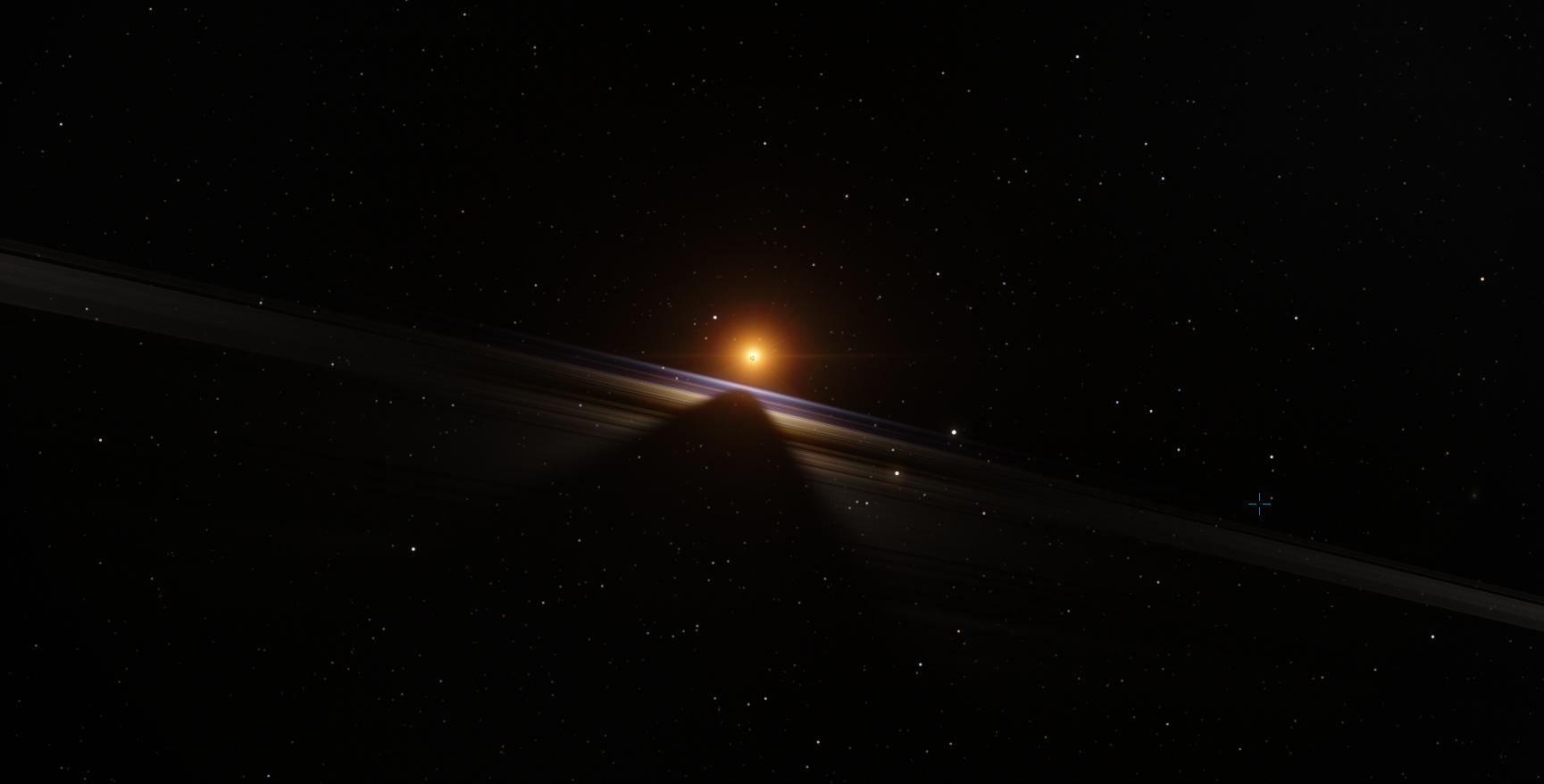 I'm not entirely convinced SpaceEngine is rendering the occuluded glare around the sun correctly. The center of the shadow is a tiny bit above the ring plane in the first screenshot, but in the second, the eclipse seems visible from much higher latitude. I think this is a more realistic visualization of the ring illumination when located at the center of the shadow, but of curse, the sun glare here should be obscured:

If I move the camera further out, inside the shadow cone, towards Titan, I need to be far beyhond the rings before titan fully eclipses the sun in SpaceEngine. I don't know what the relative size of Titan and the Sun are from Saturns surface, but it should be easy enough to calculate. 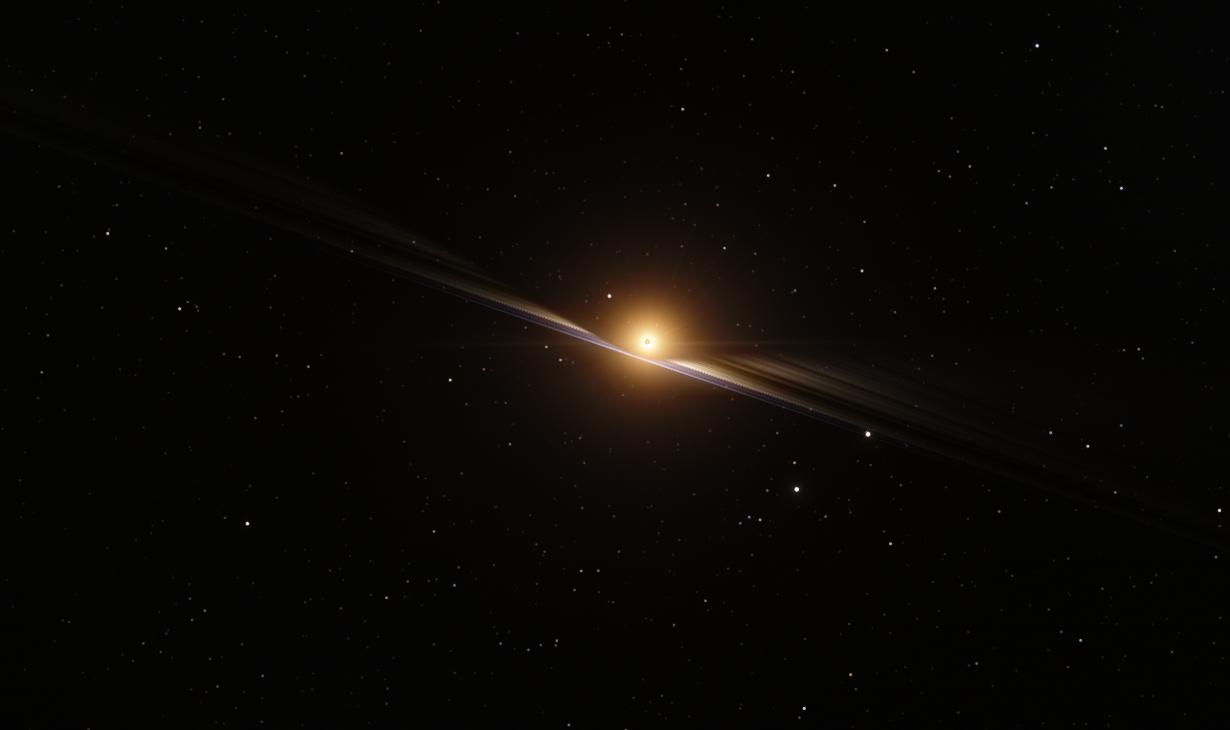 Here is a dramatic shot taken from a higher latitude, a bit outside the zone of totality: 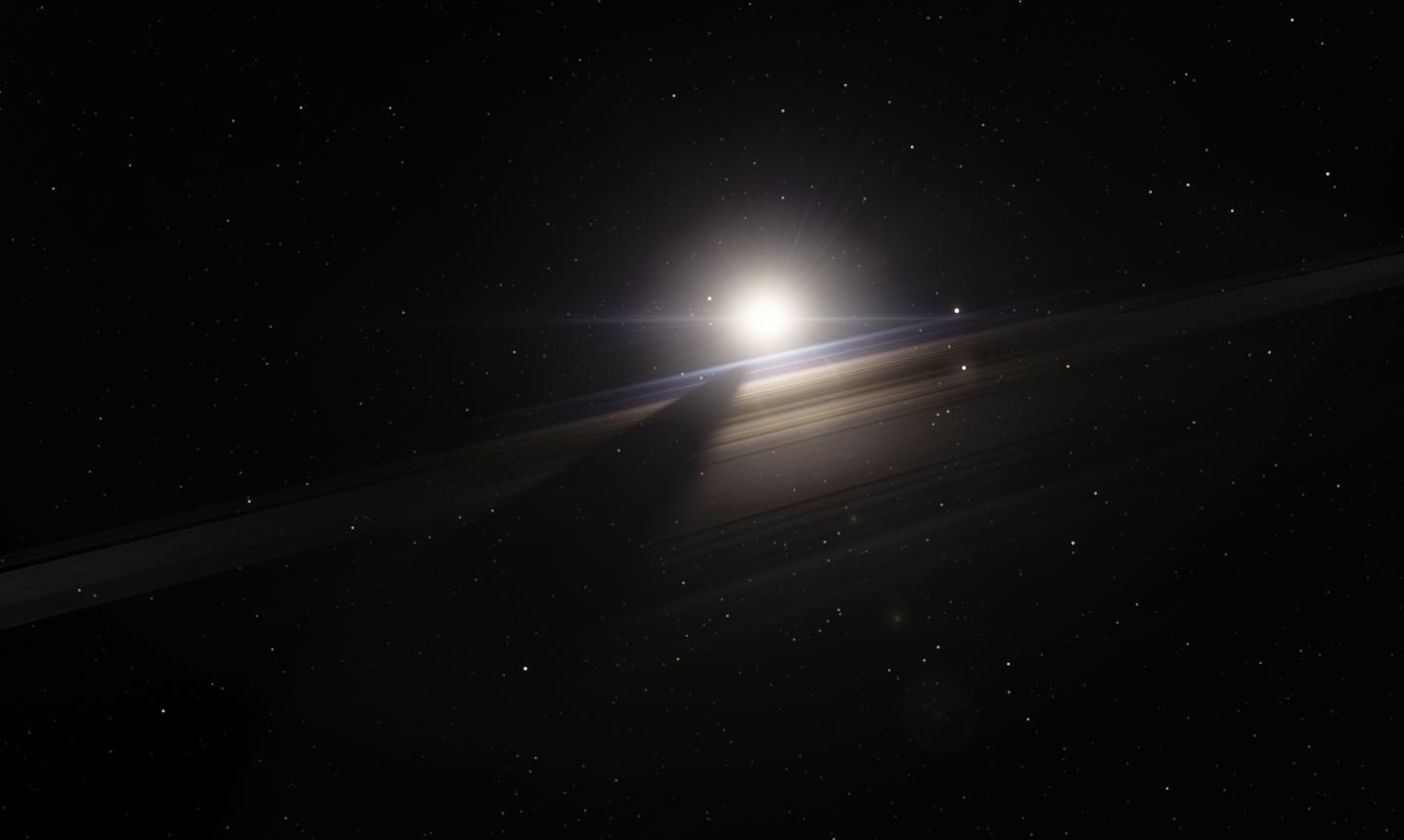 And a shot from close to the pole, with Titans position marked: 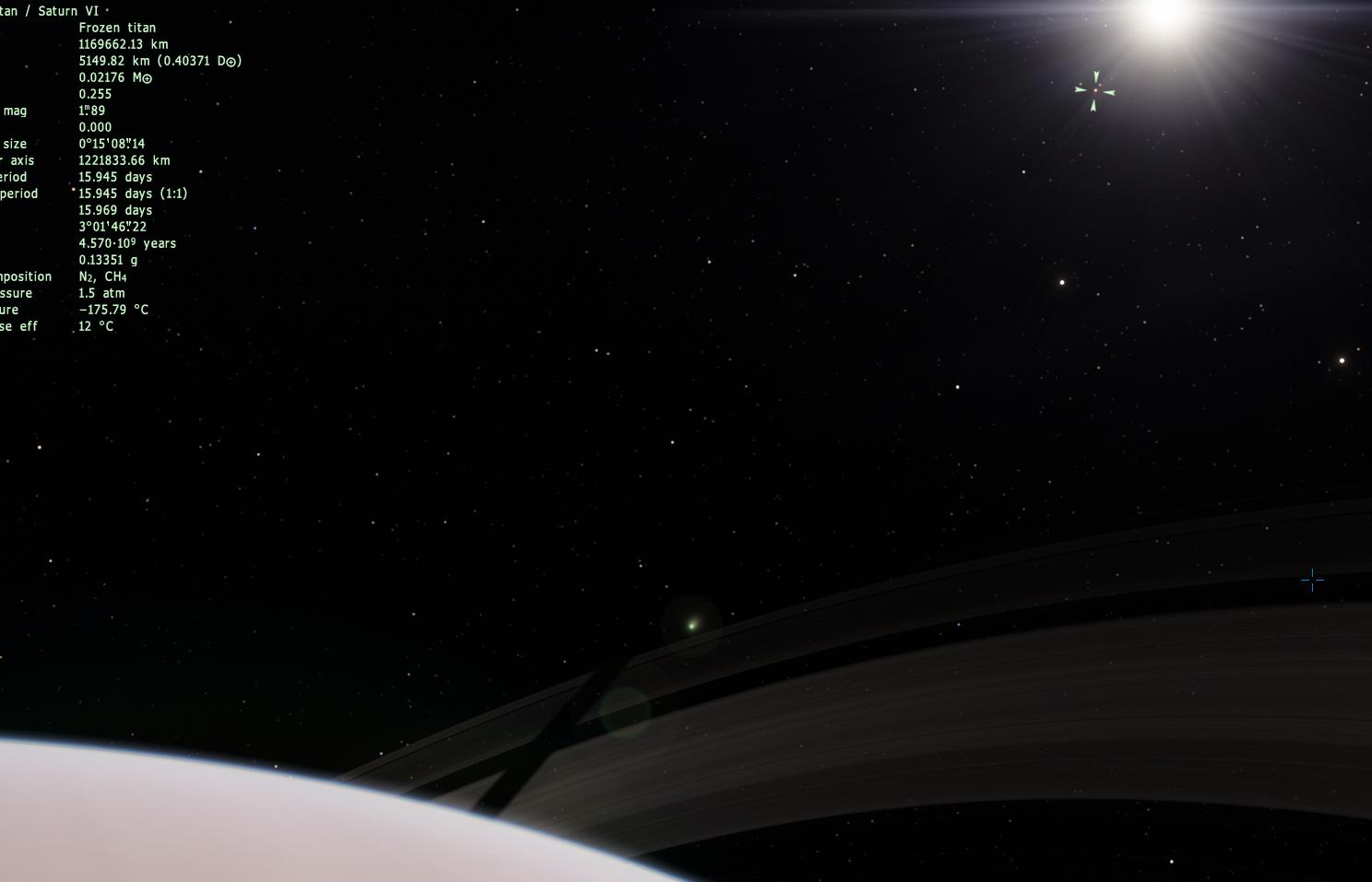 Screenshots are taken from the free http://spaceengine.org program. Titans shadow on Saturns rings is one of the preset scenarios if you want to explore some more.

First of all, realize that the rings themselves cast their own shadow on the planet. Here is a photo of Saturn during a time that the sun is at a rather oblique angle. 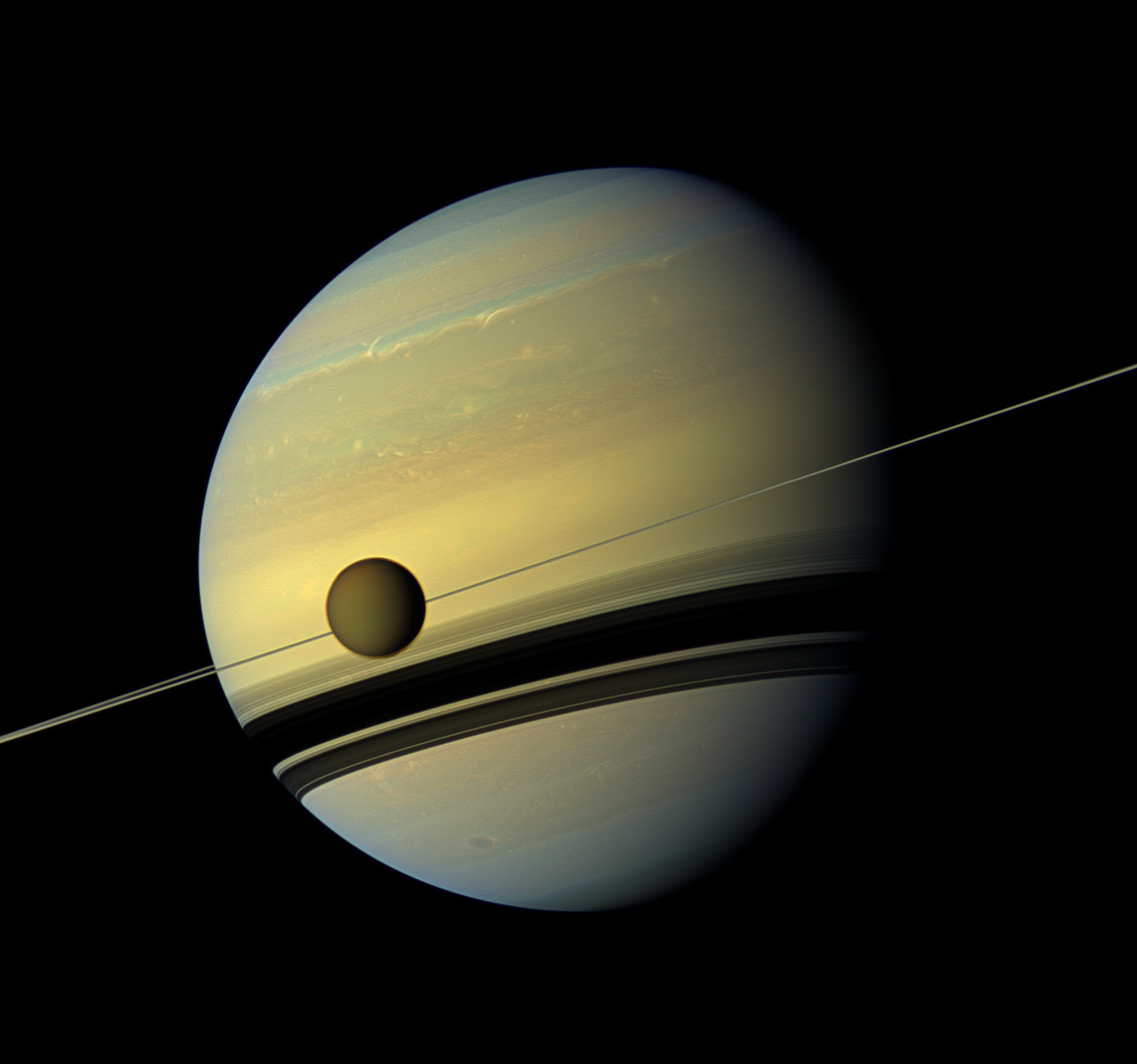 If you live in those shadows the sun appears obscured by the rings. The shadows are constant, but the effects at any one spot on the planet within tens of degrees of latitude (depending on the tilt) are going to be a seasonal occurrence. By that, I mean that the shadow starts as a rather fine line (as wide as the ring system) at the equator, sweeps northward to a northernmost position then back southward through the equator to a southern most position and then back to the equator again all within the period of one of the planet's years.

In this photo, a moon (I'm not sure which) is in the foreground but the sun is too oblique for it to cast a shadow on the planet.

Here is another photo with more direct (less oblique) sunlight: 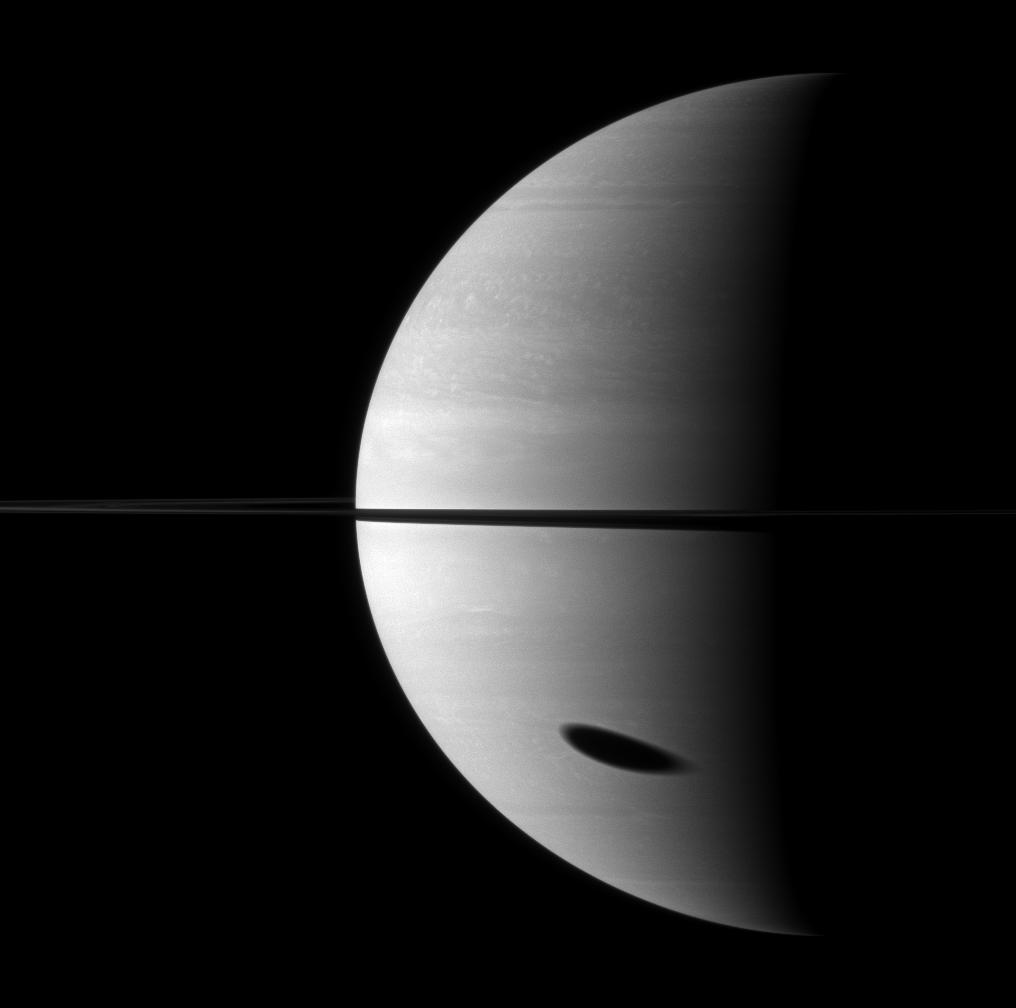 In this photo, you can clearly see there is a shadow from a moon. If you were in that shadow you would, of course, experience an eclipse, but it is outside the shadow of the rings because the moon is quite a way outside the ring system, and hence there is no interaction of rings with the eclipse because they are in different parts of the sky.

Now, there are moons that are within the ring system, or rather their orbits lie within gaps in the ring system. There could be times where the sun is obscured by both a moon and rings at the same time. Certainly, there would be an opportunity for some very spectacular eclipses.

Not the answer you're looking for? Browse other questions tagged moons planetary-rings eclipses or ask your own question.

13
Does a planet's axial tilt and seasonal progression affect a planetary-ring system, as seen from the planet surface?
20
What would the sky look like in the SHADOW of planetary rings?
0
Planet with two moons and rings? Is it possible?
10
Effects of regular prolonged eclipses on environment
5
Could 2 eclipses be visible simultaneously in the same area?
2
What If Earth Had an Equatorial Ridge
11
How can I tell what my ringed planet will look like from the surface?
9
Ringed Planet: The shadow's effect on fauna
11
What factors affect how many moons a planet can have?
4
What would a Haumea-shaped Moon look like from Earth?