How would one write languages based in sounds not typical of human dialects?

In my world, I have considered the possibility of making the "god's language" that enables spellcrafting/magic rather atypical of human languages, and have considered sound effects being the basis for the language, kinda like what beat-boxers do. Are there examples of how to write something like this, or how characters would speak it in writing? If not are there any good writing devices I can use?

Your main reference is the International Phonetic Alphabet

The IPA is designed to represent only those qualities of speech that are part of oral language: phones, phonemes, intonation and the separation of words and syllables

There you can find also the proper translitteration for, i.e., clicks

Clicks have traditionally been described as double articulation of a forward 'release' and a rear 'accompaniment', with the click letters representing only the release. Therefore, all clicks require two letters for proper notation.

If the sound you have in mind is totally out of the human language, you make up your own symbol.

Maybe it would be a good question for writers SE, but anyway, here's my two cents.

You can play this in a number of way. The first, obvious one, is: create your own magic language. A classic example is elvish/dwarwish language in Tolkien's Lord of the Ring. It doesn't matter if your language is composed solely of sounds effects: you can find ways to write each sound down into a set syllables. For example, you could say that the basic "spitting" sound is written with a csh, while the "hissing" sound is a tsz. Syllables will eventually form magic words that your wizards can use.

Most fantasy writers have done this for their foreign languages in their novels ... with various degree of success.

Idea two is: find yourself some kind of incomprehensible, alien looking font - give a look at dafont.com for example - and use that as a device to represent your sounds or your entire language. It can be a good way for some aspects, but its kind of a cheap solution imho.

Lastly, you can totally avoid giving a translitteration for your sounds, and just describe them. For example, if a spell is made up by a low, humming series of beat-boxing, you can describe it in your novel using the appropriate wording. Since sounds are so important, it could be a good narrative device and make your story more interesting (rather than throwing symbols at your reader).

The way I see it, all three options have pros and cons, but I'd go with the third.

Wikipedia lists quite a few phonetic alphabets. Of those, the International Phonetic Alphabet (IPA) is probably the most useful. 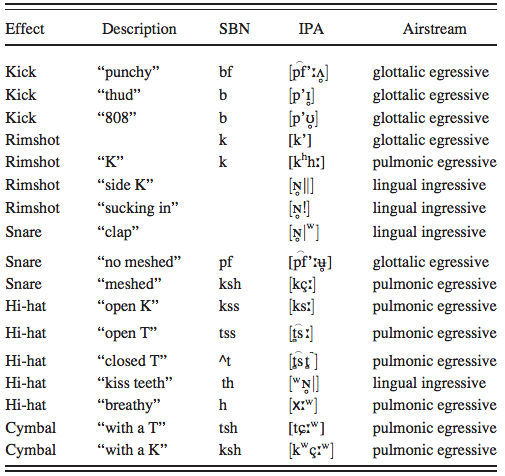 However, some sounds are not represented in the IPA, either because they aren't in the alphabet (yet?) for whatever reason (IPA is updated with new symbols as needed) or because they are deemed to be impossible to articulate (there's a nice explanation of that here). This doesn't help you writing it, but it may give you a better idea what sounds can't be found in human languages:

It is unclear from your question if rhythm/pitch is part of the "language" or just the sounds.

If just the sounds are needed then some kind of augmented phonetic would be enough.

Otherwise you should get something similar to Percussion Notation exchanging "normal" (drum) notations with your sound ones.

Check out the development of the Klingon language. https://en.wikipedia.org/wiki/Klingon_language

In addition to some of the suggestions above, potentially have a look at the Xhosa language; it has click consonants not used in Western languages. Christian missionaries developed a written system for the phonemes, so that process/the results might be useful. (http://www.omniglot.com/writing/xhosa.htm)

5
What are the advantages/disadvantages for building a constructed language versus modifying an existing language?
11
Can a single language have two separate dialects spoken in a single location?
28
How to share knowledge to a future human civilization who doesn't know our languages?
7
How fast can a species communicate using only tapping?
8
How does one approach phonology notation for a non-human constructed language?
20
Justifications for a language learned via magical transference?
44
How to avoid the language barrier when there is no time to learn the other language?
24
Would a primitive species be able to learn English from reading books alone?
11
Reasons to not use the “Language of Magic” as a common language