What I am imagining is some sort of gargantuan beast that encloses a star with its monstrous jaws and then feeds off the rays released by the sun to power itself.

What adaptations would it need in order to survive in space and its star-eating lifestyle, and how would it travel?

I am aware though that such a large creature poses equally large problems regarding its function and its survival, but it's nothing a light sprinkling of handwavium and help from world building users can't fix.

I propose a being that needs gravitational waves to survive. The being is a star (black hole, whatever) that has millions of wormholes terminated above its surface. The other ends of the wormholes travel light years to space until they find a proper source of gravity such as another star. The wormholes are such that the other star gets sucked in. As long as feeding takes place, gravitational waves are produced and your being is happy.

Sometimes, a larger celestial body gets your being turned inside out through its own wormholes, which is terribly painful, and causes serious psychotic breaks. These end with other stars being devoured.

Edit: some thoughts about how such being would exist. To make a wormhole, you need a dense kind of matter with negative energy relative to the vacuum. It is not known if such thing could exist. The being in question could be made of this type of negative matter, plus normal matter.

Normal matter is made of electrons and nuclei held together by electrostatic forces. Since the negative matter and normal matter would repel each other, it is hard to make a mixed atom. But, you could make a mixed system similar to a ionic crystal, in which the positive ions are particles of normal matter, while the negative ions are particles of negative matter. That mixed part of your being would have a zero gravitational footprint as its density is close to that of the vacuum.

Although your being might have zero mass, it can still get attached to celestial bodies, if its mass has a total dipole. Dipole means that overall, your being can be imagined as two centers of positive and negative mass slightly separated from each other. This is similar to what ferroelectric materials are: crystals with long range order in which positive charge centers are slightly displaced from the negative charge centers.

The positive mass attached to your being should have a larger mass than the wormhole, so there would still be attraction between it and the stars to be consumed.

When a star falls through the wormhole and tries to circle your being in order to fall on your being's celestial body companion, is should generate gravitational waves. If this process is violent enough, the gravitons could generate pairs of negative and positive particles. These pairs could be adsorbed to the surface of your being, effectively helping it to grow itself, similarly to the way you grow crystals by beam epitaxy. You could also split the vacuum to generate negative matter for the wormholes.

If the celestial body to be devoured at the other end is too big, I can't see why your being plus star companion couldn't be forced through its own wormhole. In fact, I think you would also have wormholes going through that wormhole, but I don't want to think how that would work out.

As far as intelligence goes, you can assign your creature any intelligence level, but probably it wouldn't need to be too smart if it doesn't seem to have competitors. So, the psychotic breaks would be a personal touch. Otherwise, your creature would only "think" when there gravitational waves are strong enough to disturb its structure, as it happens during feeding.

Do not, I repeat DO NOT freak out about this, but there are creatures known by Mankind that feed off the rays from stars. Governments around the world try to surpress this knowledge in the wider population, but I have seen some speculation online claiming these Things are called "Plants".

OK, jokes aside, this is an interesting Question. I assume that something this big, if it is not collapsing under is own gravity, would most likely function like a Jellyfish. Also a collective of highly specialised specimens, that are working together. A tough, partial mineral or metalic skin for protection, and some sort of thrusters at one end, so it can move forward.

A creature more or less like the one you describe is the co-protagonist of Fred Hoyle's The Black Cloud.

It is a denizen of deep space, that periodically manoeuvers around a star (the propulsion is a composition of lightsail and railgun jet) and forms a stable Dyson disk structure inside the Goldilocks zone, in the process light-starving any habitable planets already there, such as our Earth. The Cloud is composed of trillions of ice rocks covered with organic structures that electromagnetically interact one with another, and form a sort of distributed sentience.

Hoyle's Cloud does not shorten the chosen star's lifespan in any way, and simply lives off its light. But a sufficiently advanced Cloud might try and increase feeding efficiency by brightening the star, enlarging and pushing farther its Goldilocks zone. It could maybe do so with beams of really energetic muons to increase hydrogen-hydrogen fusion in the star and move it closer to the surface (of course it would need more efficient technologies than Earth's, or the process would be antieconomic).

If your creature exists in higher dimensions, it might be able to just pluck the star out of our own dimension, like a 3-D being can lift a 2-D being off a sheet of paper. This avoids the problems you would have with conventional physics if such an enormous creature tried to eat a star in our regular three dimensions. It would also be extremely disruptive to anything that was previously in its gravity well, like inhabited planets, which may or may not work for your story's plot.

A creature that behaves like an organic Dyson Sphere would of course be enormously titanic. It would probably resemble a vast Jellyfish and if it exists as a photosynthetic autotroph of some kind then it would not need to literally devour the star it feeds from, instead it would perhaps envelop the star with its entire physical form, absorbing a high percentage of the Star's output. Such a creature would have to be able to resist extreme temperature gradients and intense radiation. It would also presumably require a source of water, which does not exist in main sequence stars. It would also have to be extremely endurable in order to resist being inflated to bursting point by the solar wind produced by stars as it feeds.

Now, I know you said that it is unfeasible but if we combine two theoretical pieces of technology we can create a much more realistic being-

A self replicating Dyson swarm

Now first, what is a Dyson swarm? Well a Dyson swarm is a swarm of satellites that surround a star and collect it's energy output. Here is some concept art: 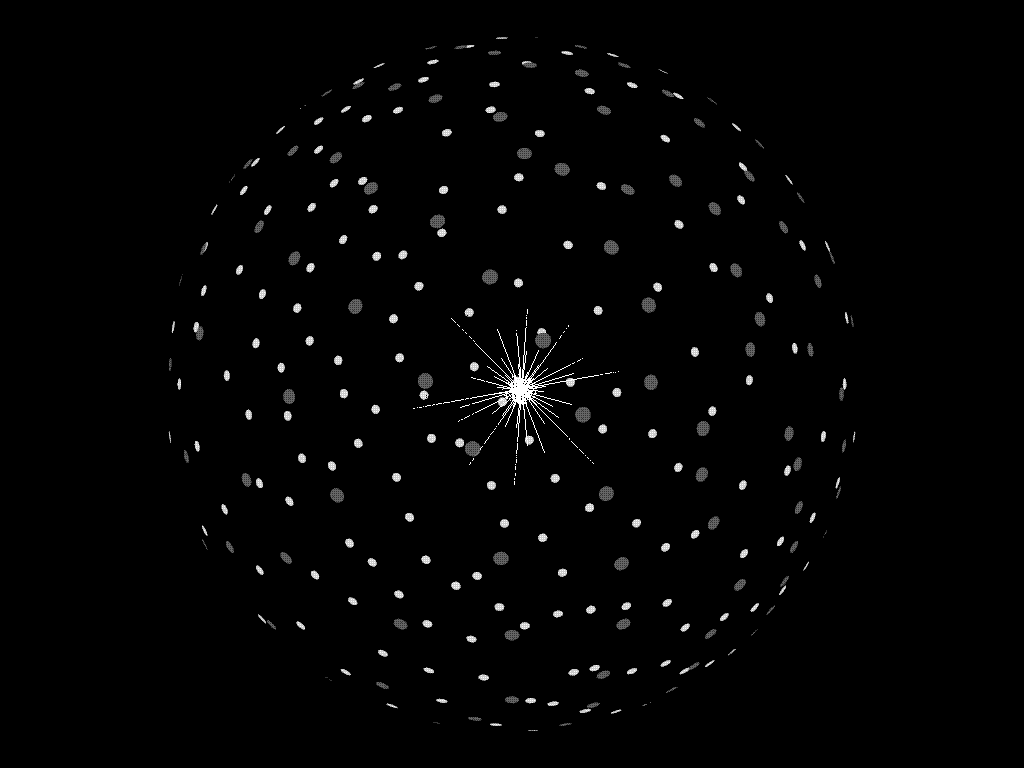 This could then be built to have control robots that mine the planets and other celestial bodies in that solar system. Whilst the robots do that it could be collecting energy from the star and charging it's batteries. The robots would also be building another copy with the material they mine. It then gives the energy it collected to it's offspring. Once fully charged The daughter swarm goes to another star and does the same thing. The parent swarm will then stay around that star until it is about to die, collecting energy, charging it's batteries and collecting deuterium (An isotope of hydrogen that has a neutron as well as a proton. if two of these atoms were merged helium would be produced. That is the concept of fusion power.) . Once the star is about to die the swarm then moves to another star. Movement is simple as each satellite would have a fusion drive.

I'll go full Lovecraft on this one.

A giant self replicating fungal organism

It could be as old as the Universe itself. Plus, in some mythologies, it could be the center of the Universe, much like Azathoth. Being such an old and awesome living being, it's constantly puffing spores to every direction.

The Universe is very, very vast, but it's pretty much empty, so the probability of a spore being ejected in a direction that will make it close enough to any star is low. These spores could be ejected at low speed, so they wouldn't had time to get close to stars much further than were this being resides. On the other hand, a mysterious void in the Universe could pinpoint the location of the mother-organism.

When one of these spores get close to a star, it begins receiving energy from it in a process similar to photosynthesis. This make the spore grow in a polyp, which in turn produces more and more spores, until the star is completed surrounded. Then, the polyps mature and begin to enclose the star, closing the gaps between them until absolutely no light escapes from the star.

From an observer, outside this, it would look like the star died, because it vanished. Instead the star would be still fully operational, but 100% of its radiated energy would be absorbed by the fungal structure.

After a star is fully enclosed in this deadly embrace, it would start producing and puffing spores by itself.

This could pose a danger for the Universe, since in a few trillion years the spores could have reached a good part of the stars.

EDIT after andrey's comment. I thought about his very valid critic, and I'll enhance my suggestion.

What we perceive as dark matter and dark energy are indirect evidences of an orthogonal universe. I'm not using the work parallel here, because if another universe is totally orthogonal to ours, the mathematical projections of their dimensions onto ours would be zilch, hence we wouldn't perceive it. However, its mass and energy would affect our cosmos, hence the dark matter and dark energy.

These fungal organisms could be pandimensional beings, which exist in several different ortoghonal universes. I do understand the problem of the blackbody radiation and the source of matter for the spore-to-polyp evolution, and I propose the creature to funnel matter and energy between universes. Then, from an outside observer, the star would seem to be devoured, and there would be no blackbody radiation, since all of the absorbed energy would be funneled to another universe, in exchange for matter to grow more spores.

This way this pandimensional fungus would still conserve matter and energy, but not on a local single-cosmos-wise system. It could act as, for example, an organic Dyson sphere from an even higher civilization that learned how to control this organism. They would seed these fungus on several universes and let them evolve, so whenever the spores find a star and began their transformation into an organic Dyson sphere, they harness this energy.

I guess I went a bit too wild on this one, but I got truly excited on this idea!

Not the answer you're looking for? Browse other questions tagged biology creature-design science-fiction space-travel or ask your own question.

41
Multiple DNA, one creature
8
Color-changing armored creature?
37
Creature that swims in the solid ground
3
Considerations for venturing near a neutron star
5
Creature Design Challenge- Extreme Gravity Flying Vertebrate
17
What would a biological creature need in order to see into the future?
24
What organs or modifications would be needed for a life biological creature not to require sleep?
3
is it biologically possible for a creature that can be compatible to reproduce with any creature?