Can a 2D object living in a shadow be examined in a 3D world?

In Doctor Who's Silence in the Library the Vashta Nerada, a carnivorous alien species that exists on every planet, exists in darkness and shadow, including the shadow a person casts standing in a room. Not surprisingly, the episode does not show any Vashta Nerada, but that's part of the magic.

Were my world to be inhabited by such creatures, would they be visible to non-remote scrutiny?

How would you personally investigate a 2D phenomena that, because of your own shadow (expression of yourself in a 2D world), threatens you?

I don't think this is a particularly good answer, but I am playing with the idea trying to make it into something which makes sense to me (apologies if it doesn't work for others)

Can a 2D lifeform have mass?

Normally, I would have said not, however this 2D lifeform certainly has a 3D presence, because it can consume 3D food, so that mass must go somewhere.

We are looking for a shadow that has weight. Maybe not a lot of weight, because it must have some way of dispersing the mass it consumes, but that mass must have gone somewhere, but where?

I do not think that this is a 2D lifeform. I think this is a 3D lifeform, but only 2 of those dimensions agree with our 3 dimensions - the other one is at right angles to our 3rd dimension. Possibly there is no light, as we know it, in their 3D world which is why they are expressed as shadows in ours.

This means that the Vashda Nerada will be encoutering us as 2D objects and somehow converting us into 3D objects of their native type preserving mass but not dimensional orientation.

From the point of view of safe investigation, I would try very very hard to cast no shadow - lots of lights on me.

From the point of view of investigating the Vashda Nerada, especially in a quantative way, I would be feeding shadows and weighing them and monitoring small variations.

Step one: get a glowing jumpsuit that glows so bright you have no shadow.

Step two: get a long glowing pole, with a not glowing circle on the end of it, and a string hanging down from the middle. It sort of looks like a giant paddle ball thing with a long, glowing handle.

Step three: Tie something the Vashta nerada would eat, like a rabbit or mouse to the string. 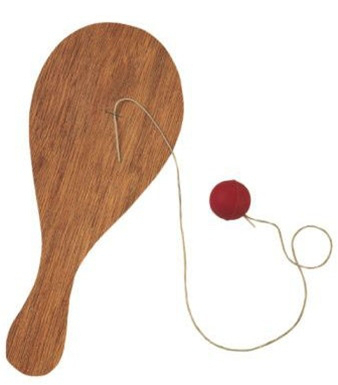 The red ball is a mouse. This reminds me of looney toons or something.

Step four: Hold pole in front of you, bait will be in shadow and be eaten, and you can observe, because you have no shadow because you are glowing.

I remember that the doctor mentioned on that episode, these creatures are the house dust hit by sun ray but only alive on the dark, I think they can't live on 2D space, they are microscopic 3D creatures that hate light.

So if an object have a shadow, lets say a sphere, this shadow is a kind of tube. Other near sphere will not have the shadow connected on the ground but on the entire 3D space, so the creatures can spread. When the sphere is far apart, the shadow simply do not touch each other, is there a light wall blocking the spread of the vashta neranda, they will just die if cross the light wall.

The existence of these creatures is scientifically ill-defined, but under rather-generous assumptions which might enable their existence, the answer is an unequivocal "yes".

Like much else from the fantasy Doctor Who (which pretends to be, and is sometimes regarded as, "science fiction"), the "science" of things-that-live-in-shadow really isn't, but you tagged this science, so I have to do my best. There's a continuum here with science-based, and in-particular, we need to discuss the scientific properties of the Vashta Nerada before we can talk about how to scientifically observe them.

First, your assumption that the Vashta Nerada must be 2D is incorrect.

To respond to your first numbered item:

However, the darkest parts of objects are usually their back-facing surfaces or crevices. E.g., the undersides of a table, not the floor underneath it. So, while these regions are not 2D, we expect to find the Vashta Nerada squeezed inside them.

Second, the larger issue is that what you mean by "shadow" is poorly defined.

In reality, everything is a light source (that's how your eyes work, after all, by absorbing light from them). Your pants are a light source, lighting up the room with pants-colored light.

(If you think there is some difference between an object reflecting light versus an object emitting light (there isn't; the photons don't care), consider that every single atom in the whole universe emits some light.)

The idea of a "shadow" is really just an anthropocentric way to describe the path-length-1 occlusion of a particularly bright light source—and, because of this, nothing is truly "dark" in a physical sense, and few things are "dark" even in a visible-light sense. Consider that you can still make out the carpet inside your shadow, and that you are not peering into a seemingly infinite abyss blacker than space itself.

The properties here are really quite fantastic. Presuming that creatures like this exist, they must be able to anticipate where shadows will be, teleport as shadows are created or destroyed, and shrink or grow to adapt to shadow changes. Therefore, they must be quantum energy be—(nope, I'm sorry, you do the handwavium).

Pre-cognitive self-teleportation is effectively a god-power, for reasons that should be obvious, so we have to nerf it. Say, make them just really, really fast. They can also abide some light, or else they couldn't exist at all, let alone hunt inside everyday shadows.

Since size-change is hard to do without violating Physics, having them small in the first place is obvious. Maybe rodent- or grasshopper-sized. Which of-course makes them likely less-threatening to humans. Maybe they can poison you, but they're less likely to be able to outright eat you whole.

Now that we've placed some limits on what the Vashta Nerada are, we can start to reason about how to observe them.

And the answer turns out to be really simple. Observing a Vashta Nerada is as easy as looking toward it. All shadows contain some light; for most shadows this is even visible light. Since true super-absorbers do not exist, the Vashta Nerada must reflect some light, which you could then see. Q.E.D.

For more creative approaches, try trapping one. Entice it into a nice, dark metal flask. Then close it up and turn on an interior light. This procedure happens so often in industry that it's astonishing we've never seen one before.

Or lure it into your car and drive it to Bonneville Salt Flats before sunrise. Or make a shadow under a cardboard box, then set the box on fire—instant fried Nerada, ready for dissection.

If I were actually imperiled by such a creature, I might head outdoors. If it's a cloudy day, I won't cast a shadow (or, more accurately, the proximate light source is the gray sky, not the Sun, so my shadow is diffuse enough that it appears nearly light). The Vashta Nerada would be forced to remain in the building, which I would subsequently nuke from orbit.

We live in a 4-D universe, everything in it possesses length, width, height and duration. So, you want to change our universe so that some hypothetical zero-thickness structures (living beings, no less!) can exist.

This would require a profound modification to our Physical Laws. I've zero idea how to do that - how to change them so that they would continue to be consistent AND allow for both 2D and 3D things to exist (as they travel through time).

If, as you claim, such beings exist only in shadow (what does that mean?) There's no object which isn't in some light source's shadow, so perhaps you mean a shadow visible to the average human eye in the given lighting conditions. Well, that's a real problem. Take an object sitting on a table under normal lighting. It casts a shadow. Now get a high intensity light, shine it from a different direction, and do not block the normal lighting with the light source. You have created a shadow but the object continues to cast a shadow from the normal light, yet it may not be visible due to the high intensity lighting shining on that surface.

So, what rules do these 2D beings follow where can they exist and where can't they? I have no idea. The problem lies with the assumption that a shadow is "dark", but I've explained why that's not necessarily true. (Unless we agree that "dark" is just a measure of relative light intensity.)

How would I investigate such beings? I'd use the appropriate tools, machines, and measuring apparatuses. What those would be can't be described since they don't exist in our world (nothing is purely 2D here).

A couple possibilities, the first is that it would actually be fairly easy to see a 2D object if one were to exist. While a 2D object turned sideways so that you were facing the nonexistent dimension would seem invisible, any tilt would cause the flat surface to be visible. If the object was large enough or you used a precise enough camera, then being out of alignment with the nonexistent dimension by mere fractions of a degree would make it visible. The further out of alignment you get the larger the 2D object will appear. 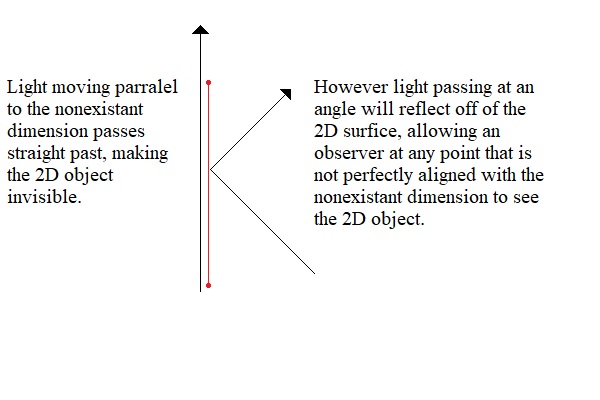 Not the answer you're looking for? Browse other questions tagged science-in-society 2d or ask your own question.

5
How would a civilization of cave-dwelling cats track dates?
5
Scientifically Plausible Vashta Nerada?

5
How can a flat sheet of cells develop complexity and even intelligence?
2
How would living underground (bioluminescence) affect a humanoid race?
5
Would there be anything preventing a world where humans get energy by photosynthesis?