Would a temperate "land of the midnight sun" be habitable?

This is another question about PommeDeTerra:

Thanks to the orientation and position of the planet, PommeDeTerra has a habitable island with a temperate climate at it's south pole that looks a little like this: 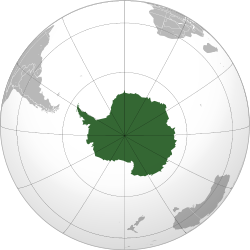 This island is very similar to Europe with the same soil types, geographical formations, flora, and wildlife. The planet has no tilt on its rotation axis, so the sun never sets and seems to fly in circles along the horizon. (I'm not interested in the effects of this in this question.)

It has become evident that having having no tilt on the rotation axis is a very bad idea. Due to this, I have decided to give it an earth-like rotation axis. This may cause some massive changes to the conditions that my TemperateAntarctic-PommeDeTerrans live in, but what are they?

First of all, we now have a continent which has permanent sun in summer, and full darkness in winter. The average yearly temperate is the same as, say, Germany or France, but due to the sunlight changes it will have hot summers and cold winters.

My question is: How hot and how cold? Will the island still be habitable?

What will the climate be like and what types of weather should I expect in summer and winter? I'm particularly interested in how the plantlife and temperature will be affected by the several months straight of sunlight and darkness each year.

I'm not too bothered about the rest of the world (it can be inhospitable desert if needed), I just want to acheive a temperate(ish) climate at the poles.

I don't know about your hypothetical planet, but we have some hard evidence there was a period (about 100 millions years ago) when our Antarctica was covered with rainforests.

It may be hard to believe, but Antarctica was once covered in towering forests.

One hundred million years ago, the Earth was in the grip of an extreme Greenhouse Effect.

The polar ice caps had all but melted; in the south, rainforests inhabited by dinosaurs existed in their place.

These Antarctic ecosystems were adapted to the long months of winter darkness that occur at the poles, and were truly bizarre.

So I believe that, given enough warmth, it would be possible.

Note that the conditions in Cretaceous were particularly adapt because a higher greenhouse effect helped keeping warmth even through the "long nights", while a higher temperature due to closer proximity to star would have meant higher differences between "day" and "night".

You can have a temperate climate around your pole with a tilt. It's actually what we are heading toward : our South Pole's ice is melting, guess what's next ?

There are several ways to obtain the result you want, the difference being what you want the rest of the world to look like :

These are the most valid points I see at the moment, and maybe a wise way of thinking could involve a subtle association of several of them, as you see fit.

Regarding climate itself, and more particularily the weather(s) coming from it, I understand that you are worried about ranges of temperatures, especially the difference between day/Summer and night/Winter.

Water current are powerful temperature bending powers, since water is a very effective at storing heat. Without even mentioning current, littoral areas have thiner difference between day and night and between Summer and Winter. The seas is heated by the Sun during the day and that heat escapes into the air during the night. The same way, the sea reaches its maximum temperature of the year at the end of Summer, since it's quite slow at heating, and will then lose that heat during the following months, thus heating the air.

I'm waiting for more topographic information before I can predict the different weathers found in your continent.

So, if you want to have summers with +25 C days, prepare to have long dark winters with daily temperatures around -25 C.

On the other hand, if you don't want to keep it as a single continent, ocean currents can smooth out seasons quite a lot. In Reykjavík, for example, seasonal swings are a mere 10 degrees C.

If both poles are temperate and all the space inbetween is pretty uninhabitable, you might want to consider making creatures like our Arctic tern, who migrates between the poles every year. The arctic tern has an unusual strategy of going to the small part of the Earth that is least habitable, and leaving before things get comfortable enough for predators to return. In your world, most animals with the ability to cover that kind of distance will follow the warmth, but there will likely be one that does the opposite, taking advantage of the emptiness the warmth-seekers leave behind.

If both poles are habitable, maybe there is a civilzation on both. These civilizations would be extremely isolated with regard to trade, but they could communicate with one another if they can train some of these migrating creatures to carry messages. You could have exchange of ideas without substantial exchange of goods.

Not the answer you're looking for? Browse other questions tagged climate .

16
What if an Earth-like planet had no axial tilt? (climate and technology)
13
How would living at a pole affect mapping and navigation?

7
What is the expected terrain for an arid highly eccentric Earth-like planet?
9
Temperatures in an eccentric orbit?
0
What would make a planet have 8 discernable seasons?
5
How would weather change if the distribution of land were very uneven?
3
How hot would daily highs get if it were always the summer solstice in the Northern Hemisphere?
1
how do you freeze an ocean to get a desert planet?
3
Life on a planet with little axial tilt
4
Seasonal Weather in a Forest with Polar Night