Sand grains in space - a threat?

If tiny particles of solid material (the size of sand grains, for instance) were flung into space, would they pose a danger to anything they hit?

I'm no physicist, but my understanding is that objects in space do not reach terminal velocity, and, once in motion, continue to accelerate until acted upon by another force (e.g. a gravitational pull, or colliding with something). This leads me to speculate that such tiny particles would effectively become vicious little bullets that could threaten satellites, spaceships etc.

Can someone with space knowledge confirm/refute this?

Space dust is a threat, but won't destroy a ship

In 1967, NASA's Mariner 4 spacecraft was cruising through the solar system, not far from Earth, when something unexpected happened.

"Mariner 4 ran into a cloud of space dust," says Bill Cooke of the Marshall Space Flight Center Space Environments Team. "For about 45 minutes the spacecraft experienced a shower of meteoroids more intense than any Leonid meteor storm we've ever seen on Earth." The impacts ripped away bits of insulation and temporarily changed the craft's orientation in space.

Fortunately, the damage was slight and the mission's main objective -- a flyby of Mars -- had been completed two years earlier. But it could have been worse.

"There are many uncharted dust clouds in interplanetary space. Some are probably quite dense," says Cooke. Most of these clouds are left behind by comets, others are formed when asteroids run into one another. "We only know about the ones that happen to intersect Earth's orbit and cause meteor showers such as the Perseids or Leonids." The Mariner 4 cloud was a big surprise.

"Of all NASA's Mars spacecraft, Mariner 4 was the only one we've sent with a micrometeoroid detector," he continued. During its journey to Mars and back, the detector registered occasional impacts from interplanetary dust grains -- as expected. The space between the planets is sprinkled with dust particles. They're harmless in small numbers. But when Mariner 4 encountered the cloud "the impact rate soared 10,000 fold," says Cooke.

Bear in mind that this is naturally occurring dust, travelling at a lower speed than your theoretical weaponised dust.

It is possible to weaponise sand

Sandblasting is commonly used to create holes in walls, or other very strong materials. Shooting sand at a super-high speed in space can be used very effectively if concentrated onto one point of a space object.

You're right there is no terminal velocity but the acceleration thing is not right acceleration is only caused by an unbalanced external force.

Now about those sand grains, they could be dangerous; if they were going really really fast; an impactor hitting at 100 kilometres per second (360,000 kilometres per hour (223694 miles per hour)) delivers a hit equal to about 1000 times its mass in TNT, so a 1 kilogram impactor going a 100 kilometres per second is basically a 1 kiloton bomb. Now the details of what it would take to damage or destroy a particular space craft or station are kind of out of the scope of the question but I can give you some upper limits that may help you. The maximum size for a sand grain is 2 millimetres on the longest axis, so a maximum volume of 8 cubic millimetres, the densest substance your space sand is likely to be made of is iron with density of 7.874 milligrams per cubic millimetre. So the heaviest space sand is probably on the order of 63 milligrams and at 100 kilometres per second will do the same damage as about 63 grams of TNT. Kinetic energy goes up with the square of velocity, so double the speed quadruple the damage, at 200 kilometers per second it's about a 250 gram charge.

To put these speeds in some perspective geostationary orbits are 3.1 kilometres per second and the fastest thing ever seen in our solar system was the Great Comet of 1843, a Kreutz-family comet, which reportedly passed within 0.00546 AU of the photosphere at a speed of 570 kilometres per second.

One important thing to keep in mind about this issue is that space is so big that getting hit even when passing through a "dense" cloud of particles is the exception not the norm.

As noted, once a particle is in space, it remains at whatever current velocity it has until acted upon by an outside force.

The real danger is the velocities involved in space are insanely high compared to the sorts of velocities we are familiar with. Orbit around earth requires a velocity of 7.8 km/sec, and objects can remain in the solar system at speeds of ups to 72 km/sec. Rifle bullets and tank rounds, in contrast, have velocities measured in speeds of hundreds of metres per second. In real terms this means that the kinetic energy of an object is massively magnified compared to the sorts of things we are familiar with (Ke=1/2Mv^2).

In SF terminology, this is sometimes translated into a measurement called "Ricks"

An object impacting at 3 km/sec delivers kinetic energy equal to its mass in TNT.

There is no "terminal velocity", that is a term used with air resistance (or it can apply to fluid resistance) when the amount of acceleration (due to gravity) is matched by the resistance of the medium through which something is falling; like air. Pointed objects like arrows will have a higher terminal velocity than something flat. A skydiver in "dive" position will move faster than a skydiver in "spread-eagle" flat position; their terminal velocity depends upon the amount of surface area that must push air out of the way.

However, in space, there is no resistance medium; but there is also no automatic propulsion system. Objects can be attracted by gravity, but otherwise will just continue to move at whatever speed they were moving; or continue to just sit there if there is no gravitational gradient and no initial motion. They do not automatically accelerate at all.

objects in space do not reach terminal velocity, and, once in motion, continue to accelerate until acted upon by another force

Totally wrong. According to Newton's principle, any object not subject to forces maintain its status of motion, meaning the velocity will stay the same.

Apart from this, due to the high velocity, even a sand grain would deliver enough energy in an impact to make significant damage (see here) 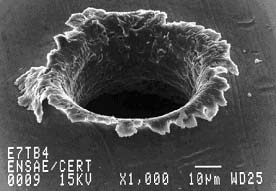 They won't continue to accelerate, they'll maintain the same velocity until something else acts upon them, but in order for them to escape the gravity of a world they'll need to reach escape velocity (for earth, 11.2 km/s). At that speed they could definitely do some damage, but how much is hard to say. I doubt it'd be anything catastrophic, but it's not something I'd throw myself in front of for fun. Grain of sand would probably do pretty minimal damage, but once you get into larger pieces then yeah, it could cause some pretty serious damage.

Not the answer you're looking for? Browse other questions tagged physics space or ask your own question.

9
Are islands flying in space possible?
2
How much can we learn from a grain of sand?
10
Is my space station feasible?
9
Outer Space Flamethrower
17
Is it possible to have a planet with sand tides on deserts?
17
Accelerating, then decelerating, without expending energy or propellant in space?
0
Deep space acceleration limits?
10
Using sound to swim through sand