How would we engineer humans for space? [closed]

Humanity is on the verge of another dark age and our best minds look to the stars for escape.

Unfortunately, a few centuries of expeditions have yielded some painful lessons on intergenerational living, the most important of which is:

We cannot live on other planets

Terraforming Mars, the “easiest” new world, proved too energy intensive to be sustainable. Even with the most effective methods and tools, the synthesis of an earth-like biosphere remains orders-of-magnitudes beyond our industrial capacity.

On a smaller scale, the interconnected habitats of once-"settled" planets have torn themselves to pieces. Expansion beyond the initial thrust of colonization is met with consistent failure: tools manufactured cheaply on earth break routinely, resource mining, refinement, transportation are prohibitively expensive, and a single accident can portend casualties in the thousands.

Faced with unending attrition, some colonies adopt rigid social systems that eventually strangle their development. In less-stable societies even, successive generation of colonists will exterminate the preceding for their living space and rations. In all cases: stagnation followed by self-destruction.

And this is only the small percentage of planets thats exist in "habitable” zones of solar systems within range of our flimsy starships.

Unlike Earth's "Mother Nature" that was amenable to our coming-of-age, the alien natures that we intended to tame, have instead rejected us. Thoroughly. They have bankrupted major nations, caused strife, enervated scientists and philosophers alike, and seeded a strange anguish:

We will end on Earth

No matter in one millennia or a thousand, the species Homo Sapiens will die on this pale blue dot. That is certain.

But— the question arises, if the bottleneck is man, — what if we can make a new species of man, of the genus Homo, more suited for space?

One that can thrive not just for a lifetime, but for eons to come, as its parents once did on Earth?

One that could survive in the vacuum of space? Or any planet it desires? Or one that breeds children that adapt more readily to impossible environs?

Will this being have its primate instincts corrected? Expunged? Enhanced? Will it feel the way we feel? Think the way we think? Will it still be at its essence, a human being?

How will you continue the descent — and ascent — of man?

Note: I am not a physicist, mathematician, scientist, astrologer. or psychohistorian. So please correct the errors in my thinking.

Also, for fun, what name would you give those picking up our baton?

Man (or any other Earth life-form) cannot live in the vacuum of space. We are fueled by chemical reactions and in space there's nothing to eat or breathe.

We (perhaps) could be made to survive, for short periods, to vacuum, but that is probably not worth the effort. The array of adverse reactions (see here) is rather long and deeply ingrained with our physiology. Making us hard enough to resist those conditions would also prevent us to function in normal conditions... unless a complete rebuild is envisioned (as suggested by @HenryTaylor), but then I think a completely "artificial" android vessel for our nervous system would be easier, but that would be not much different from wearing always some form of "power suit" (something like the aliens in "Independence Day").

Real problem is we are not something that can live autonomously, in spite of what we like to think. We are part of a complete ecosystem we need to preserve if we want to stay alive and in reasonably good health.

We need to ingest varying amounts of Essential nutrients we are unable to synthesize, but that could be fixed adding back long lost synthesis capabilities to this "homo universalis". This won't, however, dispense us with the need to eat "complex" foods containing, at the very least, the three Macronutrients, minerals and water.

Here is the problem on feeding on other planets: their biochemistry, even if "similar" will likely be somewhat different from ours and thus we won't be able to feed on this (it would suffice a "simple" change from D-carbohydrates to L-carbohydrates to render them completely useless). This means we will need to take (at least) some of our vegetal and animal "neighbors" with us in our travels.

Adapting to "eat whatever" is really not thinkable in any reasonable future.

The "obvious" fix for this would be to "integrate", somehow, also some plant functions thus enabling us to synthesize everything we need from inorganic materials; unfortunately the conversion is rather inefficient and that's the reason plants have large sun-catching surfaces and tend to limit movement to a "bare minimum" to use all energy to grow and reproduce (often with help of energy wasting animals).

With a great deal of handwaving you could substitute beta-carotenoids (which capture energy photons of wavelength unsuited for chlorophyll and provide needed excitation) with some other compound using some other energy form (electric?) to perform the same function without needing that much sunbathed surface.

This is the best I can think of along the lines you wanted: a hybrid creature feeding on raw minerals, water and electricity (??), able to reproduce autonomously on any planet where there's liquid water and a not-too-poisonous atmosphere (energy source remains to be handwaved). My personal opinion is such a "thing" wouldn't be a human any more than a very advanced AI, but, as said, this is strictly personal opinion.

Since Terraforming is, by definition in your world, effectively impossible or prohibitively expensive, we will have to look for other solutions.

Since free space tis actually full of resources in the form of asteroids, NEO's (or their analogues in other star systems) and comets in the trillions, and flooded with solar energy from the central star of the system, this is a good environment for life to take hold. Specifically, plant life.

Freeman Dyson speculated about "trees" which could grow on comet cores, using bioengineered roots to gradually take water and minerals from the comet's core, while using heavily insulated bark and genetically modified leaves to transport the sap, carry out photosynthesis and generally carry on like a normal tree here on Earth. Human beings could live in these Dyson Trees much like insects or squirrels burrowing in the wood of an Earth tree (the Dyson tree would be proportionally larger due to living and growing in free fall), and our activities would provide the nutrients for the tree to continue to survive and grow, since it would consume our waste products, and the people living within would also tend it. 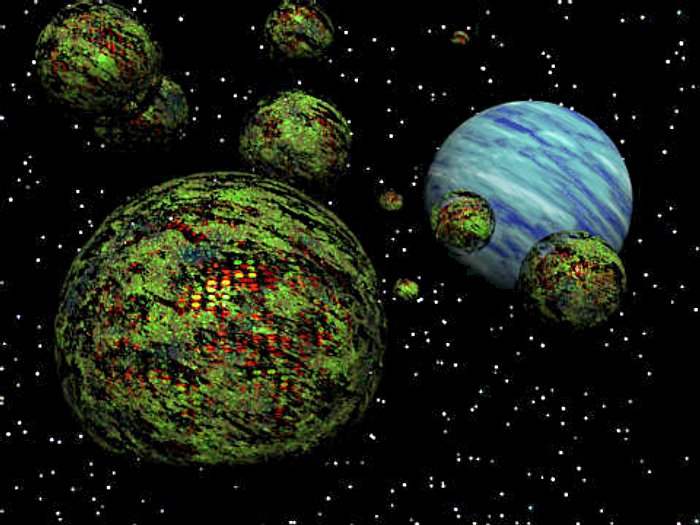 A forest of Dyson Trees near a planet

More directly, a human could directly become a symbiont with a genetically engineered "hyperplant". In this case, the plant would sinks roots directly into the human to extract human wastes like urine and carbon dioxide, while supplying the human with carbohydrates, oxygen and proteins. The large leaf area collects solar energy, and can also be used to provide thrust for moving through space. The human/hyperplant combination would land on small asteroids from time to time in order to replenish the minerals and water which eventually is lost because systems are not 100% efficient. 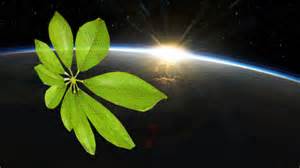 The person is encased somewhere in the centre of the hyperplant

I agree with the commenters who have stated that colonizing planets is much more feasible than creating space-worthy humans, but here is a quick attempt to answer your question...

SuperTerrestrials (latin is a dead-language, why would we use it to name a new species)

At an absolute minimum, these creatures would be androids, with a radiation-hardened DNA vault and redundant blood-born nanite swarms dedicated to repairing damage to their soft parts. Additional nanite swarms would constantly flow through their dense metal epidermis, allowing it to remain supple and malleable while still shielding against radiation and micro-meteorites.

Since the whole respiration and digestion process requires vast quantities of oxygen and water, these systems would have to be replaced by another energy source. Collecting and converting solar radiation would probably be another function of the metal epidermis nanites. A closed-system which recharges consumed carbon-waste products and reassembles them into consumable organic energy sources (using the captured solar energy) would be needed to translate the star light into something that cells can feed off of.

Procreation would be as much an engineering exercise as a biological event. A child would be conceived and gestated in the normal way, but during that gestation time, non-organic components and nanite swarms would be added to the fetus, created by factory components integral to the mother's android body.

Mobility is perhaps the hardest challenge to overcome. In open space, the superterrestrial is as much a victim of inertia and momentum as everything else. they can't just walk across the vacuum or push off against the nothingness. If they find themselves untethered and in motion, they could theoretically continue on their current vector till the end of time. They might be able to survive being in space, but that doesn't make space any safer a place for them to live in. For this reason, most superterrestrials would choose to live on unterraformed worlds and large asteriods, to reduce the chance of accidentally taking a long slow walk down into the sun.

Those who do choose to live outside of a planetary gravity well would probably live in enormous free floating webs hanging from even more enormous metal frameworks. By constantly having a web within reach to shift or stop an undesirable trajectory, the superterrestrials could hop from place to place, floating free from the burdens of gravity. Humanoid spiders, scurrying around in a web that spans the solar system.

Not the answer you're looking for? Browse other questions tagged space science-fiction futurology genetic-engineering macroengineering or ask your own question.

28
Could a civilisation exist as 'space-nomads'?
92
How to keep humans pilots instead of AI in sci-fi future?
3
Human rights in space
110
Would intelligent life evolve any other body plan than humanoid?
5
Effect of red giant phase on the Solar System
6
Largest possible man-made planet-like body
64
I don't want to live on this planet anymore
9
What would be in a shuttle's survival kit for aliens trapped on a primitive planet?
4
The Source of Gravity Based Destruction
6
I want my aliens to arrive at the edges of the solar system. They would arrive in a week. What do I need to have?