Doctor Eric Von Dufe may be a mad scientist, but he still has to work on his evil side. His latest plan? Create small versions of large animals and large versions of small animals. Assuming he has all the required resources, the animals will have access to everything they may need and their bodies would be able to adapt to such sizes, is it possible for him to create a cat sized horse or an elephant sized guinea pig through nothing but selective breeding? If it is possible, how long would it take? Are there any other possible ways to achieve this given current technology? Would you buy one?

The square / cube law is real but I do not think it applies here. Guinea pigs and elephants both share the same basic mammal body plan. If a mammal of large size X can exist then physics does not preclude another mammal of same large size X from existing.

One way to think about this is to consider the fossil record. What are the extreme ranges for these given lineages that are represented. Presumably these fossils of some random individual are not of freaks but of animals fairly representative of their species.

The largest rodent described so far is Josephoartigasia. It was the size of a bull, or comparable to a Borneo pygmy elephant. The digestive setup for capybaras is similar to that of guinea pigs and so the existence of this animal means it is possible for a rodent to get this big. 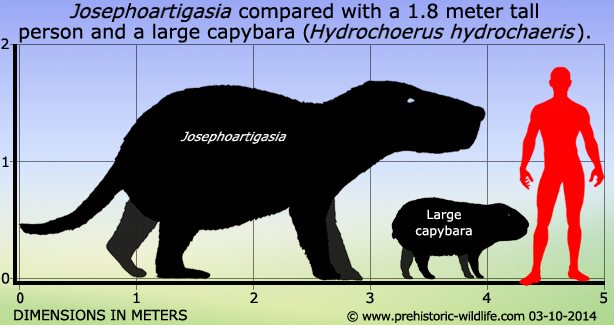 Pygmy elephants are small but there are fossil mammoths (also from islands - insular dwarfism) that were smaller. The dwarf mammoth endemic to Crete was only a meter tall at the shoulder.

I cropped this image to exclude the big ones. See the original here. https://homero13.deviantart.com/art/All-species-of-Mammuthus-446196499

Taking this logic to its extreme one might say that the large and small extremes for land vertebrates are staked out by sauropods on the big end and shrews on the small end. Once you get back in the water even larger and smaller become possible.

Once it is established that large and small representatives from these two orders existed, the question is how to make them larger and smaller. It could be selective breeding and / or genetic engineering.

There is interesting recent data about why small dogs are small: it is invariably a set of genes which produce a loss of function in insulin-like growth factor.

We then genotyped each marker, together with previously reported size-associated variants in the IGF1 and IGF1R genes, on a panel of 500 domestic dogs from 93 breeds, and identified the ancestral allele by genotyping the same markers on 30 wild canids. We observed that the derived alleles at all markers correlated with reduced body size, and smaller dogs are more likely to carry derived alleles at multiple markers. However, breeds are not generally fixed at all markers; multiple combinations of genotypes are found within most breeds. Finally, we show that 46%-52.5% of the variance in body size of dog breeds can be explained by seven markers in proximity to exceptional candidate genes. Among breeds with standard weights <41 kg (90 lb), the genotypes accounted for 64.3% of variance in weight.

The IGF genes are conserved across mammals and so you could replace endogenous elephant genes with the small dog variants, or produce similar loss of function mutations in the elephant genes. I bet the Cyprus mammoths had IGF mutations.

Interestingly, the converse is not true - I had thought Great Danes had gain of function IGF mutations but not so. I do not think it is known.

One interesting way to get huge is how the ligers do it - apparently there are genes for huge growth which are typically suppressed, but which are unmasked in a lion father / tiger mother cross. Ligers are the largest cat though maybe not largest ever. 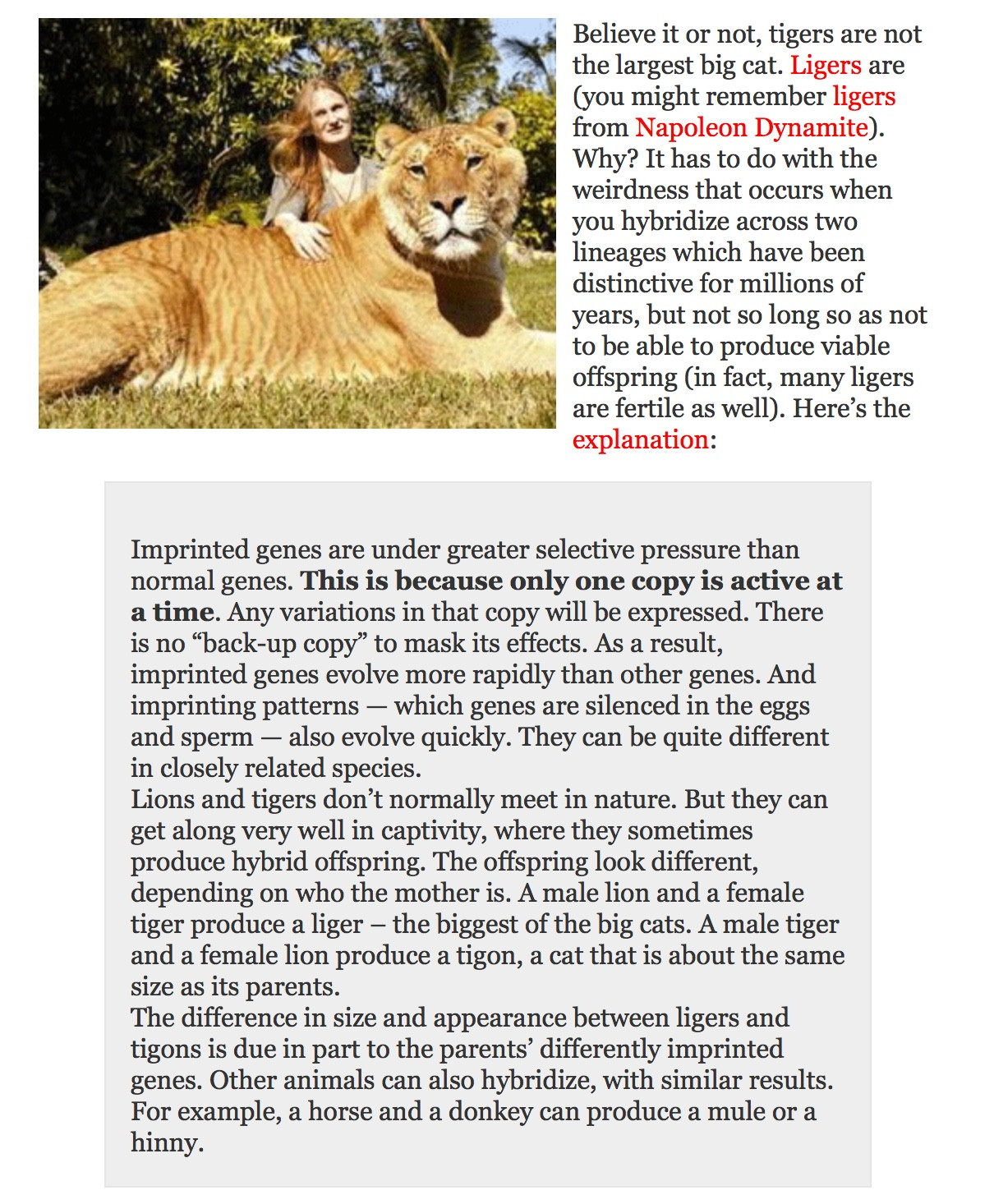 I was interested to see if anyone had published the genetics behind the superlarge domestic hogs - these hogs can get to be 1500 lbs and 12 feet long. I came up empty; if anyone finds a link for this please edit the idea to add or post in comments.

Lastly re digestion: I think a giant guinea pig would do fine. Big pigs are apparently better grazers.

Since we feed pasture as our primary food our pigs are economical to much larger sizes so we keep them longer and they grow bigger as a result. Big animals are better grazers. They tend to stop growing around six years of age or so, typically maxing out up around 600 to 800 lbs for the sows. The boars generally top out from 1,000 to 1,500 lbs. At over 1,700 lbs Spot was on the big side. He was our longest boar for sure at about 12′ long – the end result of years of breeding for extreme length which means more bacon and pork chops. 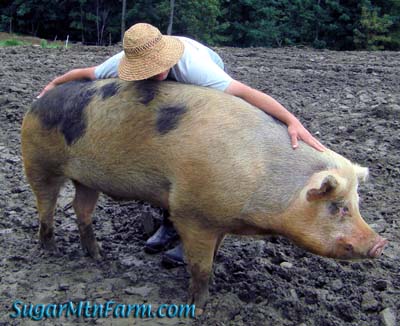 A tiny elephant would run into trouble on the opposite side as elephant digestion is geared for large amounts of low quality browse, which does best with capacious bodies. Tiny elephants might need to eat more digestible / energy rich foods than their large ancestors. More fruit. More grain. More... meat.

This is theoretically possible, but not in the short span of a lifetime. If you were to continuously manipulate "mega-genes" in animals for a long enough time, the population of this animal would periodically get larger and larger. Unfortunately for your scientist, this will take much longer than the time he has left. Think of it as a sort of "manipulated evolution"

You cannot do those thing neither with selective breeding nor with any other method because of the square/cube law.

A guinea-pig of the size of an elephant would collapse under its own weight.

An elephant reduced to guinea-pig size would be unable to breathe and digest food.

For anything possible you can do it with selective breeding (after al it's just how guinea-pigs and elephants were made in the first place).

Not the answer you're looking for? Browse other questions tagged science-based science-fiction genetics genetic-engineering or ask your own question.

25
How advanced or effective weapons can be created from mostly animal body parts?
5
Which will survive better, a duck-sized horse or a horse-sized duck? What about the other creatures in this magical world?
9
Little Green EARTH Men?
5
Unplanned Colony: what industrial level could be recreated in the short-term?
7
How do I use late Victorian mad-science to tame lost world megafauna?
0
Evolution: Tilting the scales of the arms race between cobras and mongooses
11
Anatomically Correct Modular Body Plan Animals
7
Can a Mad Science Experiment Involving Men and Horses REALLY Create a Realistic Centaur?
15
A wizard is magically engineering the perfect agriculture animal that will replace as many farm animals as possible, what is he making?