Question about the possibility of a Ternary planet system

Ok, I know it sounds very far-fetched, but I'm curious. We know that Binary stars truly exist, and that binary planets are all but confirmed.

Here's my insane question: can there be a TERNARY planet orbit?

Is it even remotely possible that three sister planets can orbit each other?

This would be awesome to add to my story, but I'd rather not include something that's absolute fiction.

Klemperer Rosettes are (kind of) gravitationally stable sets of celestial bodies that come in many configurations and the definition includes a number of three world configurations. These sets are completely stable unless perturbed at which point they come apart immediately because they don't have any self correcting mechanism, like a gravitational centre.

Any planet with more than 1 moon satisfy your question. Take Mars, or even better Jupiter or Saturn. That's the only way to have a stable sistem: a body largely more massive than the others, so that it can be the center of mass of the system. Other configuration are unstable on the long run.

In particular, you can have two co-planets orbit each other (by all rights the Earth Moon system should be considered co-planets; the Moon is larger than most moons in our solar system. But Saturn Titan is even a better candidate: Titan is 3200 miles in diameter and 80% more massive than the Moon).

As my comment above says; The Three Body Problem [3BP] is only a computational problem, it is difficult to solve 3 simultaneous differential equations.

That said, we already do know 3BP can be stable: I just gave two examples! The Earth-Moon-Sun was the first 3BP recognized and studied extensively by the guy that invented gravitational problems in the first place: Isaac Newton himself.

The 3BP is only about us puny humans calculating whether such a system is stable or not: Obviously it is possible but in our examples (and what we know about other moons in our system), the stable ones have large factors of scale, at least as far as mass: factors of 20 or more.

In terms of mathematics, this allows orbits that cause small perturbations, so in laymen terms they basically cancel out or can be ignored, as long as we don't have any resonance patterns that cause an amplification of relative movement (so that some part reaches either escape velocity or gravitational collapse so they crash into each other).

but the mass factors should not concern you too much: Our Moon is 1.2% the mass of Earth but has a surface area that is 7.4% that of Earth; 14.7 million square miles; about 4 times the size of China (or USA). Plenty of space to support a population.

If the Moon were denser it would have a smaller radius and therefore a higher surface gravity. Platinum is a very dense element; about 3x that of iron and a noble metal (not very reactive). If nearly the entire mass of the Moon were Platinum (say except for a crust about a kilometer deep), the radius would be 934.9 km (instead of 1737.1), and the surface gravity would be 57% that of Earth. That might be enough to hold a breathable atmosphere.

According to the Three Body Problem, a ternary planet would be unstable because this, actually, would involve at least four bodies: The triple planet plus the star they're orbiting (plus another possible planets on the star system).

I have two different suggestions for you:

However, there are triple star systems which are stable. A small, rocky, planet-sized habitable moon could, then, be orbiting a double gas planet from a relatively large distance and in a ressonant orbit, in a way that the double planet could be considered a single source of gravity.

But the most radical and cool idea is to put the planet somehow on one of the Lagrangian points of the double planet. Again, the more massive these two were the most stable the Lagrangian orbit would be. There's a well known gravitation result for two large and close bodies called the Roche geometry. These contours show imaginary surfaces with constant gravity, and the L1 to L5 points are the Lagrangian points, points in space with the gravity pull from both bodies cancel each other.

You don't need to go far away to see this. Jupiter and Saturn have dozens of asteroids trapped on their L4 and L5 points. For Jupiter, these are called the Trojan and the Greek asteroids. In fact, trojan is a generic designation for any kind of asteroid that sits on a Lagrangian point of a planet. 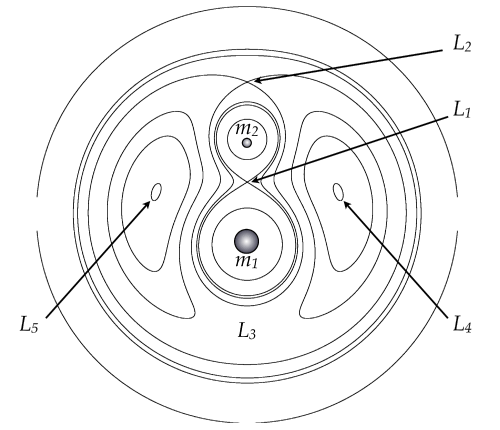 Not the answer you're looking for? Browse other questions tagged planets space orbital-mechanics or ask your own question.

6
Two orbits, Four habitable planets in the goldilocks zone?
4
Could this complex star system work in real life?
6
About how many planets are plausible for this binary-star system?
20
At what minimal technological level would the inhabitants of a binary planet system need to be to communicate with each other effectively?
6
Please help me calculate acceptable planet sizes & eclipse shadows cast by my binary planet system
7
Is it possible for a planetary ring to exist beyond a planet's Rochelimit?
10
Moons in Binary Orbit
1
Can an Unstable Ternary Star System Last Several Hundred Years?