We've discovered stars that are contact binaries. This means that they orbit so close together that their photosphere reaches through their Roche lobes and links the two stars together. 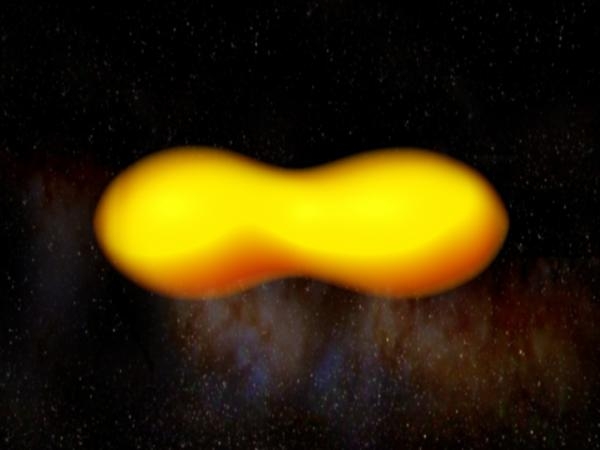 This started me thinking about the possibilities with respect to gas giants though, could in theory gas giants orbit each other also so close together that their atmospheres merge? Would they be able to hold together in that state or would they rip each other apart?

A direct quote from here would be nice, but I'm not sure if there's any relevant copyright on the text, so I'll just summarize. Here are the steps to forming a contact binary star system:

Here's why I don't think this could happen in planetary systems:

Maybe a temporary common envelope could form at some point, though the system would be unstable.

Regarding what TimB wrote in the bounty - I don't have the expertise necessary to do an analysis like that, so I'll leave that to someone else. I wouldn't be able to do it as well as it deserves.

Estimates of Jupiter's Core put it at 4-14% of Jupiter's Mass. Let's go with the 4% number because we're just seeing if this is feasible. If we assume the core is average with the mass of Jupiter, then it would need to be about .26RJ - so way big.

From here we should be able to calculate the minimum mass needed of the core (more mass = smaller in radius) for the cores to be outside the Roche radius. Unfortunately I need to head to dinner so I can't finish it up right now, I'll try and get some pen and paper later and work through the formulas. I don't think it's looking good though, the core would need to be really massive to get under that .18RJ.

While HDE 226868 has a bunch of reasons against them I don't think they add up to a total showstopper.

As he says, they can't form near each other--but that doesn't preclude a binary pair from a capture event.

Now suppose the capture ended up with a retrograde--they'll spiral in due to tidal forces. At some point you'll end up with a contact binary. Soon after that they go splat.

56
Could two planets be tidally locked to each other so close they share their atmosphere?
26
Can an atmosphere englobe a planetary ring?
2
Is this gas giant possible?

40
Habitable moon of a gas giant: working out the sizes and distances
9
Could air gas giants exist?
13
Can two stars orbit each other but each have their own planets in stable orbits?
3
Are my planets too close together?
9
How far should second star be in my binary system?
5
When universes collide
8
Can Multiple Stars Naturally Merge Into One New Star?