Is there dense, non flammable gas that I can cover the Earth in?

This question is related to Deadly, Heavier than Air Gas, and Is a world with two different types of air possible? but has several different criteria. I've also looked at https://chemistry.stackexchange.com and not found anything

I'm building an alternate Earth in which, some time in the 18th or 19th century, the world was covered to a depth of ~100m by a certain gas.

I need a gas with the following properties:

Unfortunately, it's been a while since I last did any Chemistry and I can't think of any gases that quite fit the bill. The noble gases are out because they don't help with the fuel element, while gases like Benzene fail the 'not flammable' test.

Is there a real gas with the above properties, or will I have to go with Handwavium?

I have been pondering this one and I think I have a candidate. Fog.

• /Denser than air/ – water as a gas is not denser than air, but can exist at earth temperatures in equilibrium with its liquid phase. The presence of microscopic droplets of liquid condensing from and evaporating back into the gas makes the fog more dense than air. Additionally (as below) liquid/gas water will stratify out with cooler, denser air.

• /Will remain separate from the air above it / Gases are all miscible but still air will stratify by temperature. Cool air is denser than warm. Cool conditions are necessary for the above described equilibrium of liquid and gas phase. If the air is stratified by temperature, the water vapor will stay in the lower cooler layer. This is a ground fog. 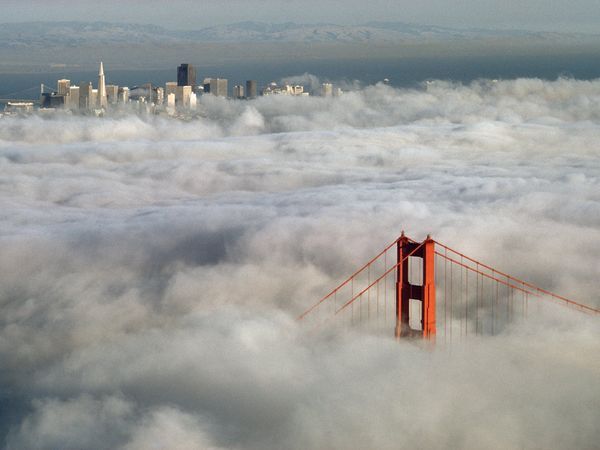 • /Gaseous down to at least 0°/ Sure. Gaseous water can also exist in equilibrium with the solid form: ice. On reading I learned the difference between ice fog and freezing fog. Ice fog is suspended crystals of ice in the air that just hang there. Freezing fog is supercooled water that turns to ice when it touches anything, like the road. 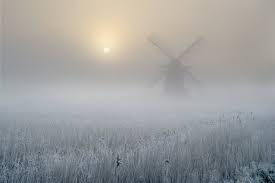 Don’t go out driving in the freezing fog, worldbuilders.

• /Contains Hydrogen or Helium atoms/ – plenty of H in H2O and extractable with primitive electricity tech.

I am liking this also because fog is ok for earth. Fogworld would be spooky and surreal. I could suspend my disbelief for a world where fog moved in to stay.

No, sorry. Gases by definition are miscible. There are no gases which (in the absence of a gravitational (or possibly electric) gradient will separate. On Earth the gravity is insufficient to even get CO2 to concentrate below the O2 and N2 (molecular wts 44, 32, 28 respectively).
Also, your desire for a gas which is a source of energy but is "safe" is another oxymoron. If it can be readily converted to another state and provide energy, it is quite unlikely to be "safe". Are you able to give a counter-example? (Keep in mind that wood, as saw dust, is quite explosive). Two gases come to mind which are dense and fairly inert SF6 and NF3. Both are big time greenhouse gases but not too toxic, iirc. You might be able to get some energy from them, I'm not sure what the reactions would be, possibly by reacting them with water...just a speculation. 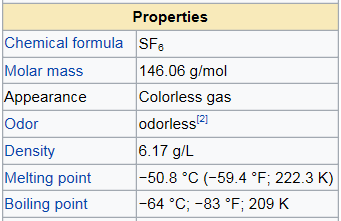 As with all gases, the density of SF6 affects the resonance frequencies of the vocal tract, giving the voice a "demonic" quality when SF6 is inhaled

Your alternative Earth would have to have a radically different material composition from our Earth. There is a gas that might fit the bill. It is rare on our Earth, but if on yours it is very abundant then it could work.

The candidate gas is xenon.

Xenon has atomic number 54; that is, its nucleus contains 54 protons. At standard temperature and pressure, pure xenon gas has a density of 5.761 kg/m3, about 4.5 times the density of the Earth's atmosphere at sea level, 1.217 kg/m3

But let's look at the density of air.

Air's density is 1.225 g/L. The density of xenon is 5.881 g/L. Xenon has approximately five times the density of normal air. Therefore, if xenon was an abundant gas in the atmosphere of a planet it could accumulate at lower altitudes. However, the miscibility of gases would tend to counteract the probability of a denser layer of up to one hundred metres (100 metres).

For more information about the noble gases.

There are a few elements in your specifications that don't make sense.

Not the answer you're looking for? Browse other questions tagged science-based chemistry gas alternate-earth .

36
Deadly, Heavier than Air Gas
16
Is a world with two different types of air possible?
5
How can a world have permanent dense fog?
3
climate and behaviour of a gaseous ocean

6
Is this concept for an LTA-gas' associated element lifecycle feasible?
8
Macroevolution in an isolated room
6
Separating light gases from heavy without chemistry
8
Are these atmosphere compositions for habitation in space plausible/do they cause problems I don´t see?
20
What kind of "fog" could be harvested (and processed) for fuel?
5
Life-supporting climate for an organolithium planetary environment?
1
Recreating dragon fire