This is a world with underwater merfolks and other humanoids. They have opposable thumbs, so they can use tools humans can use. Lets assume there's different subspecies and races of these merfolks, so they have very different dietary needs. They have human level intelligence. They cannot get goods from land themselves.

What would their trade center around? What commodities are important to sustain the population and increase productivity? What services would be important that we don't have on land?

Edit: The technological level would be very medieval and agricultural. Cities, but still a lot of foragers in the rural parts. The species is very multicultural, but most of the societies are aristocratic city states or empires. There's cities with more than 10 000 people, but these are rare power centers in the region.

They can dive to a depth of 500 meters without trouble.

The usual basics are probably still needed. Food, tools and clothing/adornings (I'll assume they don't need clothes to protect them from the element (singular because it's just water) which they should be adapted to, but likely from the point of modesty or fashion).

Grooming services will be needed and basically any activities which comes with the level of technological advancement you desire. A hunter/gatherer tribe does not need much in terms of economy as there is very little degree of specialization.

But as soon as you need to specialize you get the need for services such as childcare and schooling. With medical advancement you need to set aside tribe members for various medical professions. With religion you get a priestly caste and probably also a need for a military/constabulary profession (to keep the flock in line and to enforce the laws of Neptun/Dagon/Old Father Shark). These are no longer producing their own food and as such need to sell their service (collect tax).

And of course you have the old trope about the "oldest profession" though if they procreate like fish that might be moot. (Also you probably need to invent shame and sexual repression for it to be a viable trade, so presumably priests come first. Properly refuted by Perkins, we agree that shame and sexual repression does improve the market though.)

Also, the question (to me at least) is what kind of trade will occur between land and sea. If they are isolated and have no contact with humans, just pick a technological level (pre-civilzation, ancient, medieval, pre-industrial, post-industrial, information age... whatever suits you story) and assume that there will be analogues to whatever land economy you're mirroring. (Herding dolphins instead of cows, harvesting kelp instead of wheat, using lava flows and heat vents to cook food and make tools.) If they have contact with the other element you want to think about what's made where. Perhaps tools are made on land and traded for pearls and corals (or hard to fish from the surface fish and crustaceans).

G0BLiN asked, so I'll see what I can think of. Paper currency is of course out and metal might be unfeasible as well depending on the tech level. (Whether they can use lava flows to forge or not.) But there are a lot of other viable currencies.

This one goes both ways. In medieval times iron was valuable. People often don't realise how valuable. A few ounces of good iron could buy a cow and cows were valuable back then.

Merfolks are going to have great difficulty forging metals if they need to stay underwater.

However they may have access to metal nodules from the sea floor. 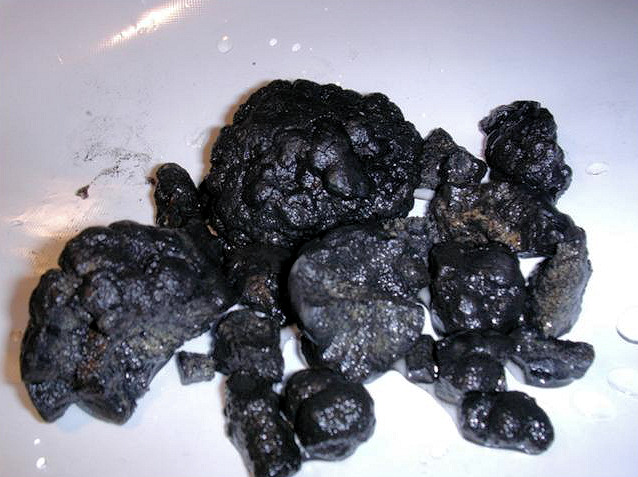 This gives us at least one pair of trade goods such that both sides benefit from the arrangement. The merfolk sell metal ore nuggets, the humans sell metal tools.

"The technological level would be very medieval and agricultural."

No, it wouldn't be; don't just try to transpose terrestrial societies into the water and expect it to be plausible. Agriculture is a function of sedentary societies that grow plant foods in soil, and medieval (or even Iron Age-like) cities arise from the social stratification and role differentiation that agricultural surpluses permit.

An aquatic society could hunt (fish) and gather almost everything they'd concievably need, and since fish, sea mammals, and whales are highly mobile, so would be our merfolk. They might need tools and weapons to successfully hunt, but those would likely be bone from whales, not wood or metal. They might possibly cultivate or farm some shellfish, the way some hunter-gatherers cultivate small garden plots to supplement, but they wouldn't have a need for large-scale agriculture. No sedentary societies would evolve and no agriculture would be necessary or possible given the incredible diversity and availability of ocean resources. They'd just fish, and optionally might gather kelp. They might form federations and alliances of tribes, but overall, if you absolutely need a terrestrial analogue, think about precontact North American plains Indian tribes living off the buffalo, not medieval feudalism.

But really, nothing would be analogous to a society we'd see on the surface. In fact, they wouldn't even look human - even based on a humanoid body plan, they'd quickly evolve blubber and camouflaging skin tones, legs would become vestigial or fused, genitalia would be protected and internal, voices would likely become like those of whales....picture humanoid seals and whales, not humans with tails.

Let's start from a simple society, for sure they will need to trade on food: seaweeds, various fishes, fresh meat caught by local "grounder" daring to venture to the border of the sea.

Then, what else may they need? Anything made of wood can be used as "lighter than water" device, as it will float up, so no fancy ebony furnitures but a great help in carrying around heavy stuff.

For similar reason they won't be able to forge metals, as having a fire underwater is pretty much impossible. But at least they can trade worked metals with the people above waters.

I imagine toolmaking would be important and so would any good material for making tools like suitable types of stone, bone, wood. Also rope and material for fishing nets.

Even if fishing is not the main food source fishing would be an important skill, including the knowledge of where to find fish, in what seasons etc. Going after big fish might be more akin to hunting and require special tools & techniques. From them you would get the big bones for making bigger tools or weapons and even things like whale oil from whales.

Manufactured items from the surface that could not be made underwater would be close to invaluable. Maybe harvesting resources from land would also be a thing? A society like you describe might have developed techniques to fell trees into the water to get at the valuable wood. Even if that takes digging channels into the land where trees are. They might go to great lengths to harvest the "plenty of the land" in creative ways similar to how human civilizations have exploited the sea.

Fortress building could also be a science in itself. Underwater stone fortresses with gates opened by moving trapped air bubbles or other mechanisms to produce lift.

Instead of horses dolphin breeding/training could be a major part of the economy. Fish farming inside giant nets or in ponds at the coast would also be doable.

Since you mention different dietary needs I think the base trade would center around food since your gatherers would often be able to find some that would fetch a better price elsewhere. Consider that dead fish will spoil quickly. So preservation or even moving around live fish might also be a business.

For more ideas along the same lines I recommend thinking of underwater alternatives to what our own civilizations developed on land in pre-industrial times.

Not the answer you're looking for? Browse other questions tagged economy underwater merfolk .

14
What would out-of-water warfare look like for underwater people?
0
What are the priorities to colonize a new piece of land?
5
What would a city that houses humanoids, centaurs, and merfolk look like?
24
Fantasy Macro Economics: What would Merfolk trade for?
6
What kind of house would merfolk build?
8
How would merfolk food presentation look like?
13
How would WW2-level navy deal with my "merfolk"?
9
What materials would merfolk use to craft armor?
6
Merfolk Beauty Products (part 1: makeup)