The Nachtkrapp is a german version of the bogeyman or in a more general term a kind of bugbear. Nacht is the german word for night and Krapp is used in southern germany and austria as a word for raven. There are many different versions of this tale. Most of the time it was used to make children go to bed by stating that the night raven will abduct them when they are outside past their bedtime.

But I am especially interested in a norse version of the night raven, for which I am trying to think of ways to explain how they could evolve naturally:

According to the german wikipedia article Krapp can also be used as a general term for birds belonging to the raven family, or Corvidae, but it might also just refer to the raven black color, similar to the word Rappe, which is a black horse. The night raven might also refer to other birds, such as owls or night herons.

I was trying to think of ways to realistically create such a creature in my world. The criteria are listed above and I am trying to come as close to it as possible. This means that for example the part about messily devouring children and ripping off their limbs can safely be ignored for normal sized ravens or owls. The legend sometimes states that the raven is indeed a giant raven, but I want to avoid discussions about the Square-Cube-Law, so we will go without something roughly the size of a normal raven.

I was thinking about basing it off the Medusa and going with a similar approach to this great answer, but in the case of the Medusa answer the hair is spitting a venom at the prey, which leads to a slow death instead of looking in the eyes of the creature. Turning into stone also doesn't seem to fit the traditional idea of a general harbinger of death and disease. To make sure that this question is not viewed as a duplicate to the linked question I will postulate the following that I am trying to achieve in addition to the criteria listed above:

How close can I realistically get to my harbinger of death, the Nachtkrapp?

A list of all the questions from the series Anatomically Correct can be found here.

Like the majority of harbingers of death, the dreaded Nachtkrapp doesn't foretell or supernaturally portend a death. Most especially when it is disease or death caused by plague or illness. The nachtkrapp could have supersenstive senses that enable it to detect those who are afflicted by illness or plague, but who have yet to express the symptoms of their disease. The fact that persons who see the nachtkrapp and succumb to illness this will be naturally enough interpreted as being caused by the bogeyman bird when, in fact, it's not. Errors in causation are often responsible for imputations of supernatural agency when none exists.

The querent has established that the nachtkrapp is a giant creature. This explains its ability to rend the limbs of children and take them as prey.

Anyone familiar with biology would be concerned about a giant bird can get about at night with empty eye-sockets. The answer is simplicity itself. The apparent eye-sockets are sources of powerful ultrasound. This obviates the need for eyes of the conventional kind. What might pass for eyes in any other species of bird is replaced by membranes capable of generating high-intensity ultrasound. These would be part of the nachtkrapp's nasal passages, powered by powerful blasts of air, which a giant bird should be capable thereof, and not ocular cavities where eyes would be located.

It is by looking into the sightless eye-sockets of nachtkrapp and being exposed to its intense and lethal ultrasonic "gaze" that brings death. While medical ultrasonic scanning and sonotherapy is regarded as safe, there are some potential deleterious effects.

One of the most well known effects of ultrasound is that as Ultrasound waves pass through a tissue they tend to heat it up. The tissue can easily be warmed to 40 degrees Celsius. Although in vivo the heat is usually easily carried away by blood circulation or simply dissipated into surrounding tissues. this regiment can be applied in a technique called Ultrasound therapy where this heat is used to stimulate repair to damaged internal tissues. Another well known effect of Ultrasound are cavitations. Cavitations are small bubbles of gas that are released upon exposure to extreme negative pressure. These bubbles can cause cells or even tissues to rupture.

In the case of the nachtkrapp it can be assumed its high-intensity ultrasonic 'beams" will be powerful enough to cause deadly harm to those who are unfortunate enough to see this fatal fowl, sorry, dread harbinger of death who flies by night and preys upon little ones who don't go to bed early.

You could have your bird (which I envision as a large owl) possess the evil eye. The wings could have coloration around the holes like eyespots, which can be seen on the wings of some birds. These are lesser evil eyes. 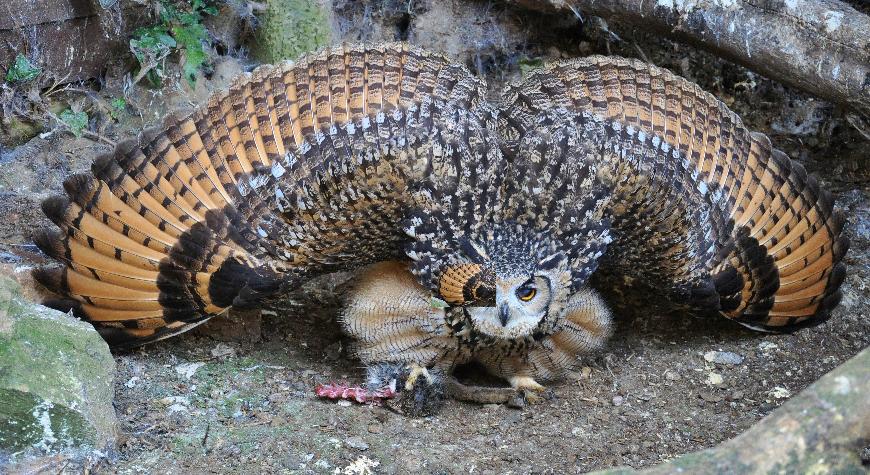 The evil eye is definitely bad and feared. People worry about it and wear charms against it - to this day. But it is not mechanistic. The ancient Greek philosphers were in no doubt that it was real but they could not explain how it worked. There is a huge body of folklore, from many different countries and you can borrow, mix or match.

How does a bird with no eye have the evil eye? Maybe it does have an eye but it does not always show. It comes out when the bird wants to use it.

I think it is creepier to leave up in the air how exactly the evil eye works. From a storytelling standpoint, if a person sees a bird at night and drops dead, further literary endeavors from that persons point of view will be limited. A person who sees the evil eye and lives - for the time being - still has agency and a viewpoint and can help make an interesting story.

Not the answer you're looking for? Browse other questions tagged biology creature-design evolution mythical-creatures mythology .