How to quarantine an entire peninsula?

The general backstory for the world I'm building is that the entire dwarven homeland in Ireland has to be quarantined after a S.T.A.L.K.E.R.-style disaster in the mid-19th Century. All 3000-3500 square km of it. Here's a quick map of the area from Google Earth; you can find it in Google Maps here. 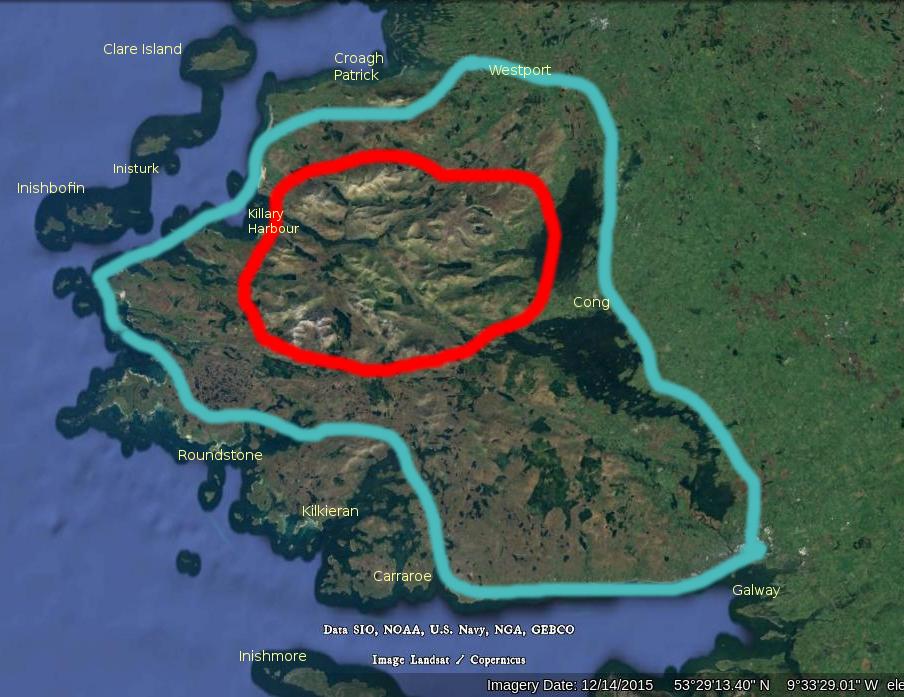 The minimum area that has to be closed off are the hills inside the red inner circle, where reality has gone completely out to lunch. However, I think the actual quarantine line would be along the outer blue line, for a couple of reasons:

That's a lot of ground to watch. So, how would the dwarves (attempt to) seal off this entire area?

Fortunately, you have chosen a time period when large scale earth works were possible. Between 1817 and 1825, American civil engineers dug a 350 mile long canal between the Great Lakes and the Hudson River.

A similar canal from Galway to Croagh Patrick would only have to be 50 miles long, so in theory could be finished in about 1/7th of the time. Call it 2 years to account for planning and setup time.

The time frame could be reduced considerably if you could push your blue line slightly west and thus utilize the existing depths of Lough Mask and Lough Corrib. The excavation could then be limited to 20 miles or less. Getting the canal dug and fortifying it's eastern coast (and the eastern shores of the lakes) could possibly be done in one year or less.

During that construction time, an unfortified military presence would be needed above, below and between the two lakes. After the canal and barriers are in place, that military could be reduced to the level needed to monitor and defend the wall.

All of this is based on the belief that water would be an effective barrier to the monsters. Your inclusion of Terror Birds and Squid People cast some doubt on that belief. So your dwarves may be fighting an unwinnable battle. Given the technology of the day, nothing is going to stop the spread of birds which can fly above gun range, nor people who can swim under floating blockades. It might be wiser to start building fortified cities and defend-able farm lands in regions where squids and birds don't hold such a superior hand.

Not the answer you're looking for? Browse other questions tagged military-defense military or ask your own question.

13
How could trading posts be defended against pirates?
22
How to prevent your enemies from digging under you?
32
How would one attack or lay siege to a flying castle?
4
How big should my particular military be under post-apocalyptic conditions?
6
How practical are walls and other tall fixed fortifications when it comes to the defense of a city in a post-apocalyptic setting?
5
How Many Soldiers are Needed to Patrol/Defend a Medieval Wall?
10
How might you design a solarpunk military?