What kind of forged melee weapon would be best against unarmored opponents? [closed]

In a world where humanity is fighting against unarmored monsters (as in, flesh and bones only) with medieval weapons like swords & spears, what would be the ideal weapon? I'm looking for a description that's detailed enough to make a 3d model based on it, not just "a sword". I was looking through the types of swords article on wikipedia and got completely lost because of the numbers, maybe someone who knows more about medieval weapons can help me out.

I like the pike formation. It worked very well.

If you are talking about hunting, about the only creature that was typically hunted with a melee weapon was the boar. Since a boar was one of the few prey animals that would run toward the hunter. Most others would run away so ranged weapons would be used.

Against charging critters, a spear or spear formation works very well. Pikes are nice since you can generally get the pointy bits from three rows of people pointed at the enemy.

Pikes work best in open terrain. Shorter spears will be needed in woodlands and other rough terrain (think Roman shield and spear formation).

As other people have said, a lot depends on the specific context, but I think I can give a general answer in saying that a polearm weapon like a glaive, woldo, guandao or naginata would be most effective for a variety of reasons.

One disadvantage is it becomes unwieldy in tight quarters. But even samurai and knights would carry backup daggers for cases like that. And it's heavier than a lot of swords which can tire an inexperienced user out quicker. Also, you have to be pretty intentional about taking a polearm with you. Can't just strap it to your waist and walk around like normal, so if you lived during a time when you weren't sure when or where you might have to fight for your life, you'd probably want a sword.

A member of the Finnish military once taught me an interesting lesson. What do you want to achieve on the battlefield? In his real-world example, your preference isn't to kill because dead people can be ignored. You want to maim, because that ties up one or more other people to care for the wounded or produces distracting noise on the battlefield (screams). This plays on a basic human "weakness" (from the perspective of battle): compassion.

So, the real question is, what are the weaknesses of your monsters? Are they large or small? Are they organized or not? Will they care for their own?

Further, you want to consider the value of a particular kind of wound. A bludgeoning weapon (club, metal rod, mace, flail) disables quickly but is difficult to get a kill in a single stroke. They're very cheap and easy to manufacture. They break bones and render muscles useless.

A medieval sword (like a Great Sword or a Bastard Sword) is little more than a club with an edge to pierce armor. They took a great deal of strength to use. Axes are not much different than a sword, basically favoring attack over defence (more energy on attack, bad balance on defence).

Curved swords were generally used by cavalry as the curve gives both balance to the rider and reduces the ability to become stuck in the victim. (The Japanese Katana isn't curved for this reason. It's curved due to the tempering process.) The added inertia from the horse meant massive almost always fatal damage. You find some cultures on earth used them as ground weapons, but they are (in my experience) unweildly and only good for creating slashing wounds, which are not as debilitating as the broken bones of bludgeons.

Renaissance weapons like rapiers and foils were piercing weapons, not slashing weapons. As armor became less and less valuable (principally due to improved ranged weapons), agility became more valuable than strength. But you must hit a vital organ quickly to disable your opponent. They're not that great at maiming.

Spears and Pikes are good for charging oponents, but they're often use-once-then-draw-your-sword weapons as they either (a) leave your posession or (b) break upon impact with the victim.

Finally, what are the manufacturing capabilities of your people? Bludgeoning weapons are, as mentioned, cheap and easy. spears and pikes are also easy. Rapiers and foils that don't bend quickly on use are more complicated.

So, what are the goals, weaknesses, and resources? Is it easier and cheaper to maim the attacking horde, killing them latter, or must you kill first and ask questions later? Can you manufacture elegant weaponry, or are you forced to use more basic, brutal methods? Are your monster's bones easy to break, or would cutting muscle be a better maiming solution? Is precision needed to gain a killing stroke, or can you disable easily with blunt force?

I apologize for answering your question with more questions! 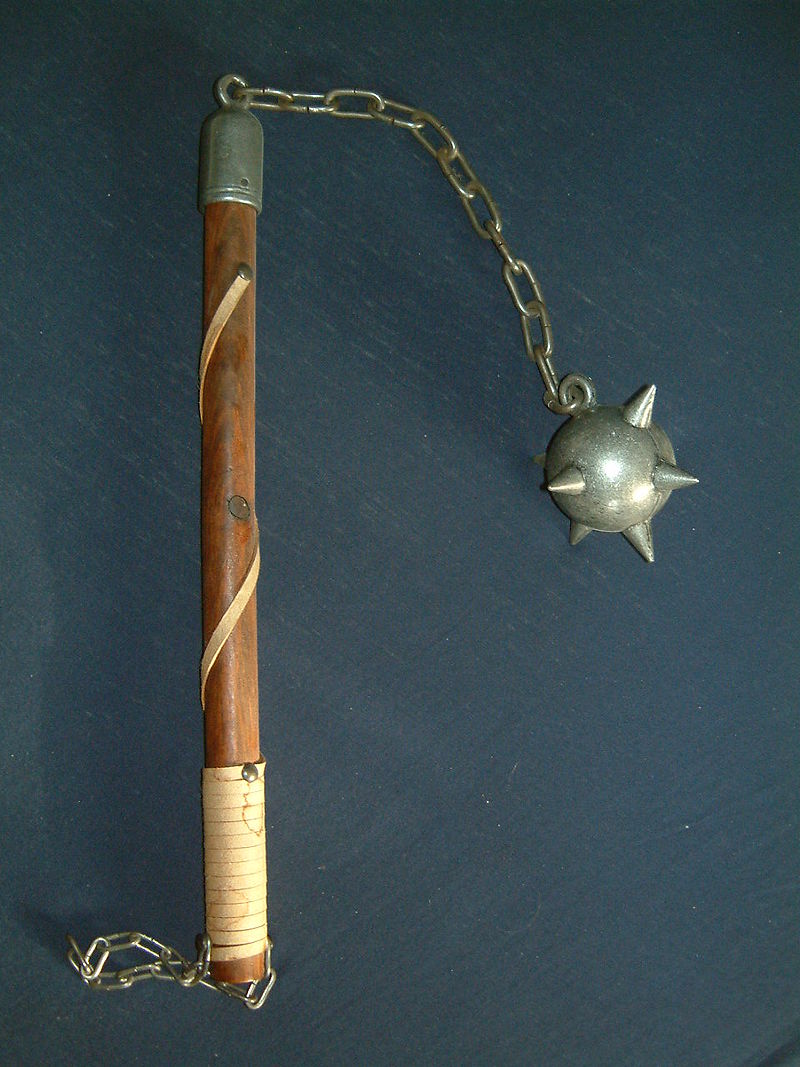 One strike could easily immobilize if not outright kill. Two strikes and it's over. You don't even have to count to three. A blow to the head or chest for the kill, and a blow to any limb to break it. Any unprotected bones coming into contact with a strong swing of this thing are going to be broken.

I suggest this over a sharp weapon because while bleeding out is a valid method of killing something, crushing organs and other vital parts is much quicker. Plus, unlike the mace, maul, or warhammer, this is a relatively quick and light weapon to utilize.

All swords are good against unarmored enemies. Totally depends of the numbers and how durable are they, but against an unarmored opponent my best choice would be a rapier. They're light, fast, you can deal fatal wounds against unarmored enemies and have enough range to take down enemies due of thrusting. Almost one handed so the person can carry a shield or a small axe.

They're practical and almost everybody can buy one, compared to curved swords, thrusting a monster would be way more destructive than slashing them.

EDIT: or use pikes/spears if range is a problem.

Spears with sharp forged metal heads; able to be held in a charge but thrown accurately for a few dozen yards, with some practice. Although not a melee weapon; arrows and crossbows should be your first line of attack, not just for long range; but on the front lines with the melee fighters. An archer can be far more accurate at 15 yards than at two hundred yards.

A wide mesh net is also very useful against animals; they get tangled and tied up, preventing charges and giving people an opportunity to pierce them with a held spear.

An animal's weakness is their need to engage up close; the more long distance a weapon can be, the better. Depending on your training time, a thrown knife or edged star would be useful for this purpose too; and an individual can carry many more of those than they can carry spears or nets. Although it depends on why they are attacking (defending young, defending territory, hunting food) Many animals will break off an attack if seriously injured by such a thrown weapon, e.g. in the face, throat or foot.

The difficulty with the question is there is no understanding of the target, besides bing unarmored. Different weapons were designed to defeat different types of defences, for example a great sword was used to cleave through chain or leather armour, while a thrusting sword like a rapier was developed to thrust through the gaps in plate armour. Smashing weapons like maces or war hammers were were designed to crush armour (or in this case, could cave in the skulls of an animal).

I would suspect that if the animal is quick, there would be a need for a weapon which is allows the user to move and strike quickly, perhaps like a small sword, while if you are defending yourself from something large like a bison or bull, a heavy weapon signed to cleave through large amounts of hide, muscle and bone like a falchion would be more appropriate. 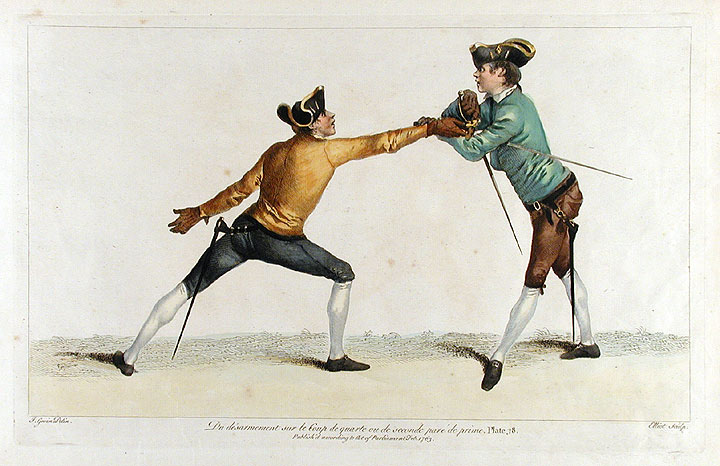 Small swords in a fight 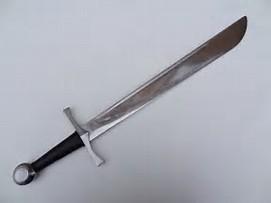 The key needs to be understanding just what sort of threat you are fighting against, then you can select the proper weapon to use.

5
What kind of weapon would enable fairies to defend against the invading 13th century medieval army?
32
What would be the most effective melee weapon against heavily armored opponent?
13
Best ranged weapon for superhuman strength?
10
Could the development of a body armour that completely stop any small arms' fire make a civilization go back to medieval-style combat?
68
What (modern) weapons could be used to destroy skeletal enemies as completely as possible?
33
How can guns be countered by melee combat without raw-ability or exceptional explanations?
6
Design for an Extendable Melee Weapon?