You can travel 500m in 10s with all of the following regimes:

The best is probably an intermediate solution, for example:

310 Km/h is 86 m/s. This means that on your 250 meters track (for acceleration), you'll have a mean speed of 43 m/s, meaning that you'll reach your 250m in 5.81 seconds. Now, 86 m/s reached in 5.81 s is 14.8 m/s², or about 1.5 g (same for deceleration). Maybe not really comfortable, especially for "regular" people not used to this kind of acceleration during transportation (except for rollercoasters), but undoubtely survivable.

Colonel John Stapp made progressively harder and harder experiments with deceleration himself to find out what the human limits are (He advocated the safety belt, by the way). 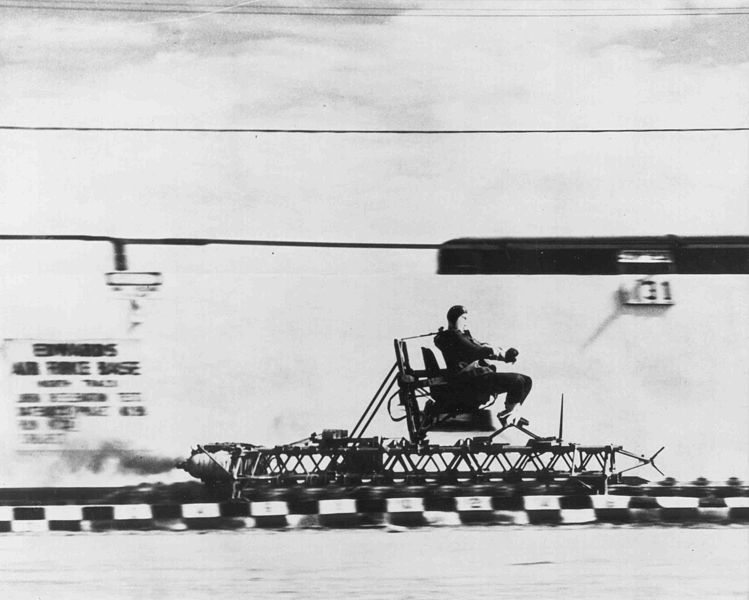 For the more pragmatic people: The shorter the timeframe, the more g the human body can tolerate.

I have done some math...

The distance you travel while accelerating with constant acceleration is

while the velocity you reach in the same time is

since you state the distance and the velocity, we can solve it in acceleration and time.

This is fairly impractical though. To do it, the cars use engines that produce around 10,000 horsepower. That puts enough wear and tear on the engine that it's standard practice to completely rebuild the engine every run.

Fighter jets can generate quite a bit more acceleration than that in a tight turn. Most have acceleration limiters, so they won't exceed about 8 G's, and will only maintain that for a very short time, then the jet will automatically "loosen" the turn to keep the pilot from passing out.

In this case, the acceleration as felt by the pilot is normally "downward"--i.e., pushing him/her down in the seat, rather that backward like the acceleration in a dragster. This has a significant effect--since it's pulling "downward", it's more difficult for the heart to pump blood to the brain. This leads to a "grey out" effect, where the brain (and eyes) are receiving little enough blood that vision becomes somewhat impaired.

Even achieving that takes fairly drastic measures--pilots wear "speed pants" to "squeeze" their legs, helping force blood upward instead of pooling in their legs. The "seat" in a modern fighter is also fairly reclined (e.g., around 30 degrees) to make it somewhat easier for the heart to pump blood to the pilot's head.

Getting to your actual question: these are probably close to the limit of what you can expect people to endure on a semi-regular basis. Accidents are often catastrophic, and even in the absence of catastrophic accidents the acceleration and deceleration take a substantial toll on drivers/pilots. A common injury among top fuel drivers is detached retinas. Don Garlits (top fuel driver, now retired) had surgery to fix a detached retina, and has admitted that it was fairly routine that the initial launch left him feeling "woozy" until he reached around the 300 foot mark.

So, getting to your specifications: accelerating at 1.5 G's should be no problem for any reasonably healthy adult. If you double that to 3 G's, there's still little likelihood of its being life threatening (especially given the relatively short track your postulating).

Tripling the acceleration to 4.5 G's gets you into the range where it's still entirely survivable, but you'd want to ensure the investor had a physical quite recently--it's getting to the point that you'd want to ensure that s/he was healthy enough rather than being able to take it for granted just because you didn't know of his/her being particularly unhealthy.

Top fuel dragsters can reach speeds of upwards of 400 km/h in under 3.2 seconds while traveling a distance of just 201 meters. They then decelerate quite rapidly using a combination of drag chutes and then wheel braking systems. The experience is no doubt extremely violent and uncomfortable, but drivers generally emerge from their cars unscathed. 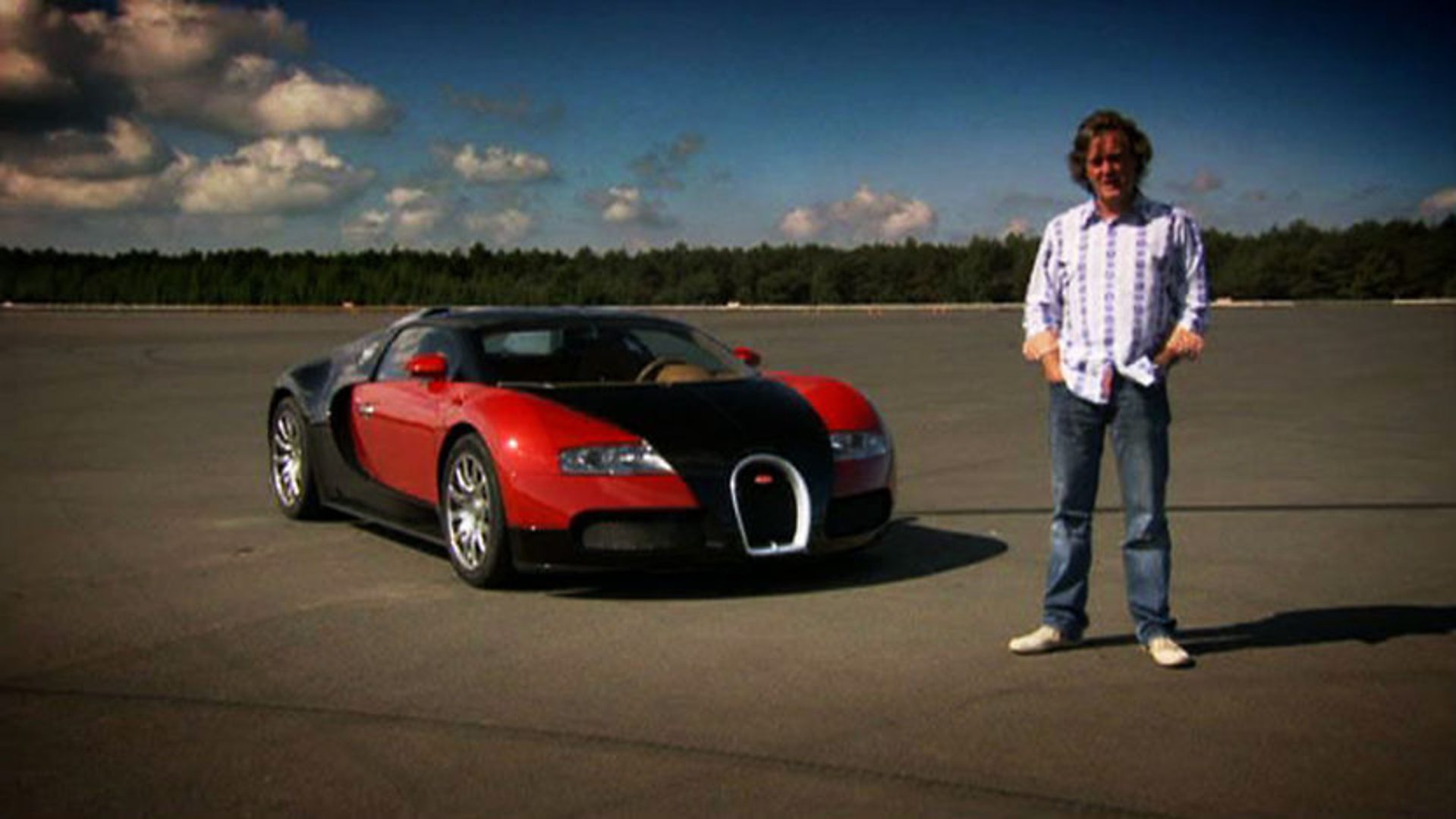 This is a real world example using the fastest production automobile. It's not as fast as your requirements, but I think it gives some great information on the physics and power requirements to do what you want and the video link is entertaining.

There are engineering challenges to consider.

You don't describe your top speed of your Tchou-Tchou. I assume it will do more than 100 mph. There are some parallels you should keep in mind to improve the story.

In the case of the Bugatti, it requires 250hp to achieve 100 mph. To achieve 253 mph, it needs another 750hp for a grand total of 1000hp. This means the engine powering the Tchou-Tchou needs to quadruple it's output just to make your challenge work.

Much of that is the resistance caused by the air in front of the car which creates friction and slows it down. You will have the same issues in a hyperloop tube because even if it's a vacuum and lower air pressure, it's going to be really hard to make complete vacuum. The biggest challenge with pushing what becomes in essence a ram down a tube is how to displace the air in front of the vehicle. In subways or rail tunnels, they build ventilation shafts to give the air somewhere to go besides forward. If you ride a subway regularly in an underground station, you already experience this to a degree when the air in the tube blows by you when a train is coming into the station.

Others covered stopping already, which is possible, tolerable, but maybe not so much fun.

I really recommend the video. It's an engineer and television host explaining the engineering challenges of developing a car which is able to achieve significantly higher speeds than most vehicles.

Not the answer you're looking for? Browse other questions tagged internal-consistency humans earth .

8
What is the highest acceleration that a normal human could safely endure for (say) 8 hours?
1
Spaceship construction for travel to an earth-like planet

1
Can a human survive getting back stripped down blood?
13
The human race can survive - if we can all cooperate
5
61 Virginis Mission Design: Long Term High Gee Acceleration and the Human Body
2
How could a person survive and then stay alive, even when they are actively decayed?
6
How long can a human survive inside a dark box?
13
Can humanity survive if all people are born females and later become males?
1
Can you survive the birth of and then occupy a nearby new born universe?