How can an optical signal be converted into a mechanical/acoustic signal without using electricity?

There are several ways to directly convert acoustic/mechanic signals into optic signals (e.g. opening/closing a shutter, or the acousto-optic effect). Is there any way to do the reverse, without using photoelectric effects or other electric effects/electricity as intermediate?

I suppose one way would be to use the thermal heating from the light to deform e.g. a bimetal, but I doubt that will work with the light intensity of fiber-optic signals and it would probably be limited to low frequencies. Or am I wrong with that?

(Cross-posted to physics.stackexchange, not sure which will receive the better answer)

edit: background: I'm exploring what a world would look like if people were not allowed to or chose to not use electricity technology. Real world science applies though.

Have a person (or trained monkey), pull a lever (or other mechanical motion) when the light turns on. It's not super efficient, and it would have a fairly low max speed, but it would definitely work without using an electric circuit.

You could theoretically bio-engineer a simplistic organism that does this type of work without all the overhead of a large evolved animal, i.e. responds to light by contracting a muscle.

Turns out that I was wrong about the effectivity of using the heat of light to recover information. It is called the photoacoustic effect, and Alexander Graham Bell already used it for wireless voice transmission in his photophone. (Thx to Philip Wood @ physics.sx)

In the photophone the voice of a speaker was directed against a thin flexible mirror which was set up to reflect sunlight to the receiver. The sound vibrations caused the mirror to flex and thereby concentrate or disperse the beam of sunlight, thus modulating the sound waves into the intensity of the light beam. Although Bell's later receivers were electric using selenium cells, his first ones were nonelectric and used the photoacoustic effect. The varying light intensity of the light beam made the receiver and the air directly next to it vibrate from varying thermal expansion. He describes the sound of one design that used a simple carbon black coated receiver as 'painfully loud' when one's ear is pressed closely to it.

Combine this with the possibility of the Higham friction amplifier or compressed air amplification, and that of chemical lasers, laser-pumped optical amplifiers and the acousto-optic effect and it looks like fiber-optic telephones are entirely possible without using electricity.

It depends on energy of "optic signal".

If energy is enough you can use a lens to "print" on some sensitive material. Think about a camera with a continuous ribbon of film moving continuously; When light is on it would impress on film; you can send Morse messages that way.

The most direct way to accomplish this is through photoisomerization. Molecules like azobenzene(shown below) can be switched between two different configurations using different wavelengths of light.

If we arrange our photoisomers in a polymer just right, we can obtain light induced deformation at the macroscale One class of polymers that does this are liquid crystal elastomers. It is also worth noting that the initial steps our phototransduction in our eyes rely on retinal MECHANICALLY changing the shape of the protein opsin. Although making a liquid crystal elastomer which can operate at acoustic frequencies would probably be difficult.

A fun way to convert an optical signal into mechanical motion is to use light triggered chemical reactions. Hydrogen and chlorine will react with each other explosively when exposed to UV light. It is not inconceivable that a carefully designed reaction chamber filled with flowing hydrogen and chlorine could be made to explode at acoustic frequencies.

There's also the photoacoustic effect, where an oscillating light signal can be used to make a fluid heat up and cool down sufficiently fast so as to make sound. Such sound is typically quite soft unless one uses a very strong optical signal. However, fluidics enables us to amplify these small acoustic signals into something much louder or capable of controlling pneumatic or hydraulic machinery. The below image taken from here illustrates how this is possible. 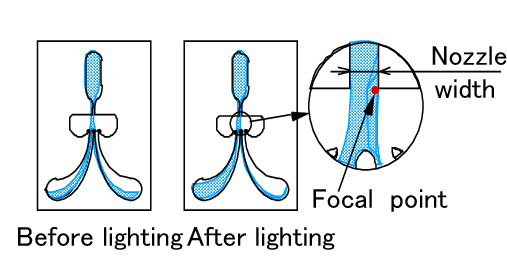 Light is focused on a fluidic amplifer causing fluid to expand and displace a fluid jet result in said fluid jet moving more fluid to one port than another resulting in amplification of the small expansion of fluid. Fluidics has been used to amplify photoacoustic signals from a 0.7 mW light source to drive a control valve for a gas chromatograph. In addition, fluidics has also been used to amplify photoacoustic signals to drive a pneumatic robot arm. Perhaps the most bizarre use of using fluidics to amplify optical signals was to make a completely nonelectric remote control system for an ICBM interceptor. An audio receiver based on this principle has been patented too, I can't find any information that it was actually built, but there is good reason to believe that it's possible. The aforementioned missile guidance system's preamplifier stage was able to amplify signals up to 5 KHz, which is sufficient for speech transmission.

Stated that once you reach the mechanical interaction the acoustic interaction is down the road (and vice versa), you could theoretically use the solar sail.

If i'm not wrong, there's a solar-sail propulsion vehicle in the movie "pitch balck". The concept is simple, the sail on the veichle is a "standard one", mill-shaped and only in a vacuum dome to avoid air friction. The main issue is that the power density (watt/m^3) that can be extracted from a solar sail is really really low, totally unable to be used as propulsion on land, in fact the only real application is for spacecrafts booster.

Plasma speakers can generate audio. And, Lasers of sufficient power and energy can ionize air to generate a plasma.

Not the answer you're looking for? Browse other questions tagged science-based technology electromagnetism audio or ask your own question.

1
In a world without electricity, can we still go to space?
19
How can I explain mind control without using magic?
18
How long can a power plant continue to generate electricity without maintenance by people?
7
Can you harness electricity without metal?
0
Can Earth-like planet to converted into a giant Tokamak reactor?
4
How can nuclear power produce -electricity- in space when energy must be converted differently?
4
How would building an acoustic amplifier into a large scale rockface work?
1
How Weaponizable Are Optical Illusions Without Camouflage?