Cooking in the vacuum of space [closed]

It's time for Ultimate Iron Chef! Cooking... in space.

EQUIPMENT: Anything that can be found in an ordinary kitchen. Utensils, electric cooker, toaster... Things like oxygen canisters and centrifuges are not allowed. You are not allowed to modify your equipment to try and make a spaceship. You do have an electric power supply.

SUPPLIES: Anything you can find in the food sections of an ordinary supermarket. Vegetables, meat, milk, bottled water...

LOCATION: Earth orbit, outside a space ship. In other words, in vacuum, 0G, though you can pick where you want to be - would this be easier on the night side, or in the day side? Up to you.

Your task is to try and cook a delicious and normal meal.

Points for sophistication. Anyone can make freeze dried ice cream. You can potentially use a pressure cooker (if you have a good idea about how to use one in a vacuum).

Easy one - take a parabolic mirror (e.g. a typical satellite dish, the one you can find in your kitchen and paint it shiny), put some heat resistant holder in the focus and there you go.

The heat in the focus can easily reach upper hundreds of kelvins (which is more than enough even for a grill) for a typical small (~1m) parabolic dish and you can regulate the temperature very easily. As a bonus, there is no air to take the thermal energy away. Add some water into an airtight (and strong) packing, and you get your classical boiled food (if fried/grilled is not for you).

If you do not have a satellite dish among the regular equipment in your kitchen, a huge metal ladle might do, or a pot cover, and you would be able to watch the TV cook.

Solar constant is about $1360\, \rm W\cdot m^{-2} $ [1] - that is (by definition) at 1 AU and outside of atmosphere (It's a total irradiation, not just inside the visible spectrum, but the maximum is in the visible spectrum anyway and polished metal surface would reflect IR and UV easily). Typical high-end mirror reflexivity can reach 90%, if we allow for non-visible spectrum and lower efficiency, we can get $500\, \rm W\cdot m^{-2} $ easily (note that for low cost, less than perfect reflexive cookers in our atmosphere and realistic weather the efficiency is very low, [2] got only 15% maximum energy efficiency). A typical hot plate consumes maybe 1 kW of electricity and is perfectly adequate for cooking (and the efficiency is likely rather low as well). That means $2\,\rm m ^2$ is more than enough to replace a typical hot plate.

Note that solar cooking is not uncommon, especially in developing countries without proper access to electricity. See [3] for a detailed description and fields testing of solar cooking in Indonesia.

A typical pressure cooker operates at 2 atm - that means 1 atm overpressure, which is perfect for vacuum - keeping the same 1 atm overpressure will give exactly 1 atm pressure in the cooker, which means the conditions for cooking are exactly what we are used at.

A microwave meal! The problem with cookers and hobs is that they always rely on these pesky things called atoms (and we are too sophisticated for those). In our vacuum of space, convection and conduction are a thing of the past! Relying on a flame to heat a metal pan is great, but you need oxygen for flames and, well, we haven't got much of that. Also the heat is transferred from the pan to the food using conduction, but our food would need to be in contact with the metal to receive the heat and this won't do because in zero G it would float off! No, that won't do...

Aha! But light doesn't use particles! (Well, arguably wave-particle duality does but those are different to the particle to which I refer.) A simple microwave will perform the jobs we need it to:

So there you have it. Space-Microwaves(TM)!

If the question specifies outside a space ship, I assumed they meant next to, or within plug-socket-and-extension-lead range (assuming the ship has a power source). Considering that we can use "Anything that can be found in an ordinary kitchen. Utensils, electric cooker, toaster... " I would say that an arbitrary power source and fuel source for those appliances is assumed but not explained.

If not, then the only power source would be the sun. Last time I checked, solar panels are not found in your average kitchen and I dare say the average kitchen drawer does not contain enough AA and AAA batteries to power a microwave for several minutes. If there is no power source, your Space-Microwave(TM) will not work.

To cool your microwave, you can take the outer surfaces off and press cold conductive materials onto the hot areas. These will take up some of the heat. Where to get those? Well, you could use the cooling element of a fridge but it uses compressed gases so that wouldn't work. You could put a large chunk of cold metal against it though. Wait, is there not a space ship? According to NASA:

Well, grab the conductive elements of a cooker (or multiple cookers) and only microwave at night time, using the freezing cold cookers to absorb the excess heat. 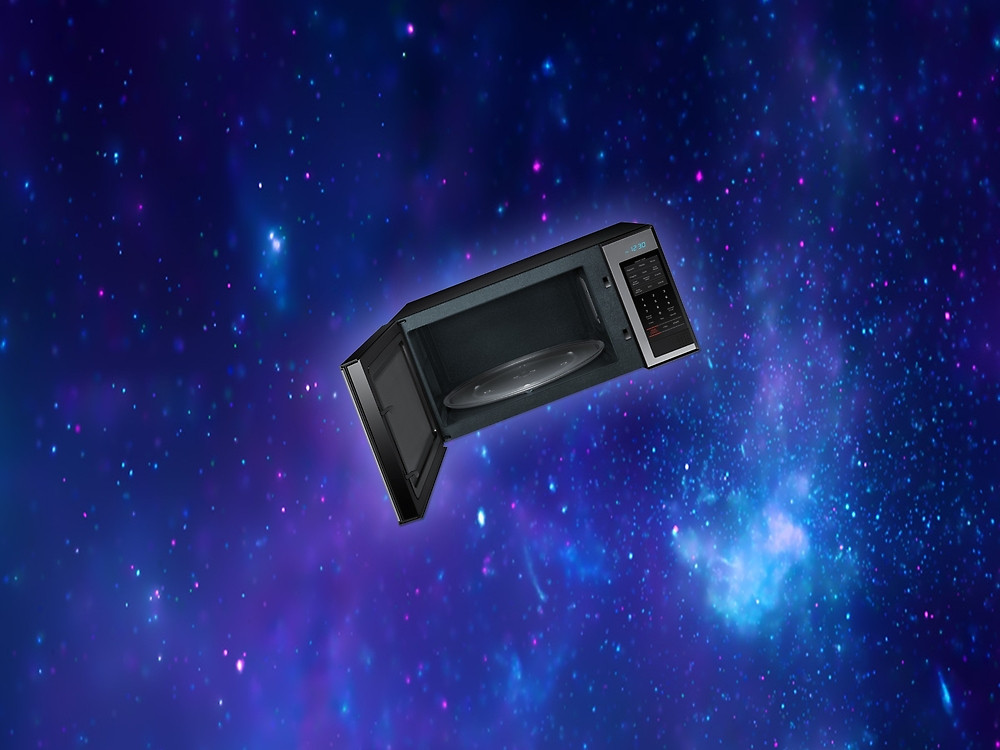 -1
How long would (dry) food in a glass jar survive in space?

27
How does a self-cleaning kitchen put away the dishes?
7
Immediate physical effects of being exposed to the vacuum of space?
23
Making cooking require split-second timing
4
Space vacuum food preservation
6
An oasis in the vacuum?
17
Can we Build a World Where Cooking is Difficult?
10
Cooking in a hyperbaric kitchen?