How can one empty a cesspit with medieval technology?

I'm building a town that only has access to medieval technology. Nevertheless, the town has its own sewage system that ends in a large cesspit. All inhabitants' wastewater goes into this cesspit.

Of course this means that the need to periodically empty this cesspit arises. How can this be done?

My problem is that as far as I know anyone who enters a cesspit will be immediatelly overwhelmed by fumes and unable to get out. I've read warnings in a newspaper that if someone falls into the cesspit the others shouldn't try to get there and save him, or else the cesspit will trap anyone who tries to save whoever is already there.

Pumps were known in ancient times already, so I suppose one could employ, for example, a screwpump (Archimedes' screw) to empty the cesspit's liquid part without poisoning the pump's operator?

But what about the solid parts (fecal sludge)? I suppose one cannot simply go there and excavate it with shovels?

I would suggest composting. Design the waste water routing (trenches or plumbing) so that they can feed into one of several cesspits, then change which pit is fed on an annual basis. After each pit's year of service, add wood shavings and leaves, then allow it to season for a few years until it comes up again in rotation. Just before you change the waste water routing, shovel out all of the fully mature and fertile compost and spread it around your fields.

It is pretty simple, and this is actually how it was done until about 50 years ago in the region where I come from, where most of the houses had no sewer at all, but only a small cesspit. The method is surprisingly similar to the one used to clean barns...

The access to the cesspit was granted via a large manhole. Once in a while through the manhole straw was dumped to absorb the liquids and also mix with the solid stuff. A man (or more) then went into the cesspit and first mixed thoroughly the straw and removed it using a fork.

The moist straw was then used to fertilize the ground of close by farms.

Being far from sealed (there was no siphon on the toilet side, and the manhole was just wooden) there was no accumulation of toxic gases, as you could confirm by walking around the place...

Actually, cleaning of cesspits and latrines was a well rewarded, if not we'll respected job since Medieval times to 19 century, you might want to consult this article:

Up to 19 century many houses in Europe had cesspool in basement, sometimes it caused wooden beams to rot and floor to collapse, as in the case of Emperor Frederik I in 1183, when he and his guests fell 39 feet down into cesspool in Erfurt Castle.

If it was dry, it is just digging out a mudpit. Good medieval work.

But if was wet they did not need to swim around in it. The medievals had dredges. They needed them to keep their ports and rivers navigable. 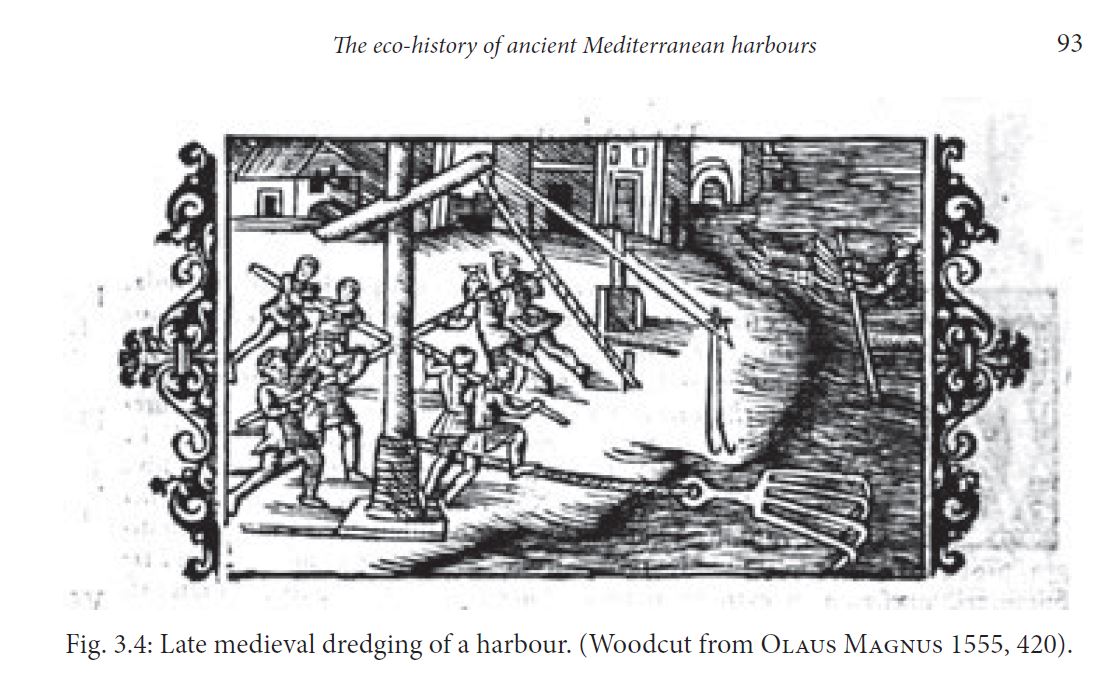 At its simplest a dredge is a porous bucket or weighted rake or plate. You get it out there, let it sink, then pull it back to dry land and it drags whatever is on the bottom up with it. Repeat. You would do the same with the cesspit. It still requires someone with a shovel and a wagon or wheelbarrow but everyone stays out of the pit.

Fumes only build up if it is sealed, we do that so that the odors aren't noticeable, in medieval times people often relieved themselves in the streets and hygiene wasn't a big thing, literally everything smelled terrible by modern standards, so not as big of a problem. Simply open up your cesspit and let it vent for a while this should take care of the worst of the deadly fumes. The people living by the cesspit aren't likely to be important enough for their complaints about the bad smell to cause any problems.

Then utilize the most common tool of the period, disposable peasants. Armed with some shovels, buckets, wheel barrows, and wagons they would definitely be able to accomplish the job. This would of course be a terrible job, prone to all sorts of diseases and ailments, not to mention the smell. This was often the job of the lowest of the low caste members of the society. Even if several peasants keel over and die in the process, just add the body to the collected material and move on.

I would recommend a wide diameter Archimedes Screw, a pumping technology (for water) already firmly established at least 1000 years before Medieval times.

When the cess pit is built, install a stand of rocks to support the screw several feet above the bottom; there is no need to empty every last bit of it.

The screw can extend as high above the ground as desired, so the waste falls into wagons, chutes, or whatever you wish. In fact, from the article:

Archimedes screws are used in sewage treatment plants because they cope well with varying rates of flow and with suspended solids.

Don't seal it and hire These Guys!

Gongfermors, Gong Farmers, Dunnykin Divers, Night men, and so on were the guys who historically did exactly this job.

The system wasn't sealed so the accumulation of gasses wasn't as much as a problem, but things were far, far from pleasant.

They would go to the cess pits and use buckets and shovels to clear out the waste products, often using boys to get into the more confined spaces.

They often worked at night. The wikipedia has a snippet of an ordinance that says they had to work after 9 at night.

As an alternate method, I remember my dad talking about slit trenches in Viet Nam being lit on fire to burn off a bunch of the nastiness, and the remains being shoveled out to use as fertilizer.

If you are too squeamish to dig out the old pit dig a new pit and use some of that dirt to cover the old one. Grow food on the newly available well fertilized ground.

Even the most picky of laborer will be willing to dig again in the old site when the new one fills some years later. Especially if you don't bother recording exactly where it was and just pick a convenient spot each time.

Sewage management goes back into pre-history, with some elaborate yet efficient systems having been developed by the early bronze age. In the levant (aka biblical cities) sewage conduits ran under the streets and a fair distance out of the towns into a common dump area called a "gehenna". The city's gehenna was far enough away that it dd not need a lot of management.