Is it realistic for an animal to not be able to be hurt by guns but be vulnerable to weapons like swords and spears and maces supposing that the users are that much stronger than humans like us?

Supposing there is defensive magic in this world and users can apply a forcefield around them that essentially acts as a barrier against physical attacks but with a certain limit. Disregarding any other type or use of magic. Is it possible that swords would have a better chance to breach said barrier than a bullet? (To help, imagine that the barriers act like plate armor just without hindering the movement of the user and is essentially weightless.)

The main difference between the two questions is that in the second, any attack that gets through is enough to remove the combatant from the fight. While in the first, animals can take much more damage before succumbing to their wounds, requiring either precision attacks in vulnerable spots, (either pre-existing due to their anatomy or created by an attack, if said attack cannot be repeated many times, e.g. limited ammo) or by repeatedly creating new wounds, supposing breaching their skin is relatively "easy" with your weapon of choice.

On your first point: Most bullet proof armor is definitely not "Stab-Proof". Kevlar is a weave of fabrics that will absorb the impact of a bullet by distributing the impact force over a greater area. However, a knife point is narrow enough that it can cut enough of the fabric threads to create a hole and can lead to further slicing once the initial penetration action. If this were to occur in nature (why not, life is weird) than yes, a sword of some type would be more efficient then a gun. That is not to say, though, that guns don't work. Kevlar does have a limit to its effectiveness and people can get substantial bruising if hit by a bullet, even if the impact is limited to the vest (I've even see denting occur, rendering the entire vest useless and forcing the user to get a new one). I can imagine a scenario where the animal could be shot with enough ammo available, but I think it will either take something more than a Wild West Era gun OR armor piercing rounds (I'm not sure if they existed in the era you're looking at).

As for Armor, it's harder to say. Plate Armor evolved to defend against Claymores and other European style swords that were big, heavy, and relied on being massive and sharp. A rapier (or other narrow stabbing style sword) would be more effective, as there would be gaps that were smaller (chain mail was the block for this). Japanese swords, conversely, were designed to be light slashing weapons and most Katana use wasn't designed to cross blades (I recall. At any rate, there is a reason why we don't send troops into combat in Knight or Samurai armor anymore, so I would say a gun could probably be more effective. (Consider the Back To The Future III showdown, where Marty had a hidden pan to stop the bullet... in both the movie within in the movie that hinted it and the actual movie proper, the pan was there to take one shot, tricking the bad guy into believing the hero was dead, long enough for the hero to get a jump on them. Had the villain shot twice, both uses would have died... and that assumes it didn't find it's way into a mythbuster's episode to begin with).

TL;DR: Swords vs. guns on Beasties, possibly. Swords vs. Guns on magic armor... Um... I'd lean to guns, only because Plate Armor wasn't meant for bullet stopping.

In the Dune series people had personal force fields that produced a force proportional to the speed of the object trying to penetrate it. Lasers and guns were useless outside the field. But in hand to hand fighting a knife could be pushed through the field slowly. (Presumably a gun could as well but the knife made for a better story.)

Secondly, every life form has to have "ports". Places where materials have to enter and exit. And some of the sensors have to be exposed as well, like eyes and ears. The latter typically have bone behind them but it is also typically much thinner. A sword could penetrate this bone and be somewhat self guided by the surrounding bone to the processing center behind it. (Note these nerves are typically short for bandwidth reasons.) During the medieval times, people would knock knights off their horses, roll them onto their back and push sharp objects through the eye holes to kill the knight. Gruesome but effective. A gun would do similar damage as long as the person had the discipline to not use it until stuck into the eye hole. But how many people would have that discipline.

First question: Yes, swords could be better, if the animal shows different behaviors depending on the distance between it and the human. It could go into an all-defense mode, if said distance is bigger than his own attack range, rendering guns and bullets useless, as they can't get through its scales or whatever. But as soon as you come close enough it will attack you, while it ignores his defense. I imagine swords to be the better weapon for your own defense, before you strike and kill the prey with it.

Second question: Yes, swords can be more effective, if the shield has limited duration on constant attacks. Just say the shield can fully recover in the short amount of time between two bullets, but breaks under constant pressure of a sword.

Is it realistic for an animal to not be able to be hurt by guns but be vulnerable to weapons like swords and spears and maces?

Consider the animal equivalent of a tank. Say, a crab.

Its body would have a thick slanted carapace on which bullets would tend to ricochet if not coming in at the perfect angle. It would have many thin, armored legs which would be rather difficult to aim at with a firearm.

Let's say the armor evolved as a result of a predator having a big, strong jaw. Like a T-Rex...

A big mace would be effective at cracking its armor. Even if it does not crack, the blunt force trauma could be enough to cause internal damage. War hammers follow this principle. When someone wears full plate including helmet, a sword won't puncture or slash it, but hit the guy on the head with a heavy mace, and you don't need to actually go through the armor. Check out this oldskool armor-piercing tool. Both sides look equally brutal. 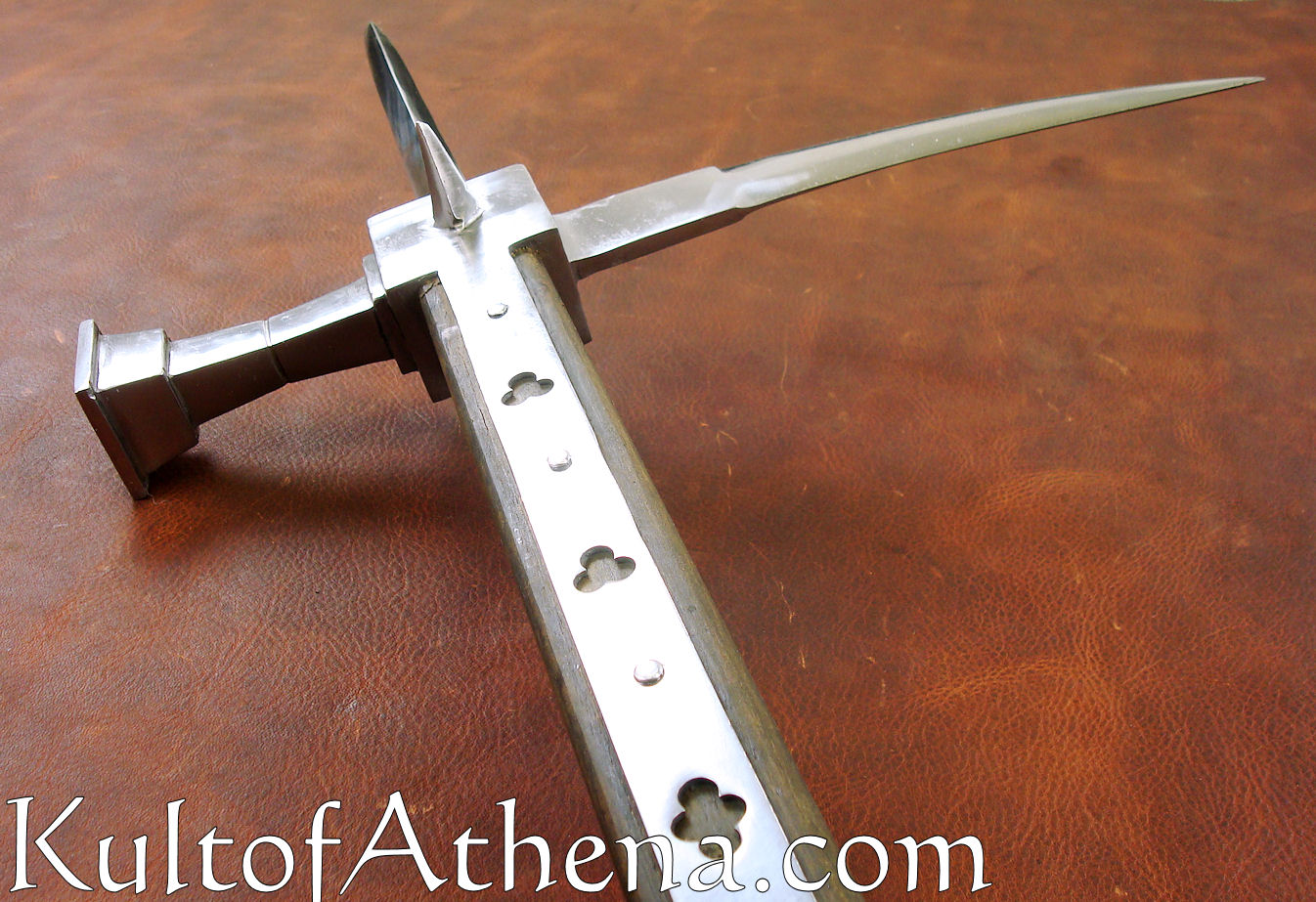 Note that the pointy end will tend to hit armor at the optimal angle (ie, perpendicular) to avoid glancing, and it has the weight of the hammer behind it to push it in. Plus, it has a pointy bit on the top, in case you need to impale something by thrusting.

Back to our crab. You could slip the tip of a spear inside the joints. Or a sword, but the spear would have more reach. Reach is always good when facing ravenous beasts.

Now, another wicked creature. Say, a huge worm or snake. It lives in bogs infested with large blood sucking bugs, and instead of scales, its skin excretes a very thick layer of mucus. Bullets would penetrate this, but not very deep enough unless using a high powered rifle (think ballistic gel). However, a blade could.

Next would be swarm creatures. When attacked by a swarm of ten little buggers, a shovel would be a lot more effective than a gun loaded with only six bullets.

So, we can look at some ways to either nerf guns or improve swords in this scenario. Let's start with the guns.

For your swords to be better, one way I propose that fits with your second question regarding magic shields would introduce an 'anti-shieldium' material. You could say the inside of your swords could be filled with a core of 'anti-shieldium' which helps it to penetrate the magic shield. This 'anti-shieldium' could be expensive (which is why it's not wasted in bullets), or a brittle crystal that wouldn't survive being shot out of a gun. Also, a certain amount might be necessary to deflect the shield enough for an effective hit.

Not the answer you're looking for? Browse other questions tagged reality-check magic combat or ask your own question.

0
Swords Becoming Effective Weapons
4
What are some practical weapons for slaying monsters?

9
Would magical curses be more effective at curbing violent crimes than prison time or death penalty?
9
Would centaurs shoot more accurately than a cavalryman from horseback?
7
Man-portable weapons for post-disaster Arkansan troll hunters
6
Can using zombies for labor be more cost effective for an employer than a living worker?
13
How to realistically implement magic-users in medieval warfare?
4
How would organisms adapt to survive darkness beasts? [expansion to my old question]