How do I explain the formation of my world scientifically?

For my science fantasy story, I need a particular setting for my world. I need a planet (Earth or earth-like), habitable and with complex life forms like our planet. However, over time, this planet gets tidally locked with another celestial body (either a moon or another planet). I don't mind it covering millions of years to achieve this result, provided it doesn't affect the lifeforms drastically (at least a handful of them). So how should I proceed to building this world to make this possible?

The final version of my world would be a planet/moon tidally locked with a celestial body which occupies substantial space in the sky, and with the day-night cycle of around a week.

There are three probable scenarios I could think of to achieve the result:

1. Our current Earth gets locked with its Moon

I've thought of Earth getting locked with the moon, but this option does not seem feasible. The Moon seems to drift away from the Earth gradually, while I'd want it to get closer to Earth for it to look larger in the Earth's sky. Even if the Earth gets locked with the Moon naturally over millions of years, the day-night cycle would be nowhere around a week. Meanwhile, the Sun would turn into red giant and engulf both Earth and the Moon, rendering the entire process useless. If somehow the Moon gets closer to Earth without destabilizing its orbit with each other while simultaneously drifting away from the Sun, this scenario could work to achieve the desired outcome.

2. Locking Earth in Jupiter's orbit as its Moon

Locking Earth in Jupiter's​ orbit is also an option, but still not feasible. A series of highly unlikely but possible events, (like passing of an asteroid in Earth's orbit, in perfect planetary alignment) could make Earth drift out of its orbit and get captured by Jupiter. However, I suppose, this process would have apocalyptic effect on the Earth's lifeforms. If somehow this entire process happens in a way such that it least affects the habitability, and the new Earth continues to support complex lifeforms as it does now, this option seems most viable.

Which of the above scenario sounds realistic enough to be possible?

Is it even possible to achieve any of these scenarios (hypothetically)?

I prefer to get this outcome by manipulating the natural behaviour of celestial bodies even if it is highly unlikely to happen, but possible. If not, I'd settle with human intervention to make this possible. I'm really not considering handwavium at this moment, but I'm open to ideas.

I'm not looking for hard numbers, but just a way to explain my world scientifically.

Let me review the three options:

You've asked for an explanation as to how something could really happen without the consequences of it really happening. As you can imagine, that's not possible. I prefer to give positive answers (I've given a few too many negatives lately), but I can't find a way to do that here. Let me help you understand.

Premise: I have a goldilocks planet. It's just the right distance from the sun, the right mass, the right orbit, the right rotation, etc., to permit lush complex lifeforms.

From this starting point you want to change the goldilocks parameters without losing the lush complex life on the planet.

1) The planet's rotation slows to create a week-long diurnal cycle. Planets warm up the longer they face the sun. As I mentioned in a comment, the outcome would be to burn the life during the day and freeze it at night. The cockroaches might survive the temperatures. But a planet's rotation also affects its magnetosphere, and therefore the Van Allen Radiation Belts. That means even more solar radiation and the possibility of the nastier forms of radiation.

2) Tidal locked to the sun has all the problems of (1) in spades, but doesn't create a diurnal period. It doesn't meet your needs.

5) Assume the planet survived the transit and the massive object is gravitationally far enough away from the sun to permit a stable orbit, what about self-heating in the planet, would that preserve the life? No, it would destroy the life dependent on solar radiation and a stable geology and evolve new life to take its place. Note that the planet would be tidal locked as most moons are due to the mass ratios.

I could go on, but there isn't a path to happiness based on reality. Given that your question allows for millions of years to stabilize whatever event occured (during which time significant evolution is occuring and the life forms you're trying to protect won't be what they were in the beginning anyway), I wonder if the need to justify the astronomical conditions of your story is even necessary?

If the physics behind the story are more important than the story, then the story must change to meet the demands of physics.

If the story is more important than the physics, then ignore the inconvenient physics and tell the story. Let me explain....

Consider the life-bearing moon in Avatar and Star Wars' forest moon of Endor. They're myths. They can't exist. They can't depend on reflected light from the parent planet because there is no orbit that wouldn't bring it into the light of the burning sun. They can't rely on the sun because there is no orbit that doesn't take it out of the sun's path and into freezing darkness behind the planet. No meteorological condition that fixes the problem will work because it's guaranteed to cause problems when the moon orbits to "the other side." (If I'm wrong about this, please correct me! I'd love to know how it could be done, but I don't see it right now.)

The fictional moons work in their stories because the stories are so good we, the reader/viewer are willing to suspend our disbelief concerning the story's premise.

Just change the way that the collision happened that it supposed to have formed the moon.

The giant impact hypothesis, a.k.a. Theia impact is the current favorite hypothesis for the formation of the moon. Had the mars-sized impactor hit at a different angle, instead of speeding up the earth's rotation to 5 hours per day, could have slowed it to a near standstill if that is desired. Pre-Theia rotation rates are pretty much unknown, but often supposed to be perhaps 12 hours.

You can then easily explain tidal locking in a relatively short time, regardless of which body is being locked to by changing the impact to meet your needs by the simple method of making the post-impact rotation rate match what you need for tidal locking.

Habitability would be a function of the end result of everything associated with a tidally locked earth.

Given a slow spin rate, you would not be expected to have a significant magnetic field, so long-term atmospheric loss is a real problem due to solar wind, so you need a star with much less solar wind. This is also very likely similar to the need for a star with very limited solar flares, as needed to protect against the effects on earth without a magnetic field.

Sol is actually a particular stable star, most similar stars have mega-flares averaging about 1 per hundred years (much larger than seen on earth in modern times). For an even quieter star, you might want something closer to a red dwarf, though the habitable zone is much closer to the star.

Tidal locking to its own moon is the interesting option to me, though I do not know if this is really viable in the long term, I think is is though. It does imply a very close moon if you want a relatively fast rotation rate. You could even have the moon orbit in less than 24 hours and still be outside the Roche-limit, very impressive night-time and day-time viewing as the moon would be something like 15-30 thousand km away depending upon your tuning requirements for a fast rotation/orbit period. Under these conditions, you do not even have the problems with a required slow-rotation tidal lock. This gets my vote as the best tidal-locked outcome, as it is rare in science fiction.

You would also have total eclipses on daily basis, so to compensate for the loss of average solar flux, you need earth a bit closer to the sun to keep the same average temperature.

The barycenter (combined earth-moon center of gravity) would perhaps be more important as the earth wobbles around it much more frequently. Don't know the what this would imply though.

I feel like option number 3 is a good choice. Maybe if you want the planets to be locked, use a really large chain! In my example below, I imagine the one planet decided to take control of the other planet so they built a large chain locking them together. The orange planet you might think is the agressor, but they are a mostly peacefull peoples who just want to be left alone and now the blue planet (A hostile tribe known only as the "Kawarthas" are taking advantage of that. 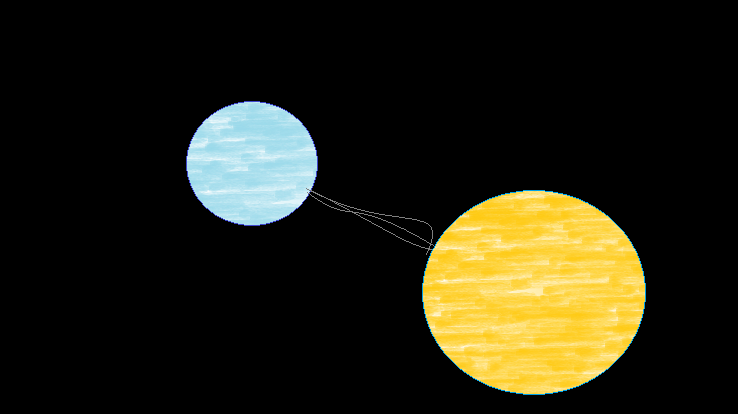 39
Habitable moon of a gas giant: working out the sizes and distances
22
Realistic sky of an Earth-like moon orbiting a gas giant (length of day and size of celestial bodies)
6
If our moon had an atmosphere, could it have seasons?
0
How big could a moon be before its orbit became too unstable or tidally locked to its planet
6
Multiple moons but only one of them is tidally locked to its planet?
1
The major effects on the habitability of exomoons orbiting this Brown Dwarf
4
Tidally Locked Planet with no Oceans
3
Could a "gentle" collision of a planet into another cause tidal locking and still support life later on? What other side effects could appear?