So I am working on a concept for a location, wherein a sort of oracle will exist. This oracle will in no way be super natural rather the strange behavior of the oracle (a human for the sake of the question) will be the result of interaction with some naturally occurring chemical/compound.

What sort of naturally occurring phenomena could make this scenario happen? Answers should include both the compound and its effects as well as any setting specific requirements to make it possible.

The easiest solution: the brazier

Caves need light, and the simplest solution for light is fire. Braziers were regularly used in the ancient world not only for fire, but for cooking. There is an impressive list of things you can cook that would give supplicants in the consecrated chamber all kinds of visions ... especially if the High Priest knows which roots/powders/plants to drop on top of the burning coals. These include:

Now, to be fair, some of the items on that list are critters, not plants. But, high priests do get hungry, don't they? Everything on the list is a hallucinogenic. Some also induce convulsions. If you'll forgive me, the list is long enough that I'll let you go to the source to discover specific properties.

Our cave is high on a volcano. A lava river exudes from the base where any one of these plants grow. The plants burn, and a natural chimney takes the smoke up to one of the cave chambers.

However, this is a really capricious solution. A bad year, not enough rain, yadda yadda, I doubt this would be a predictable solution.

Which stinks, 'cause that would have been the simplest way to get to where we want to go.

What if one of the more feathery or viney of the plants listed above were prolific in bog land many bazzilions of years ago... and over time the volcanic mountain that contains our cave covered the bogs with, well, dirt. This would create a seam of organic, combustable material containing hallucinogenic components. And that seam was exposed in the consecrated chamber.

First discovered by the first high priest who entered the cave on a vision quest looking for answers to life, the universe, and everything (it can't be 42 as that's not evenly divisible by fingers and toes) and, of course, he had a torch to light his way.

He camped in the chamber and enjoyed a nice meal of dried berries and fish, then slept. The torch was conveniently placed by the seam. And sometime in the middle of the night the very first high priest met his god.

Unless you can get naturally occuring Nitrous Oxide

But laughing gas might not be the effect you're looking for!

I find it unlikely any of the following (other than the ethanols/ethelynes) can occur naturally... but maybe. I found the list here, on page 10.

But, it has happened before

Concerning the Oracle at Delphi...

The region's underlying rocks turn out to be composed of oily limestone fractured by two hidden faults that cross exactly under the ruined temple, creating a path by which petrochemical fumes could rise to the surface to help induce visions.

Easy. Your cave can have a natural ethylene or methylethylene leak.

For at least 12 centuries, the oracle at Delphi spoke on behalf of the gods, advising rulers, citizens and philosophers on everything from their sex lives to affairs of state. The oracle was always a woman, her divine utterances made in response to a petitioner's request. In a trance, at times in a frenzy, she would answer questions, give orders and make prophecies.

This is not a chemical but otherwise meets all requirements. Plus it is cool. Infrasounds are very low frequency sounds below the level of human hearing. We do not hear them but we can perceive them, maybe, sometimes. All sorts of strange perceptions are attributed to infrasound including seeing ghosts, unexplained feelings of fear or anxiety, nausea, and even physical vibration (presumably caused by the sound waves shaking the body).

Infrasound definitely happens in caves. Sounds can be produced by natural air movement through the caves, or sounds can be augmented and altered to bring out infrasonic components. It has been proposed that caves with these properties are the ones that were used for cave art and ancient ceremonies. People could tell something otherworldly was happening there. Some Neolithic tombs have infrasonic properties - whether intentional or accidental is unknown. Regarding Maeshowe a mound in the Orkneys dating to 2700 BC

But perhaps more incredible is the idea that infrasound – sound below the ability of humans to hear – generated in the cairns could alter the mental states of those participating in ceremonies.

The principle of "Helmholtz Resonance" - the phenomenon of air resonance in a cavity – was found to apply to a number of prehistoric cairns.

The most commonly-used example of this phenomenon is the noise created when blowing across the neck of a bottle. Maeshowe, for example, shares the same basic structure as a bottle - an air filled chamber connected to the outside world by a long, narrow neck.

To create this effect, the users of the cairn had to create a sound that was at the correct frequency for the dimensions, and design, of the chamber. The larger the chamber, the lower the pitch required to create the effect and, therefore, the slower the required drumbeat.

In Maeshowe, a drum was used and the researchers discovered that the correct frequency was 2 hz. This is an "infrasonic frequency" which means that, although inaudible to humans, it can be felt as distinct physical, or psychological, sensation.

Test subjects reported the feeling that sounds were emerging from inside their head and body. They experienced feelings of dizziness, nausea, headaches, flying sensations and also that their pulse-rate was being affected.

Dr Watson suggests that prolonged exposure to these "sounds" could have had a profound effect - an effect that Neolithic man could only ascribe to the supernatural. 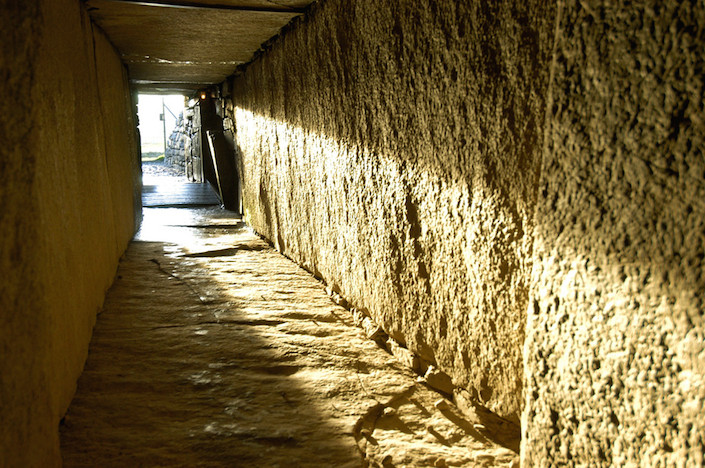 The ergot fungus can cause those who are exposed to have episodes that are similar to someone who has taken Lysergic Acid (LSD). Convulsions are also common.

Here are some problems with Ergot that you might have to finagle to get to fully fit your criterea:

1) Ergot Grows on wheat and other cereal grains like rye. It's not going to thrive on bare rock in a certain part of the cave, all on it's own. How to make it work, though, is to have the Oracle grow the grain in her own small, Holy, private garden. since she re-uses the holy seeds, this might keep the infection going indefinitely, and might help prevent the spread to other farms. That will keep her constantly exposed

2) Ergot needs to be ingested. This one is kind of tricky, but I see a possible way to work around this. First is to handwave slightly. Ergot is a fungus after all, and if you make it's spores airborne, problem solved. Just store the grains near to your "holy area" and give it a draft to carry the spores.

3) If you decide to go with either ingestion or inhalation, you could lead the reader to believe the phenomena is location based rather than something eaten by making your Oracle a person of nearly extreme fixed habit. Get up, brush hair into wild state, eat contaminated grain, go sit in front of the cave and meditate for 3 hours to receive visions from the gods. Eat meat brought to you by kindly people from the village that is not contaminated... Have them get extremely angry when this routine is disturbed. This kind of fixed behavior pattern could lead the Oracle to believe the place was special, not the diet.

4) In order to keep the effect 'localized' to that one spot, you may have to handwave just a little more, and have the effect last for just a couple of Hours.

There are several different varieties of Ergot, so the suggested handwaving won't really be all that bad. A little hallucinogenic fungus and a very fixed routine gets your oracle acting weird on the regular.

1) How about the lack of a compound, namely oxygen?

Volcanic gases, for example carbon dioxide, can be found in certain caves. Another possibility would be for example a nearby swamp. It might even be enough if they also make wine there - CO2 will form and they will have trouble getting enough oxygen.

This is really dangerous, but maybe your oracles have done this for quite some time and know exactly how long they can stay wherever they need to be before they can no longer handle that anymore.

This could further be enhanced by the fact that those people really believe in that stuff. If they really let go and go looking for such a "religious" experience, even a slight alteration in oxygen concentration might do the trick.

2) Another option though would be mold. There are quite some fungi that can be found in caves. Their spors can have an effect on humans as I know from personal experience. So in your particular cave, maybe isolated from the outside world ecologically for quite some time before the oracle people showed up, we find a magic mushroom that just happens to produce a particular substance, just take any - it doesn't really matter. So your room has a nasty mold underneath that makes people hallucinate.

Not the answer you're looking for? Browse other questions tagged science-based geology pharmacology or ask your own question.