Is my biome placement realistic? [closed] 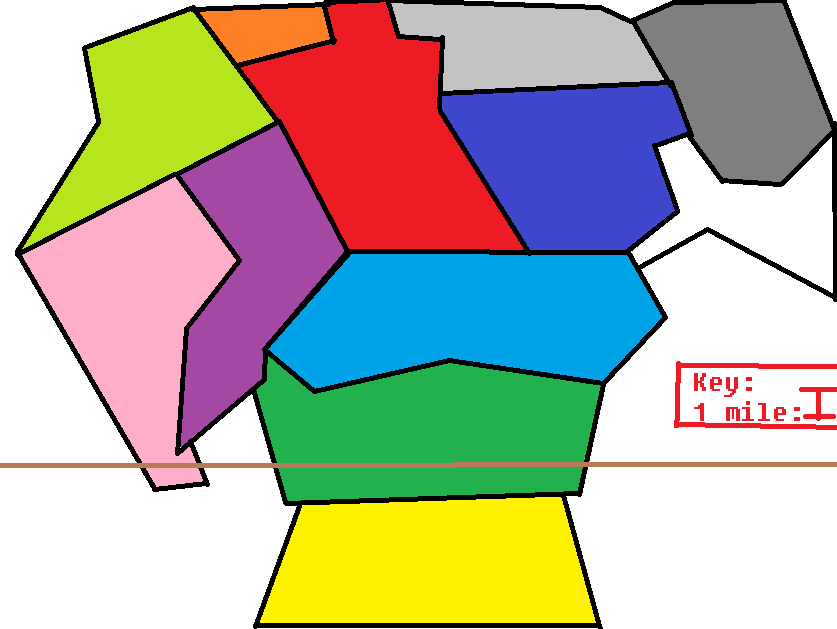 (Up is north) Color key:

White-wasteland from nuclear warfare in past

Red-area where surrounding biomes have drifted in, but is mainly a metropolis

Pink-coastal area with forest in it's eastern portion

The brown line is the equator. The key in the image shows how long a mile is. The orange and grey areas are a mountain range that spans all across the northern border of my "kingdom". Other than that, the rest of the land is relatively flat. An ocean is to the west. South, east, and north is all unexplored.

As my title says, is this set up realistic. My main concern is that the different biomes are too close. The planet is sames as earth, simular star, but a smaller moon.

This setup isn't too bad (there are plenty of video games out there with less realistic biome configurations than this), but there are still a few things I find odd.

1. The placement of your city/cities

As I understand it, the light blue biome is all one city, and the red biome is either a second city or an extension of the light blue city. However, looking at the surrounding biomes (mountains on two sides, jungles and forests on the other two), this doesn't seem like a very logical place for such a large city to have developed. Especially when there's a nice coastal area only a dozen miles to the west, that seems much more suitable. I'd move your city over there, next to the ocean, and add a large port and/or dockyard on the coastline.

2. A jungle next to a desert

Your intuition is correct here. These biomes are too close, and it would break my immersion as a gamer to go straight from a jungle into a desert. You're better off placing your desert near your mountains; mountains act as a rain shield, stopping water from reaching the desert and leading to its arid climate. You'll also want at least one river flowing from your mountains to the sea (preferably, through your city).

This is right in the middle of your mountain range. It seems like a very odd target for a nuclear strike. I don't see why this particular area would have been nuked, and not the large city/cities only a few miles away. At the very least, you'll want to explain it within the game's backstory.

I feel like this is an obvious one, and that the boundaries on your map are just rough examples that will be made more precise when you create the full version for the game, but I might as well note it anyway. Real coastlines curve and meander all over the place, and aren't ten-mile-long straight lines like you've drawn here. This question has a few tips for creating realistic coastlines, that may come in handy for you.

First of all, I'd consider the difference between "realistic" and "plausible".

Given the medium, you're already compromising on scale and so realism may be out of the question. But by aiming for "plausible" you look to satisfy some simpler criteria - primarily, does the structure of my world meet the expectations/assumptions of the player?

The first thing that jumps out at me is Jungle to Desert. That seems like a jarring transition to me. It's a meeting of two extremes - wet, dense with flora and fauna suddenly meeting dry and sparsely populated. I feel there should be some intermediary transition there.

Your other natural biomes are plausible enough - though you might want to consider the other end of your latitudinal scale - the north pole. Your cold areas seem to be cold due to altitude and that works, but it's hard to get a sense of the effect latitude will have.

I think you could probably revise your constructed biomes. Most metropolises (metropoles?) are either coastal, or on a major body of water, and require arable land to support food production, so consider where a city would firstly be situated by its settlers, and the factors that will promote continual growth.

In tandem with that, what was your wasteland before it was decimated? It would need to be something worth targeting - presumably another city, and so you ought to consider it's merits for prosperity too.

12
Single biome (hot) desert planet, possible?
9
Are my deserts accurately positioned?
15
Placement of redundant containment systems?
1
How plausible are the terrain and land-forms on my fantasy map?
16
Dragon forelimb placement
4
Looking for a review of my tidally locked red dwarf planet system specs!
2
Does my climate map work?
2
Advice on the placement of volcanoes on land
6
Is my biome/climate map realistic?
3
Reality Check on Forest Placement