Are moons always the same colour?

When viewed from their planet, are moons always the same colour as ours? Or is there a variation? What other colours might be possible and what causes the differences in colour?

More or less they can be of any colour.

The colour of the moon from the point of view of someone who is in the planet is determined by four factors: The moon material, the atmospheric composition, the sun colour and the observers eye sensibility.

So you can combine each of the three factors to create the colour you want.

About the colour of the moon, you can search for mineral pigments to found many pigments (colours for your moon) that are more or less naturals. For example you have: lapus lazuli for blue, iron oxides for red / ochre even green (see http://www.earthpigments.com/sof-green-pigment/).

I found a page in which you can find minerals by colors: http://webmineral.com/help/Color.shtml

You can see a link about what animals see in following link http://www.colormatters.com/color-matters-for-kids/how-animals-see-color.

A satellite colour is the combination of

Since there are blue, white, yellow, orange and red stars, that's a lot of possibilities.

With only our own Sun (orange), and no atmospheric filtering (since these photos are from space), we have these: 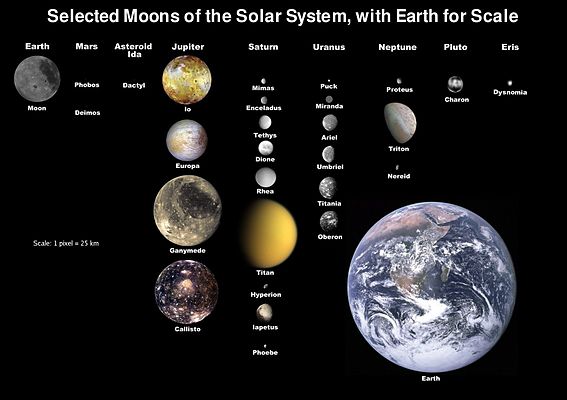 I'd think much variation. Our moon is a pretty barren rock with some lava flow colouring it (lava flow is the dark spots. The other side of the moon mostly lacks this and appears much more solid white apparently).
a couple examples:

IO (moon of jupiter), would appear very yellow in the sky due to it's sulhpur composition.

Europa (another jupiter moon) is mostly ice and it's colour would be more white along with a red center.

Tethys (saturn) has a yellow / sand colour to it.

A good portion of moons will look barren as ours, but there can easily be colour variations from simple make-up. Most of these pics can be readily found on google.

Not the answer you're looking for? Browse other questions tagged space moons .

14
What effect would three moons have on ocean/landscape formation?
9
Predicting lunar eclipses with multiple moons
12
Can a planet's moon rise at the same time every night?
0
Planet with two moons and rings? Is it possible?
9
Feasibility and consequences: the cosmic dance of twins habitable moons
8
Gaseous moons: Are they possible?
3
Calculating the conjunction of more than two moons
1
Moon-moons of moons of rogue planets
3
What would be the most likely compositions of the red and blue moons to so almost uniformly reflect their colours?