I want a lake which contains a crater of active volcano at the bottom, which the volcano has a lava lake and the lava is still red hot in liquid state, just like lava lake above water on Earth. Is that possible?

Lava has a temperature of about 700-1250°C. Water's critical point though is about 374°C. Meaning that water coming into contact with the lava lake will become a very hot (~1000°C) supercritical fluid, if the pressure down there is sufficiently high. 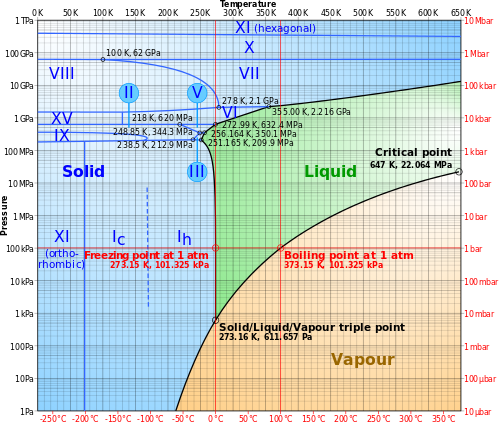 Assuming the supercritical fluid is dense enough, it will not float to the top of the (water) lake. Which would mean that the lava will not be cooled through convection and will remain a red hot fluid indefinitely.

Hotter water staying at the bottom of a "lake" is actually something that is used for storage of solar energy.

It's kept at the bottom by having a higher concentration in salts. Apart from salts you'll need strong pressure at the bottom of the water lake, meaning that gravity needs to be very high or have a very deep lake or have your planet surrounded by very thick atmosphere:

Images posted under fair use.

Lava in its liquid state is always red hot. The red hot is actually caused by blackbody radiation and is a side effect of any object hot enough to melt rocks.

However, objects that hot cause water to spontaneously boil, which cools the outermost shell to a sub-red-hot level.

Problem is it would immediately boil the water which would then be replaced with more water. You would be constantly transferring heat to the oceans which would be harmful if unchecked. I believe this is to some degree overcome by Mid Atlantic smoking stacks because water boils at a far higher temperature under pressure but even there only as high as 400°C

You could cap your lava with a generous bubble of pressurized gas which at depth was more dense than water. Xenon could work.

Xenon is also a phenomenal insulator, with one of the lowest heat capacities of any gas. Other noble gases are used for double and triple pane windows because they are cheaper. The insulating property of this deep bubble would reduce heat transfer from lava to water.

If the xenon adjacent to the lava gets hot enough from the lava then its density will decrease lower than water to the point where it can float in water. If this happens you would lose bubbles of hot xenon to the overlying water. But the cool thing (so to speak): as the bubbles ascend, they cool in the water and when cool enough, they will stop ascending and drop back down. So this deep pool of xenon would have a lavalamplike fountain of rising and falling bubbles over it.

Benefits 1: Radon is denser so bubble does not need to be as deep underwater.

2: Radon has even less thermal conductivity than xenon.

3: Speaking to @Donald Hobson: radon like xenon will be lost to the overlying water. But radon could outgas from the volcano, replenishing the bubble. Radon is a decay product of uranium and other heavy elements and is generated in the earth crust; buildup of radon in basements and other structures can occur and so buildup of radon over a conduit through the crust (the volcano) is very plausible. In fact one would predict this should actually happen and radon should be present around volcanos.

So: a yellow glowing highly radioactive bubble of radon, flickering violet with internal lightning, fountaining up and falling back, overlying a pool of molten lava.

I think we are here talking about subaqueous volcano and not submarine volcano.In the subaqueous volcano page, there is an example given which could interest you : the White Horse Bluff, a volcano which was under a lake, about half a million years ago. And according to the article, your lava lake wouldn't really exists : instead of a calm, red lake, there would be two phases. First, the water will quite fast solidify the surface of your lava lake. Second, it will erode it, and infiltrate the still molten interior of lava, causing violent explosions and exposing more lava.

You would really need very hot and very fluid lava to get a phenomenon of convection, since the water cool your lava pretty fast !

In such conditions, water would be changed in a supercritical fluid, where distinct liquid and gas phases do not exist.

Not the answer you're looking for? Browse other questions tagged reality-check volcanoes lava or ask your own question.

3
Would an deep sea lava river be feasible?
1
How would a noble gas lake form on an earth-like world?

10
Is a mountainous crater filled with fog realistic? Ways for a species to penetrate the fog?
4
Is a volcano civilization possible?
0
Is there anything that would be similar to a safe lava Venice?
15
Considerations for a Dwarven Volcano City
8
Could water be separated from a mixture by natural condensing/freezing?
7
Stopping a Volcano
3
Would an deep sea lava river be feasible?
4
Could Volcanism Provide a Large “Heat Oasis” in a Polar Desert?
3
Lava projectiles