Designing a map for a fictional city

I am in the process of beginning to write a fictional book. The book will be set on present day Earth however I want there to be a fictional city.

In my head, I have decided the name, that there will be a river and possibly a coast.

I just wondered what is the process of designing a map for the city?

I have tried starting to draw one, but it is hard to get a realistic scale or size or even where to start!

So in summary: Start with a core, and based on your answers to the questions above, plus whether it's a port, grow it out. In practice, I would look at a dozen or so cities that are similar to what you have in mind, pour over old maps, and go from there.

EDIT: In terms of placement, you can be rather vague. In Eric Flint's 1634, Grantville is a "typical" West Virginian town. Gotham is a blend of New York and Chicago, never clearly placed on a map. If you wish you might as well make up the river name too, but state that it starts from such and such mountains, etc. My favorite fictional city, Ankh Morpork, is at the mouth of a vast river going into a major sea.

I have been drawing fictional maps for the last 20 years. I am currently busy on a project city that has an estimated population of 2,000,000. I agree with all the above posts. I used to do them by hand, but now I do them by CAD. My last few hand-drawn maps were done on some square paper; I pulled out a double A4 sheet (I'm in South Africa, and we use the metric system) and used the grid. Usually I draw on a scale of 1:20000. The map below I drew as a part of my project. Feel free to use it and/or comment on it. The scale of that map is 1:50,000. One small square has a side of 50m.

Anyway, here are my general steps:

Here below is one I prepared earlier... 0ED = Kindergarden, OAH = Old Age Home, I have 5 different religions, the 'club' symbol on a green background is the cemetary, Green anchors are marinas, Red anchors are water based emergency services, blue anchors are ferries. Psi-Omicron-I (simulate a fork, plate and a knife) HS = Hotel Small. 1000 MMF = 1000 employees in a medium manufacturer. 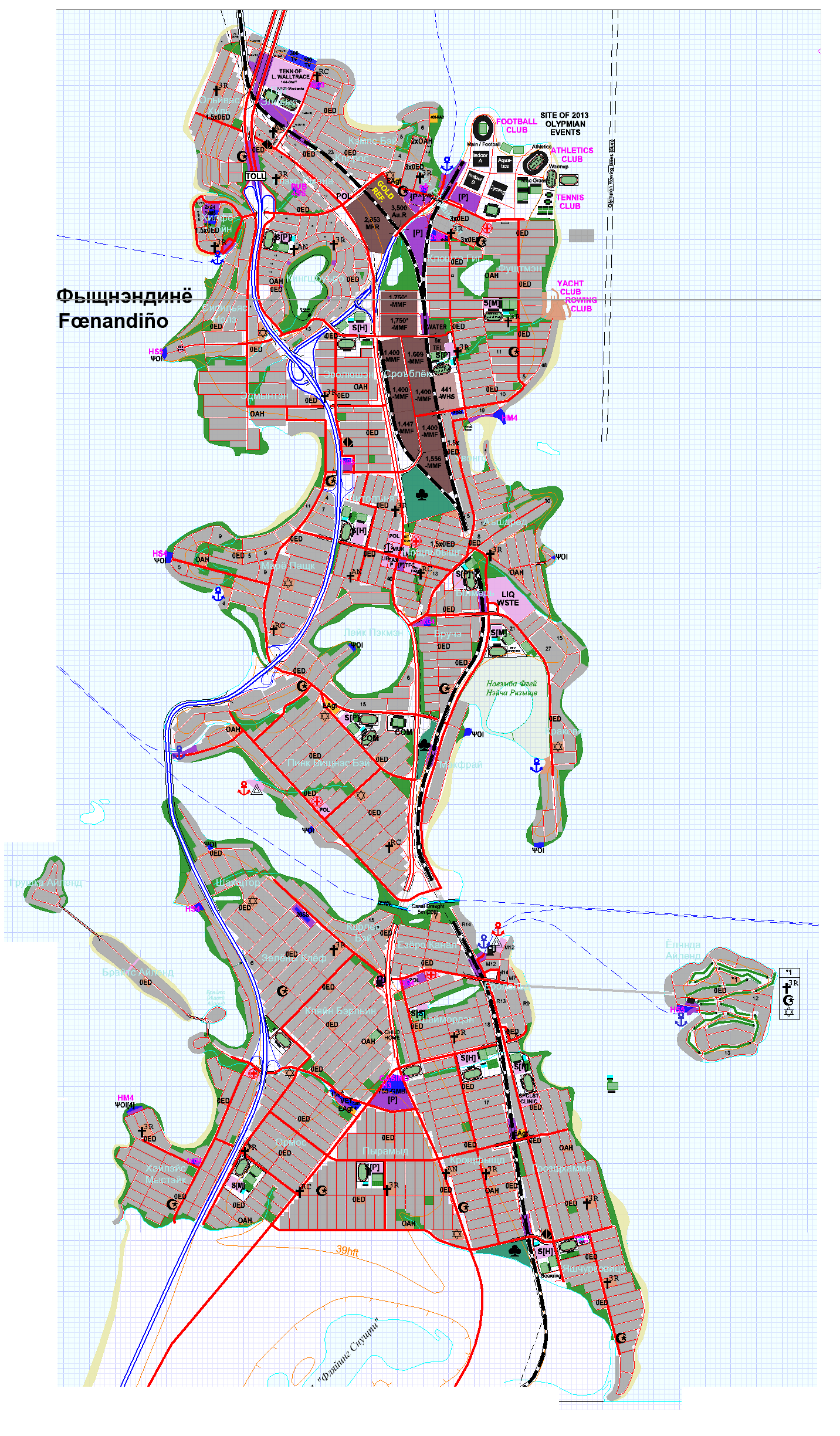 Designing a city map is a layered process so here are your layers (or steps).

Define the physical location. The basis of which is a topographical map. This should include elevation, rivers/streams/lakes (I could have just said bodies of water I suppose...), and what the ground is like in the various areas (meaning rocky, or sandy or arable soil etc etc etc, and don't forget forests. There is more to this (any physical characteristic you can think of really)

Step 2: Integrating it into the world. Its a simple matter (relatively speaking) to define a single location, making that location fit into the grander world is more complex. You don't want to define a single location without thinking about how it fits into the greater world, thinking about this up front can be helpful. This will help you define what type of city you are creating. Is it a crossroads that becomes a trading center, is it near a border and did it spawn from a central border fort? More specific to designing the city it will help you make sense of where roads should go. In many cases you have roads (or at least paths) long before you have a city.

Example: using your brief idea mentioned in the OP think about this

This is a really simple situation but thinking about how a city fits into the world around you helps define what you are looking to create and provides logical consistency later without forcing you down certain paths you may not like.

How big is your city (geography and population) how densely populated is the town? To get an idea on how big you want it look at this list: Cities by population density. That should help you define size vs population. Once you have that you can define what type of city it is. Was it originally a fort? Is it a walled city on the plains? Is it a mountain mining town? Hidden forest retreat...you get the idea, this list could go on forever. Other things to think about:

At this point you have geography, roads, city flavor and style, relevant sections of town and you can simply fill in the details at your leisure. Keep in mind older cities tend to follow geography while newer ones tend to grid things out.

Grab some maps, same scale, of cities of similar age and climate (and ethnic origin) of the one you intend, and copy-paste them in an image editor until you are happy with your city.

Print the result, and then, start again by hand (either in paper or on screen) copying the features you want from your collage map to your brand new map.

I would really not recommend to use Sim city (whatever the version) to make a real fictional city. The transportation system is the main problem, it's almost impossible to create something plausible because the Sims are too dumb/lazy.

I think the main aspect with mapping a modern city is about the transport system. I make the assumption that the city is quite large with over 1 million people.

I started designing a city not long ago, here's the process I used :

My first recommendation would be to find 2-3 cities that exist that are close to the features you want in the city. Then you need to know the history of the city you are creating (at least a few rough ideas. Was it a fishing community? shipping? military port? Then steal ideas from other cities that have these features. Never hurts to model on the real world when you can to help with making your city feel more realistic.

There are plenty of map-gen out there.

So it depends on how whether you want something uber-realistic (in which case, why not use a real city and call it a different name, ala Gotham or Metropolis?) or something which may be optimized for story-telling?

Part of this is going to be where your city is set: weather and history play an important part. For example you're not going to get a thousand year old city in N or S. America. Any city that wasn't built on reclaimed land, or otherwise reliant on newer technology/trade has likely been around for centuries in other parts of the world.

I'd probably just mash-up some maps of already existing cities in appropriate climes.

As an Old Dungeons & Dragons Gamer, use graph paper. If it's necessary to see large scale there are places you can buy 3'x 4' sheets. Scale as needed. Decide "what" you need in the city. Then assume a certain size for your streets, alleys and roadways or possibly elevated rails, railroads and subways. Colored pencils (there's a reason for pencils over pens - you can erase) are good to designate ground level, below ground and elevated areas. Using your street widths set your buildings in place, on average all your buildings CAN take up the same footprint. If you decide this is not good then set a square to be a certain size say 10' x 10' and size your buildings appropriately. Decide on rivers, lakes, ponds or other features such as storm drains (not the storm sewers - but the big tunnel type), caves or whatever. Rough draft your placements before you commit them to your larger sheet.

You can use standard ruled 8 1/2 x 11 graph paper to layout the interiors of any buildings you need to "see" the layout of. I use 1 sheet for each building if one level or multiple sheets if more than one level. You can always make assumptions as to sizes. A standard street lane is about 10 feet wide. Two lanes 20 feet, inner city with street parking add 6 to 8 feet per side. Sidewalks add another 8 to 10 feet again. City buildings maybe 30 feet by 40. Some bigger some smaller.

Unless it's important, you don't need to layout things as sewers, water, electric or gas. Really the most critical issue is to sit down and decide WHAT you want to have in it, place the important things then fill in the rest later. It really doesn't matter if all the buildings have a use or a name. How many of the little places do you pass everyday and don't really notice? You mostly remember the important ones. Those are the ones you want to flesh out in your descriptions. That gives you an option to "use" them for something later if you need a place to do something in your story you didn't anticipate or think about earlier. Knowing your story figure out what the settings are and what you need to have in it, then you can populate the "city" with what you need to have.

Hope this helps in some small way. Either way have fun with it. You're the one making the city. Set your imagination free.

A point to consider is that most cities do not spring to life all at once, but grow organically. There is a small settlement, or several in the area of a large city. These grow into small towns. As the city grows, the small towns are absorbed but the lines and roads of the original town are still there. This can be repeated several times as the site grows, with settlements around the area at river crossings growing to towns, then some towns growing to small cities and then the area between is filled in as the major city grows. But you still see echoes of these old centers on the map.

Not the answer you're looking for? Browse other questions tagged cities worldbuilding-process .

33
How can I ensure my cities don't all look the same?
3
Is there a best place to begin Neo medieval world building?

8
Desert City - agriculture and other specifics
33
How can I create a map of an underground city?
38
Creating a realistic world map - Countries Borders
12
Rules for the Development and Spread of Urbanisation
1
Mozart city proposal
7
What are the elements required for an enclosed prison-city?
8
Creating a Realistic-Looking Rocky Moon