Feasibility and challenges of a kingdom existing within an eternal night?

Okay, so admittedly I was going for a title that was a bit more catchy than the actual question, but not by much. On a technical level, the real question is "Feasibility and challenges of why a large stretch of land might have little to no sunlight", but with the idea of it being eternally night. Thus, moonlight is allowed, but so is limited sunlight to simulate something akin to dusk.

The basic premise is that the land is lorded over by vampires. Vampires in this setting aren't destroyed by sunlight, but they are weakened by it. Thus it isn't as if there can't be ANY sunlight, but it should be limited. Also, the land itself is a long strip of land that borders a body of water on one of the long sides and a mountain range on one end of the land where a castle resides.

The type of answer that I'm looking for is one that can explain how to achieve "eternal night" through various natural factors. Bonus points for answers that make beautifully clear night skies (not necessarily all of them) a possibility. Details, suggestions, and ideas below...

If the planet in question were actually a moon rotating around a gas giant, you could potentially have one side eternally facing the sun, but still have tides due to the rotation around the gas giant. This would create ocean currents and theoretically prevent the problem of the dark side freezing and the light side burning to a crisp. So you have the majority of the moons population living on the light side and your vampire race living on the dark side. On the dark side, the 'day' would be partially lit by the reflection of the sun off of the gas giant and you would still get your beautifully clear night sky.

To deal with the problem of food, it is possible that the tides and currents bring nutrients and single celled organisms to the coasts of the lands on the dark side and a food chain exists on top of this as well as other bacteria and fungi.

Combos are possible. Chasm and volcano match well together from a geological point of view. Permanent eclipse can also have effect on the crust and trigger geological activity.

In a world where vampires and to some degree magic exist, then these can be considered natural factors.

The land of eternal night is caused by a magically created optical barrier floating above this territory. This is effectively a one-way mirror reflecting back most of the daylight during the, what we can only call, day. Effectively it will be no brighter than dusk, but the vampire territory will languish in permanent night.

It can be assumed that once it was created magically this mirror layer will remain there until the last vampire is gone. This will save on having to renew the magic to keep the mirror layer functioning.

There is no need to assume that this mirror has a solid or particulate surface, it is merely a surface where light is reflected by the optical properties of the space constituting the layer itself.

I wondered if there were such a place. Lake Maracaibo is pretty close.

On a good night, one lake in Venezuela hosts thousands of lightning strikes every hour. The phenomenon is known variously as the Beacon of Maracaibo, Catatumbo lightning or – cue dramatic roll of thunder - the “everlasting storm”. That last one might be a slight exaggeration but where the Catatumbo River meets Lake Maracaibo there is an average of 260 storm days per year. 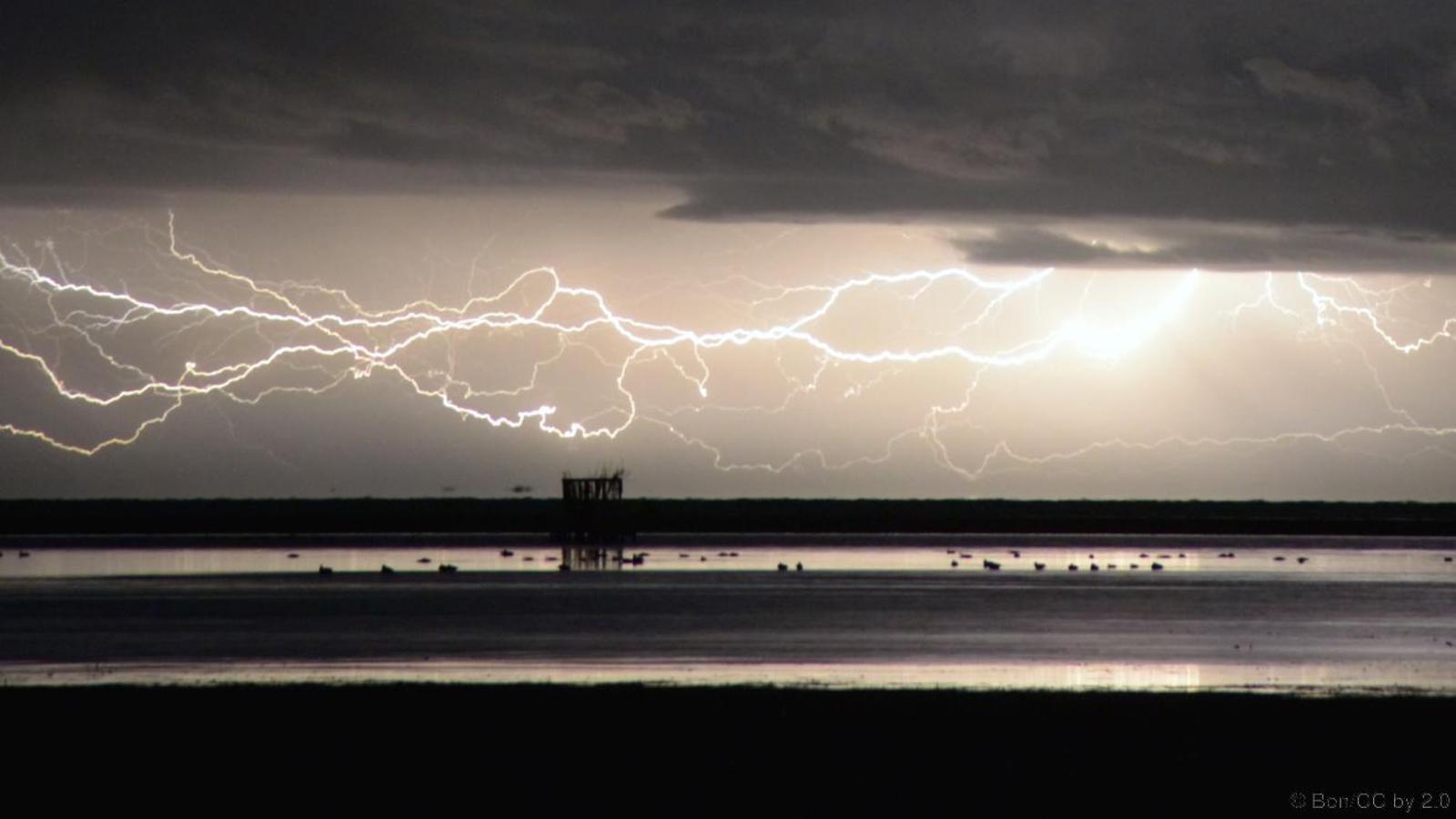 My read from BBC and Wikipedia is that wet winds come in off the ocean, come across the lake and associated swamps and get wetter, then hit the mountains and are forced upwards. All that water condenses into clouds. Wet ascending air turning into clouds happens in many other places; it is apparently still unclear why in this particular region it also so regularly produces thunderstorms. Supposedly the lightning is so frequent and predictable that it is used as a sort of lighthouse by ships at sea.

Any real thing can be exaggerated in a fiction. So: your marshy vampireland sandwiched between mountains and sea has thunderstorms all day, (almost) every day. Lighting is good for drama, but heavy low cloud cover is not too exotic and it can definitely make it dark. Not as dark as night: plants can still grow.

My read of Lake Maracaibo is that the storms come in the evening. It would be nice for your land to have storms come near sunup. That way the children of the night can see the moon and make their beautiful music.

There's a really simple solution here that I'm surprised nobody has touched on.

You simply have it in really northern or southern latitudes, and have the planet have a minimal axial tilt. Orient the mountains so that they're towards the equator, and you have even more of a barrier to sunlight.

Essentially, you'd be living in Alaska, Northern Canada, or Northern Russia. Not the most pleasant place to live, but it's possible. The thing with those places though, is in one season, they're essentially all night, all the time. And in another, they're all day all the time. With a minimal axial tilt, you'd have to go more north to get the all-night effect, but there would be significantly less variance. If you make the world, in general, a bit warmer then you can deal with living in the land of permanent ice and snow.

The issue that comes up is food, but with sunlight on the other side of the mountains, you could easily grow it there. Plus, depending on time period, shipping it in is an option. It won't be as fresh, of course, but food is food.

How they make their money is also why they live there. I'd go as far as to say they could even farm an uncommon flora or fauna that thrives in the dark conditions. They found this place that's eternally dark and while most people turn away and say "NO!" someone saw dollar signs.

(As an aside, don't forget about the wonderful issues that crop up with people living in dark areas for extended periods. Might want to mention constant migration - New people in looking for money, others leaving because it's super depressing)

You could have a nuclear-winter-like scenario where some arbitrarily large amount of dust was blasted into the atmosphere, concealing the sky and therefore the sun. As for challenges, though, it would be implausible for there to be humans, due to the impossibility of agriculture. Trade would be necessary, but if this is, indeed, a planet-wide phenomenon, there would be no viable trading partners.

Or, if you're already using vampires, you could introduce some sort of magical effect making it eternally dusk.

My favorite answer is Andon's- put them near the poles on a world with very little tilt.

But my runner up would be to just put them near the terminator on a synchronously-rotating (tidally locked) world. Or close to it, anyway. If the planet rotates such that it experiences one solar day every, say, 5000 years, you'll still get many centuries of nighttime and twilight at any given point.

If the world's orbit isn't perfectly circular and/or its axis of rotation isn't perfectly perpendicular to its orbit, libration and nutation will still cause the sun to move around a little bit in the sky (theses effects can be observed on our own moon if you watch it carefully enough over the course of a month).

This sort of world would have pretty stable weather patterns. If you want a near-continuous warm wind, put it near the equator (where warm air from the day side would flow to the night side). If you want a near-continuous cold wind, put it near one of the poles (where cold air flows from the night side back to the day side). If you want neither, put it somewhere in the mid latitudes. Just exactly how warm or cold the climate is can be adjusted by fiddling with the size of the sun and/or the size of the planet's orbit. Exactly how much or how little sunlight the place gets (averaging over the effects of libation & nutation) can be adjusted by moving it a little more towards the day side, or a little more towards the night side. Since the sun is always in same general area of the sky, and you want this to be a mountainous coastal area, just put the castle in the shadow of a mountain to ensure it gets the least light. The town can get more light while still being in view of the castle if the coastline in oriented at angle to the line of the terminator, such that the town is behind the mountain, but extends outside its shadow.

Not the answer you're looking for? Browse other questions tagged internal-consistency moons astronomy weather day-night .

8
How similar to earth could a planet which experiences a permanent day be?
4
What would allow a livable planet to have an always-night area, an always-day area and a day&night cycling area?
7
Thermal Energy Recycling from Daylight Operation to Power Night Time Operation of Volatile Computer Storage
4
How would a 384 hour day/night cycle on a desert planet affect the weather?
4
Looking for a review of my tidally locked red dwarf planet system specs!
19
I want ten Earth-years long day on my planet. Can I have it?
2
Calendar-Worthy Events on a no-axial spin distant future Earth
3
Climate on a slow spinning planet