Could an entire civilization live in an upside down forest?

In my world, the surface has become inhospitable due to the ozone layer depleting and excessive levels of air pollution. Life migrated to a giant cave (roughly the size of north America) constituted of many "zones" of varying size connected by tunnels. Most of the zones have access to light through holes on the ceiling filled with glass (filters UVA and UVB). Many biomes are present throughout the cave from volcanic ones to "oceans" (giant aquifers) to plains (with grass and everything).

Where we are now:

It's been a few thousand years since the surface has been abandoned and populations' genes pool have strongly derived. They are not exactly different species (they can mate and give birth) but they are very different physically.

One of these populations are the Sub-sylvans (think elves basically) and they migrated to a forest biome. Initially, the soil was just hard rock and the ceiling was dirt from which trees were growing upside down. The Sub-sylvans made their homes in those trees to avoid predators hunting on the ground and not live in obscurity because the leaves were blocking most of the light coming through the ceiling.

First of, fruit creation takes a big toll on a tree so it wouldn't make sense that those tree would make any especially because you don't want the seeds to drop on the ground but on the ceiling.

Second, the only reason trees grow tall is to take the most light in real life which wouldn't be the case in my setting. My answer would be that the trees get their water from a ground fog. The lower the moister.

Third, because of the leafs blocking the light, agriculture isn't an option.

Fourth, hunting could be an option but it'd be very dangerous and they'd not be able to properly cook the meat because of the ambient moisture.

Those are the problems I am having with keeping the tribe alive and in that particular biome. How do the Sub-sylvans survive and sustain themselves in this environment?

The level of technology is what you'd see from medieval civilization. They have gunpowder if needs be.

There are a few remains of advanced technology from the surfaceans (Nanotechnology) so if it can help them I am willing to accept the answer.

They are in very bad terms with the other 2 principal tribes and trading with them is not a viable option. The other 2 factions would rather let them starve and take control of the zone afterwards.

I would rather they did not simply cut some trees to make room because they basically worship the forest. It could be a last resort solution and I am hoping to use something else. They also know that the whole wasteland surface is due to the surfaceans cutting trees all over the place without any concerns.

As said in one comment your world as-is won't work due to lack of light and other problems.

Caves with (semi) natural (glass-covered) openings will not allow for a rich forest (inverted or not). If You enlarge too much the openings you'll have structural problems with both the transparent "windows" and the cave ceiling.

Even ignoring that any "window" (especially if near-horizontal) needs to be cleaned, otherwise dirt will accumulate till it's not transparent anymore, there's structural problem with large glass structures which tend to crack when under the (huge) pressure given by normal Earth crust movements (no need for real earthquakes).

You could change the setting putting a huge forest on the surface and having the roots penetrate in the caves and feed some parasitic vegetation (fungi?).

You can have Your elves to live in this strange looking underforest composed by fungi and likens, in a very soft light even by day. "real" plants could grow in patches near the "windows"

Fungi could be symbiont providing something useful to the forest.

Please note real caves have the ceiling composed by (bare?) rock and the floor covered with mud. There's good reason for this as any underground cavity with ceiling composed by dirt would collapse quite soon. Roots should enter the cave from crack in the rock or have some specific system to "drill" the rock themselves (some roots have this capability).

Make them eat leaves. In a world with this kind of forest and well into the future, a lot could have changed. I do not know what your humans did before destroying your world, but maybe they even did some genetics to make those two options even more realistic. Maybe they invented this to solve some kind of hunger problem. Maybe it somehow evolved naturally, just like an fantasy underground upside down forest did.

You can do this in two ways:

1) The leaves of those magical trees are enough even for us humans. There are already several plants that get eaten by humans, take spinach for example. Those trees might have even more nutritious leaves.

2) We are dealing with a new species here. Make it possible for them to digest cellulose. That way they can just eat whatever plant you want them to eat.

In both cases, you should consider them eating some additional food, insects for example come to mind or some roots - just to supplement their nutrition. They are human after all.

I propose your upside trees make loads of sweet sap, which the elves tap as though it were maple syrup. This fits with the tree worship angle: just as the Hindu religion venerates cows because they nourish us with their milk, the trees are mothers which nourish with their milky sap.

Living on syrup would be a very low protein diet. The solution: beer. Yeast can make all the amino acids we need given some sort of nitrogen to work with. In regular beer this protein basis comes from malt. Your elves could use cave biofilms, which are microbial communities with the power to fix nitrogen. 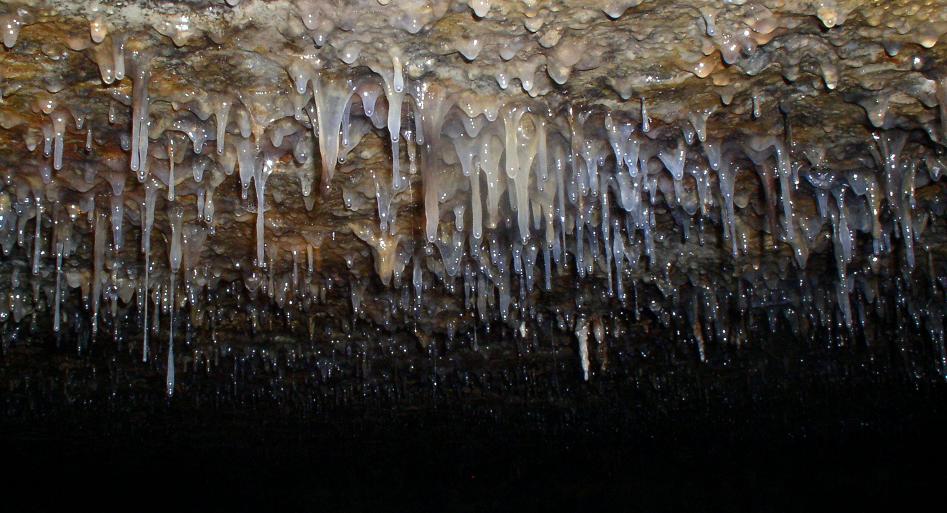 Plus the cave slime gives the beer that great cave flavor.

This yeasty beer, perhaps garnished with some leaves mint julep style, would be all the nutrition the elves need. Visitors attending upside-down elf parties should come with a harness and strap in, because when you are drinking it is hard to keep up with these elves and easy to lose your grip.

Not the answer you're looking for? Browse other questions tagged biology environment medieval fantasy-races or ask your own question.

114
Could a Dwarven Civilization Exist?
10
What would the eyes of a cave-dwelling race be like?
5
What would the weather be like underground?
7
Could a plant-like forest or jungle form in an underground lava dependent ecosystem?
7
What would happen if a volcanic cave was connected by a tunnel to a frozen cave?
33
What projectile weapon can replace a bow under the following circumstances?
6
What tree type grows into the most dense forests?
5
Seasonal Shade-Plant
6
Foraging behavior of a forest slime
9
What Would it take for Trees with Stone Core to be Self Supporting?