Is this fire-breathing creature possible? [duplicate]

I would like to design a creature, that could defend itself by breathing fire.

This creature would look like a little lizard probably evolved to be fire resistant. We could also say that he has little wings on the side like the "draco taeniopterus" who as a wing like membrane between his legs and arms.

I don't know where he could live, but i thought of tropical jungle, so that if he starts a fire, it won't last long due to the humidity.

For him to breathe fire, I thought of two scenarios and you can tell me which one is the best.

-First scenario: the fire lizard (let's call him like that) can process a sort of photosynthesis like plants; his skin is covered with chlorophyll. he is then able to break water molecules to take the hydrogen and release oxygen (thanks to light) he then stocks the hydrogen in a pouch. When he needs to defend himself, he releases the hydrogen from its pouch (blows it) then creates a spark (I don't know ho exactly yet) to ignite the gas cloud. He breathes fire. He then needs to restore hydrogen so he just needs to expose himself to sunlight on the canopy and spread his wings so he has a bigger chlorophyll surface.

-Second scenario: he can obtain methane while his digestion. He stocks the methane in a pouch. When in danger, he releases the methane and blows hard. Finally, he creates a spark that ignites the whole mixture (also because it enters in contact with the oxygen of the air.

For evolution question, we can say that it started by an idea of spraying poison on enemies, but a mutation created one of these processes...

which scenario do you think is the more plausible. Feel free to comment and tell me your idea of how such a thing could have appeared while these creatures evolved

The first scenario is not possible, because photosynthesis (at least on earth) does not produce Hydrogen (water is converted to oxygen and protons (H$^+$)). As an alternative the fire lizard could produce two different chemicals that together create a strong exothermic reaction (aka fire).

The second scenario sounds more plausible. There were already some suggestions for ignition mechanisms of the methane in the other answers (bioelectricity, stones taken in the mouth), one or reacting chemicals could also be used. This also works better with the 'spitting poison' evolution: initially the lizards had some spitting poison and at some point they started spitting methane together with the poison (maybe the just had to get rid of it somehow). Then randomly the poison mutated to set the methane on fire.

Your fire lizard is definitely possible. The second scenario seems the easiest for the lizard to evolve. In order to produce methane, all the lizard needs is methanogens in its digestive system and a place (the pouch you mentioned) could store the gas until the lizard needs it. Intelligence could also be a factor if you choose it to; let's say the lizard gathers rocks it deems appropriate to strike together in its mouth. Once the lizard lets the rocks strike, it can blow the flames on whatever it wants until it runs out of methane. A lizard with a membrane giving it the ability to glide would see great advantage from a fire as the heat can help keep it in the air.

I propose that the creature expel a stream of low molecular weight fat or oil, possibly combined with endogenously produced acetone or ethanol. This would be ignited via a piezoelectric spark.

Expelled flaming gas is not ideal for a weapon: the gas goes straight up and is expended almost immediately. Also and more problematic for an animal is that there is no good way to retain any volume of high pressure gas inside a body.

Oils and fats are different. Animals routinely store quantities of these as energy stores, myself being an excellent example. The lizard could store its fat as a low viscosity oil.

Other lizards will perform one time defensive maneuvers that are energetically costly. Lizards like the chuckwalla that stores fat in its tail will drop the tail and run if there is a serious threat. The model for the fire lizard is the horned lizard. These can shoot blood from their eyes. I was interested to see the stream goes backwards which makes sense - the lizard is not attacking, but is being pursued. 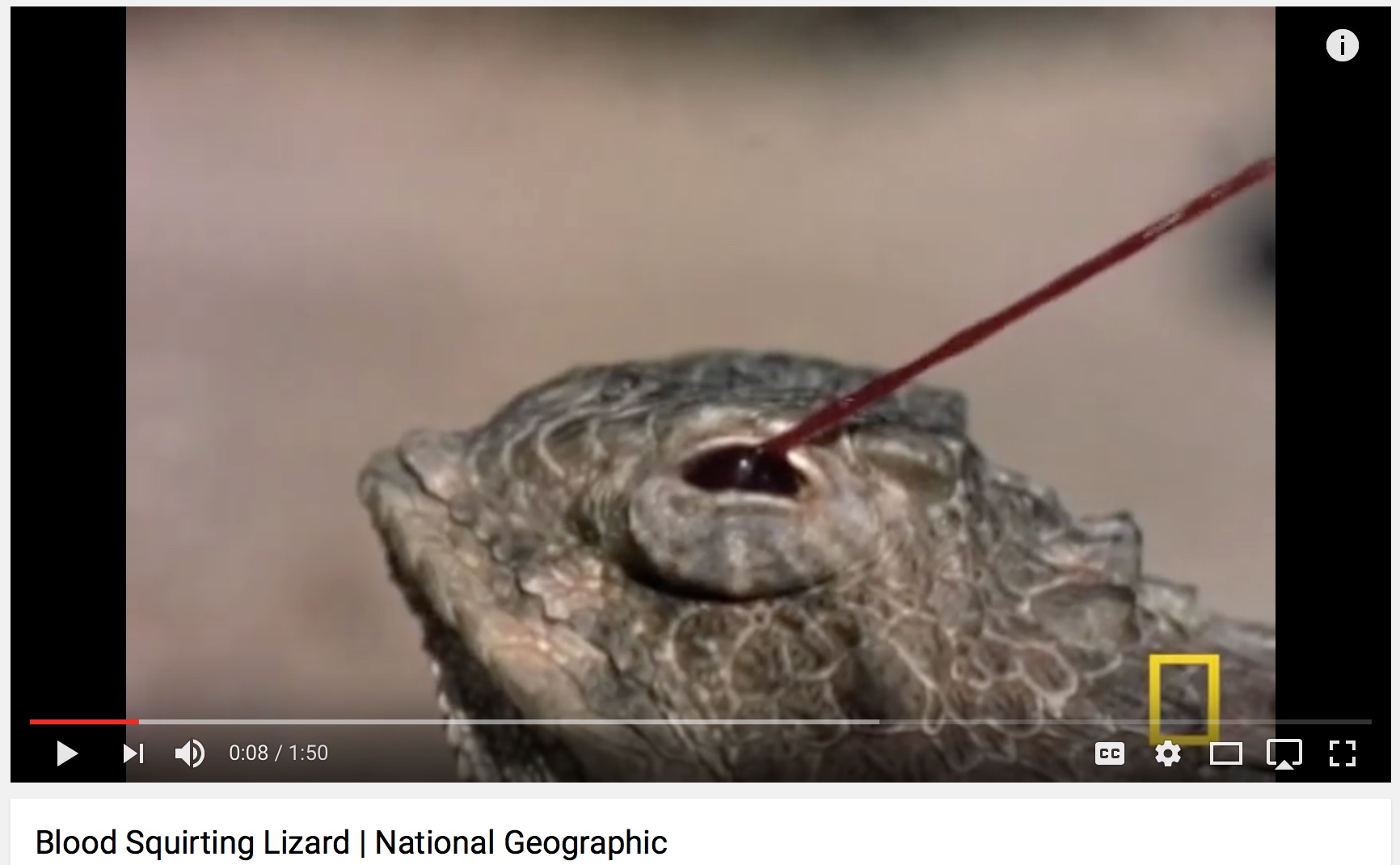 It is not hard to make an oil or fat gooey and viscous. This would be good because it would be adherent as it burned, like napalm (gasoline plus a thickening agent). Here are sailors using napalm as a flame thrower. 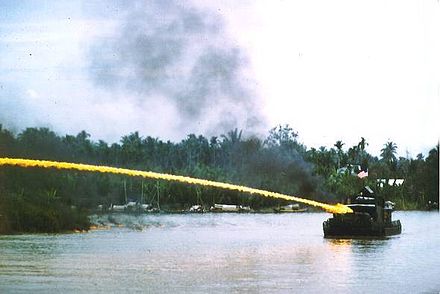 It can be hard to ignite oil. If there were something highly flammable mixed in like acetone (which can be metabolically generated in vertebrates) that would serve as a primer.

What is left is ignition. That is tricky. Piezoelectric materials are crystals which can produce a voltage on conformational change. I propose that this lizard have specialized scales which can do this.

High Voltage and Power Sources An example of applications in this area is the electric cigarette lighter, where pressing a button causes a spring-loaded hammer to hit a piezoelectric crystal, thereby producing a sufficiently high voltage that electric current flows across a small spark gap, heating and igniting the gas. Most types of gas burners and ranges have a built-in piezo based injection systems.

So: the lizard emits a jet of oil / oil+acetone and ignites it with a flex of its piezoelectric organ.

This also offers an evolutionary route. A lizard with energy stores like this which had (by chance) piezoelectric crystals might explode in a fireball on being bitten. Very bad for the lizard but also bad for the predator; if it survived the event it would never bite a lizard like that again - good for the lizards relatives. The next evolutionary step would be lizard which could use this effect without itself dying.

Not the answer you're looking for? Browse other questions tagged science-based evolution physics fauna or ask your own question.

182
How could dragons be explained without magic?
2
What type of organ would a animal need to breathe fire?

41
Is a jet dragon possible?
9
Magically knock someone down and pin them using Science
8
How would an intelligent race on a methane world achieve a fire equivalent?
7
The Project Sahara V2
2
How can a one-gender humanoid species reproduce quickly?
1
Falling in a micro-gravity scenario?
12
How to evolve a reptile into a wyvern, 100 million years in the future?
8
Can you make a star from other gases, and how long would they last?
3
Let's make a thunder creature!